Verboten's tucked in for the winter

Catalina Capri 22 Albany, Oregon
Spent the last two days getting things set up to cover Verboten for the winter. 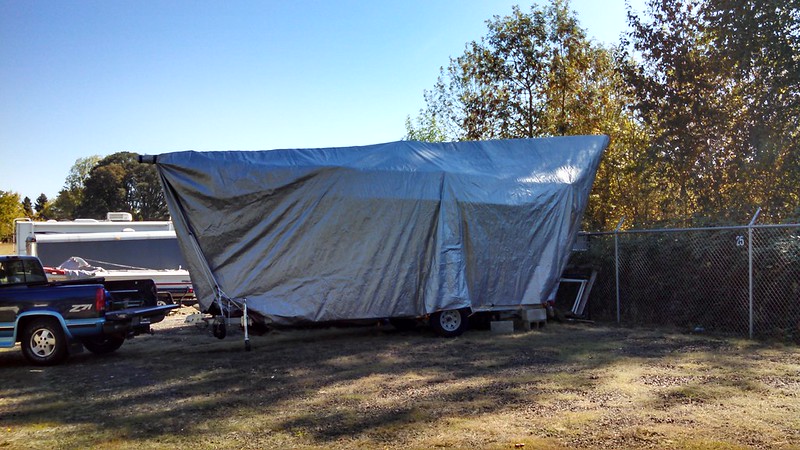 First, I added a mast crutch that goes in the mast tabernacle. Pretty amazing what a difference that makes and I shouldn't have any more issues with it bowing under the weight of any snow we get. I might make a shorter one for when we're on the road so it doesn't bounce.

Next, I decided to replace the PVC frame I've used for the last 6 years. It does ok with the rain but it was a problem with the snow last winter and I was always hitting my head on it when I was trying to do something with the tarp on. I bought a bunch of 1x4's and some aluminum flashing at Home Despot. Two boards are connected end-to-end with a strip of the flashing, which lays across the mast; the boards are long enough to reach from the mast to the lifeline on each side. I beveled the ends of the boards to protect the tarp and cut grooves in the bottom so they "lock" into the lifelines. There are 6 sets from the stern to the pulpit. 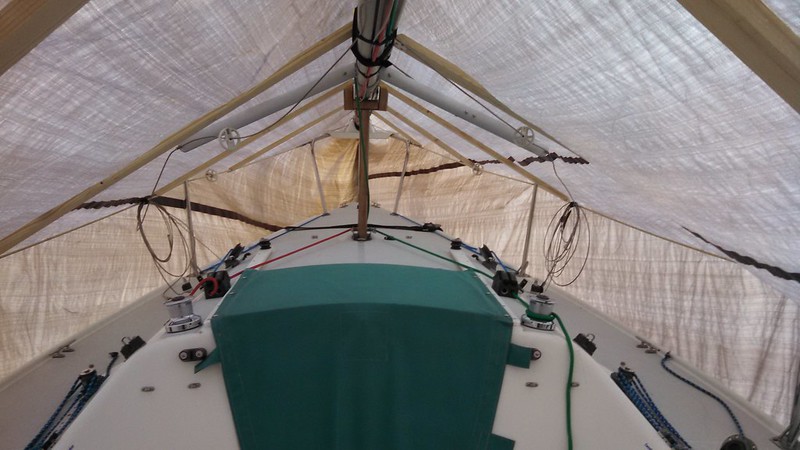 The new tarp is 33' x 25'. It's maybe finished just a bit smaller. It's perfect fit lengthwise, since it covers both ends of the mast. It's also wide enough that I was able to pretty much close up the aft end of the cockpit, something I've never been able to do in the past. Unfortunately that means it's dragging on the ground at the front, so I got out the scissors and cut a section out of each front corner. Tarp clips replace the grommets. 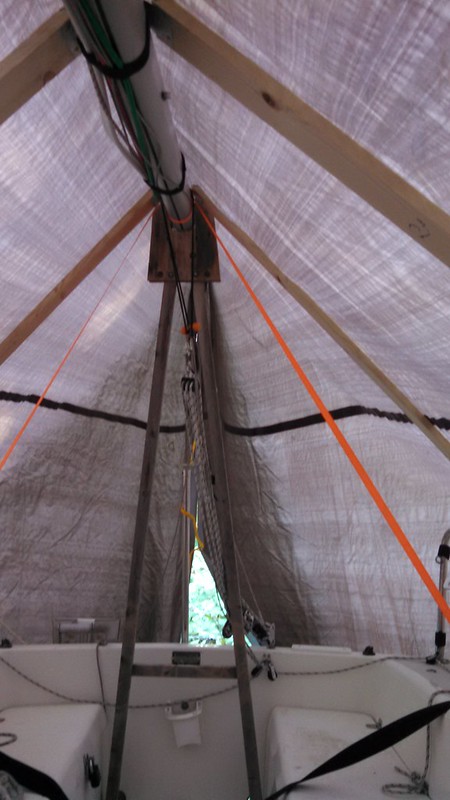 The final thing I did, since the new tarp covers the normal spot where I mount my solar panel, was to mount the panel on the fence behind the boat. It took a while to come up with a workable solution but I think this will be enough to keep the battery from going flat over the winter. At least once the trees lose their leaves it should have better coverage. 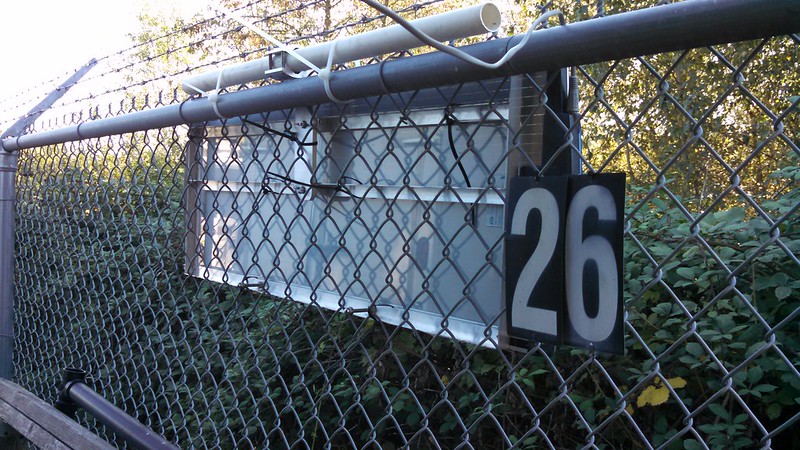 It will be interesting to see how this setup does. In the past I've had the ends of the tarp open and the solar panel bungied onto the wooden mast crutch in the cockpit. When the wind comes up from the south, as it often does in the winter, the tarp would balloon out some but the wind just went on through (generally leaving leaves in the cockpit). I'm hoping this setup will keep the wind and leaves out without holding so much moisture things get moldy. Which reminds me I need to get some DampRid for the boat and the travel trailer.
H

I still have one week of sailing left. But I seem to be busy at the wrong hours to get much sailing in during the week.
Oh well, Next Sunday is our "pina-Colata; Tortoise-Hare, reverse PHRF race.
Party afterwards where pina-colata's are served, along with other junk foods. ...

I'll be helping my friend pull out his Ranger 22 tomorrow. Then the following week pull out my Capri, and another friends J-24.

I look forward to having the time to work on my boat. I purchased it January 2014 and didn't have much time to work on it in the spring. Still needs a lot of work to get it up to my "specs".

I do not cover my boat as tight as Verboten. Normally get a 21-22 ft tarp which results in both ends of the cover being open. I leave the hatch open a crack along with the hatchway a crack, to let air citculate. Never leave the hatch open too much or you may find that an animal has made the boat their winter home. A friend of mine came face to face with a racoon one spring.

Catalina Capri 22 Albany, Oregon
I don't seem to have any trouble with critters so much as yellow jackets/wasps. So I keep the boat closed up and the hatch cover on. I do have a screen that goes over the forward hatch but haven't felt motivated to use it in the winter.
H

Catalina Capri 22 Albany, Oregon
The cover keeps 'em out of the cabin. Might try them in the bilge pump and battery box drains though.

Wish I could put them in the black/gray water vents on the travel trailer. Discovered on our camping trip that the buggers had them both pretty much completely blocked. No vent out the top = P U inside! :shock:

859
Assuming you have the vinyl Capri cushions for the cabin and/or cockpit, do you leave them on the boat over the winter? I've been reluctant to do so for fear of the vinyl cracking in the cold (Toronto, Ontario). Not sure whether that fear is founded, however. Would prefer to leave them on the boat as they're rather awkward to store in my basement and garage.

Catalina Capri 22 Albany, Oregon
I do leave the cushions inside but I put DampRid or Dri-z-air in the cabin to keep the moisture down; I usually change it out mid-winter.

The cockpit cushions all go up in the v-berth, with the v-berth cushions. I put them all on their edges so air can get to most of the cushion. The quarter berth cushions usually get pushed about half way back into the stern bilge - enough to let plenty of air reach all sides. Haven't had any issues with cracking but our weather generally doesn't get or stay below freezing very long.

The only cushion that's currently at the house is the small v-berth one. We don't usually put the board in so it stays at the house.

859
Thanks - you've spotted my concern, ie the fact that we get long stretches below freezing up here in Canada.

Would be keen to hear any input from anyone else whose Capri is stored in similar conditions.

Capri 22 MK1 659 Canandaigua Lake
I strip all the cushions and sails off of the boat and keep them inside (under the bed's, etc.) I leave my bin lids open, and the forward hatch and lazarette covers slightly ajar to get air circulation under the tarp. If any critters are tempted to move in, at least they won't be making holes in my cushions and sails.
You must log in or register to reply here.
Share:
Email Link
Top Bottom