To Drone or not to Drone?

San Juan 28 Comox
Thought I would put this out there as I did have someone who is a “Professional” do this for me and thought it was kind of cool to see what others can see.
A picture was just put on the Good Old Boat audioseastories and it was kind and certainly very special for me to see visually this picture in the article.
I still enjoy the YouTube video...just does not get old. 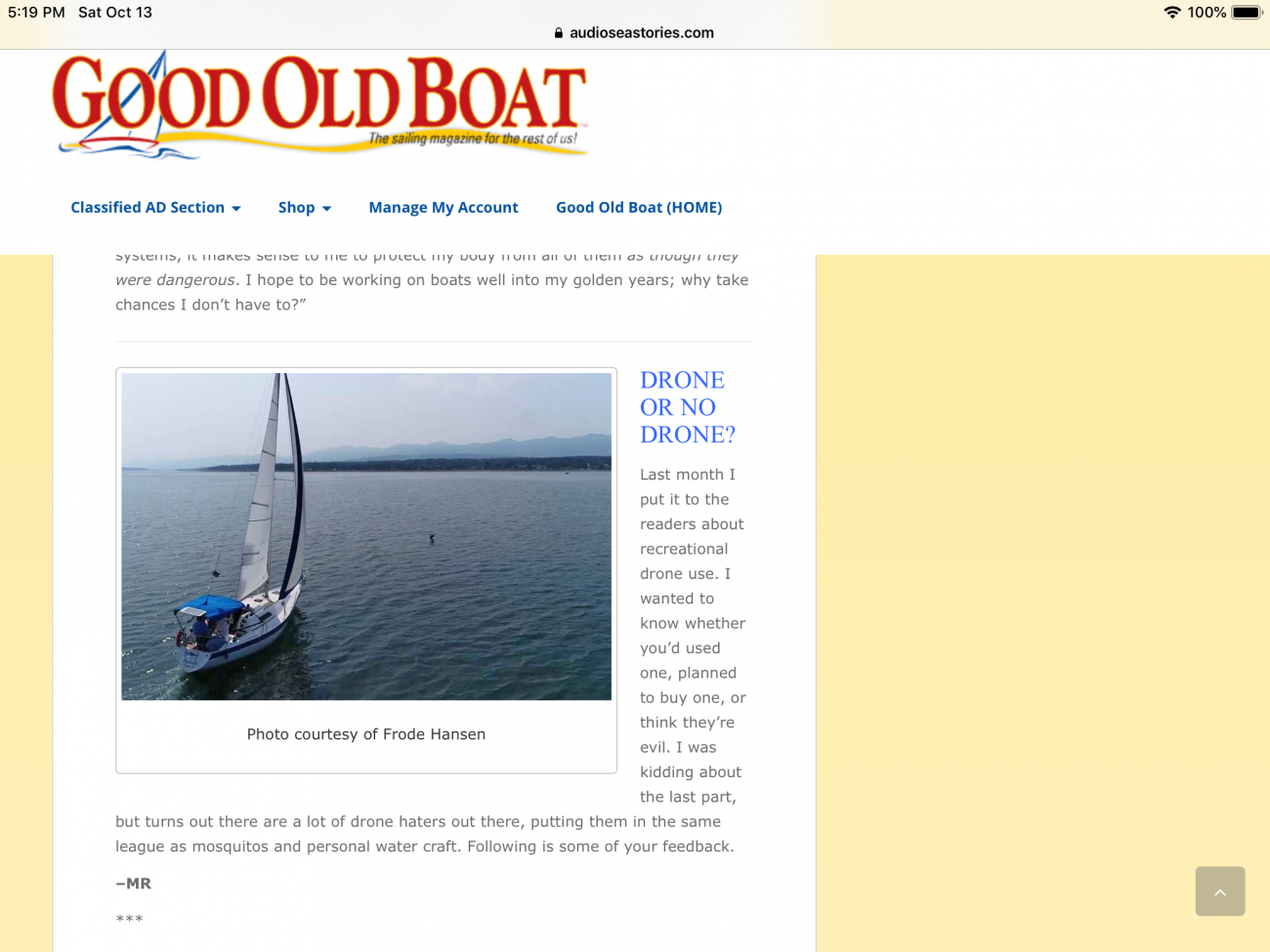 Sabre 362 113 Fair Haven, NY
@Grey wolf it is satisfying to see a photo of your boat published. For those who don't subscribe to the Dog Watch (and you should!) here's a link to the article: https://audioseastories.com/mb_oct18/

There is certainly a place for drone photography and I, for one will be happy when the novelty wears off. When the subject of a drone photography flight knows they are being photographed, then I have no problem. It is when drone operators invade our privacy that I take exception.

I agree with Brandon Ford from the article:

A while ago, my wife and I crossed the Alenuihaha Channel from the island of Hawaii to Maui and anchored about a quarter-mile off Big Beach, one of South Maui’s most popular beaches. We were hot and tired and far enough from the beach not to be seen, so we shed our shorts and shirts. While relaxing in the cockpit in our underwear we hear a buzz above our heads. We looked up into the eye of a drone-mounted camera. What could we do but smile and wave?

I understand his sentiments. Many years ago my wife and I were canoe camping on an isolated lake in the Adirondacks. We had gone swimming and were eliminating tan lines while relaxing in the canoe when a flight of National Guard jet jockeys flew overhead at slightly more than tree top level. As they passed all were in a steep bank but going straight. I certainly don't want some kid with a drone doing the same in a quiet anchorage.

Catalina 22 Vancouver, WA
I think the real question everyone should be asking themselves is: “do my deck-mounted guns have enough elevation to bear on the drones I’m likely to encounter?”

Catalina 320 Barnegat, NJ
Did Brandon know that Big Beach is right next to Little Beach … the nude beach on Maui?
Likes: justsomeguy

Beneteau 411 Oceanis Annapolis
Greywolf: How did your guy recover the drone? On the water?
G

San Juan 28 Comox
He flew it from a beach located nearby, away from the crowds and I was told he can fly it up to 4 km away. I phoned him when we were leaving the marina and then minutes later it was there doing his filming.
I have seen them launch from vessels on the internet but from land it is obviously safer. He also has a licence/training to do this so he monitors air traffic on his radio, etc and float planes.
There are now restrictions put into place for this to prevent close calls. I can see that this can also lead to problems if not handled properly.
Likes: Gunni

A golden eagle grabs a flying drone during a military training exercise at Mont-de-Marsan French Air Force base, Southwestern France.

Following incidents of drones flying over the presidential palace and restricted military sites – along with the deadly 2015 Paris terror attacks – the French Air Force has trained four golden eagles to intercept and destroy the rogue aircraft.

Aptly named d'Artagnan, Athos, Porthos and Aramis – an homage to Alexandre Dumas’ “The Three Musketeers” – the four birds of prey have been honing their attack skills at the Mont-de-Marsan inSouthwestern France since mid-2016

“A drone means food for these birds,”Gerald Machoukow, the military base’sfalconer, told FRANCE 24. “Now they automatically go after them.”

The use of hunting birds – normally falcons and northern goshawks – by militaries around the globe is common practice in the fight to scare other critters away from runways and so cut the risk of accidents during takeoff or landing. But it wasn’t until 2015 when the Dutch started using bald eagles to intercept drones that other militaries started to see the benefit of these winged warriors.

The French bred the four golden eagles – three males and one female - using artificial insemination since eagles areAprotected species and harvesting wildeggs is strictly forbidden. They chose the Golden Eagle because of the birds hookedbeak and sharp eyesight.

Also weighing in around 11 pounds, the Birds are in a similar weight class as the drones they’re sent to destroy and clocking in at a top air speed of 50 miles per hour, with the capability of spotting its target from over a mile away, the eagles are deft hunters.

To protect the eagles from drone blades and any explosive device that might be attached to them, the French military designed mittens of leather and Kevlar (an anti-blast material), to protect the bird’s talons.

A golden eagle carries a flying drone (2017). "I love these birds,"Machoukow toldAgence France-Presse. "I don't want tosend them to their death."

The birds are first taught to attack in a straight line before graduating to diving from heights. Soon they’ll be patrolling the skies over the Pyrenees Mountains in Southern France and could possibly be deployed at airports and special events, such as political summits and soccer tournaments.

AquaCat 12.5 17342 Wateree Lake, SC
That’s pretty dang cool, SG. Thanks for sharing! I kept birds of prey on the ‘90s but for rehab and educational programs only. Never falconry or drone-hunting.