Catalina 36 MK1 94 Everett, WA
Hope it all comes back negative. It’s amazing how quick some of that stuff works!!

CAL 35 Cruiser moored EVERETT WA
Kermie... Are you surprised? We could have used a powerful flashlight in one ear... Get the same results.
Likes: Kermit

Kermit said:
I had a CAT scan of my head yesterday. (Seriously) They found nothing.
Click to expand

It's a good thing too.

Hunter Passage 42 Shelter Bay, WA
Heading to the boat for some water time this New Years day, solo. Likely head for Eagle Harbor or Pelican Beach on the ebb tomorrow. I'm sure things will be crowded...not. Maybe even some sail time, I hope, I hope, I hope.

Grrr. Ditto the forecast, Mark. Barometer falling like a rock. Winds in the mid to upper 40s for tomorrow, easing some Saturday. Blowing like stink all day yesterday, all last night and today. Boat felt like being on a roller coaster. Decided to head for home after visiting John Lund. Just no fun, eh? Of course it is winter, but it would have been nice to schedule the crappy weather for another time. Just say'n.

S2 11.0A Anacortes, WA
Wind storms tend to die out mid to last of jan. There is always a week of good wx in Feb. Hope John is OK

Yesterday we watched our 2006 cruising DVD that had lots of fond memories of our flotilla. In a previous visit we watched our 2005 DVD and before that our 2004 cruise. John remembered most of it, but had trouble recalling some of the places we visited. He seems pretty normal to me; I have trouble with memory at times, too. His boat is still on the hard and he wants his old life back; don't we all.

It is up to his daughter, Holly to move him onto his boat. Once there, I told John I would help him get things back in order. The boat remains on the hard and on the market in south Anacortes. I'm assuming shore power is used to heat the boat, but most all of his personal stuff probably removed. Beyond that, she is ready to provision and splash.

When you spend any time inside the memory care facility where he resides, you can see he does not belong there. Out of respect for the family, I told John that I cannot take him to his boat, but if he can find a way there, I can help at that time. He has the means, but now the will must take over. His car is gone, no phone, no money, no credit cards, etc. Those remain under family control.

I feel bad for my good friend John. Hopefully, he will get his old life back again and soon.
Likes: Will Gilmore

Hunter Passage 42 Shelter Bay, WA
Got my test results back from a recent physical and things look pretty good. Cholesterol a bit elevated, but doc says to cut back some on fatty foods.

2. Colonoscopy found three small polyps, which they removed. Pathology report says that no evidence of abnormality. They classified them as precancerous. Recommended a follow-up colonoscopy in three years just to maintain status.

Whew! Dodged that bullet. Last colonoscopy was 2000. Was supposed to have a follow-up in ten years. Put it off, put it off. Finally decided I procrastinated enough, best to check things out rather than delay.

Recently retired slip neighbor learned he had rectal cancer. Remove some bad parts and he was worried he might have to wear a coloscopy bag, but some therapy worked and he is pretty much back to normal. Another slip neighbor recently passed from pancreatic cancer. He survived but a month after diagnosis. Complained about upset stomach. Antacids did not help. Family is putting his Pacific Seacraft yawl on the market. Nicely equipped boat. He and I had just chatted this past summer.

Beneteau First 38 Lyall Harbour Saturna Island
We gotta do it while we can Terry. You just never know what tomorrow will bring.

Michael Davis said:
We gotta do it while we can Terry. You just never know what tomorrow will bring.
Click to expand

Agree Michael. Today is at hand, tomorrow will happen according to His will. Worry not, for each new day is a blessing. Live it and love it to the fullest.
Likes: jssailem

Growing up as a free ranger in Willapa, WA, in our home built in 1929 by my parents when they were first married, there was one clock in our kitchen for the whole house. Every Sunday dad would wind the eight day clock and set the time. The only other reference we had about time was when the Weyerhaeuser lumber mill in Raymond three miles away would sound a steam whistle to announce shift changes. 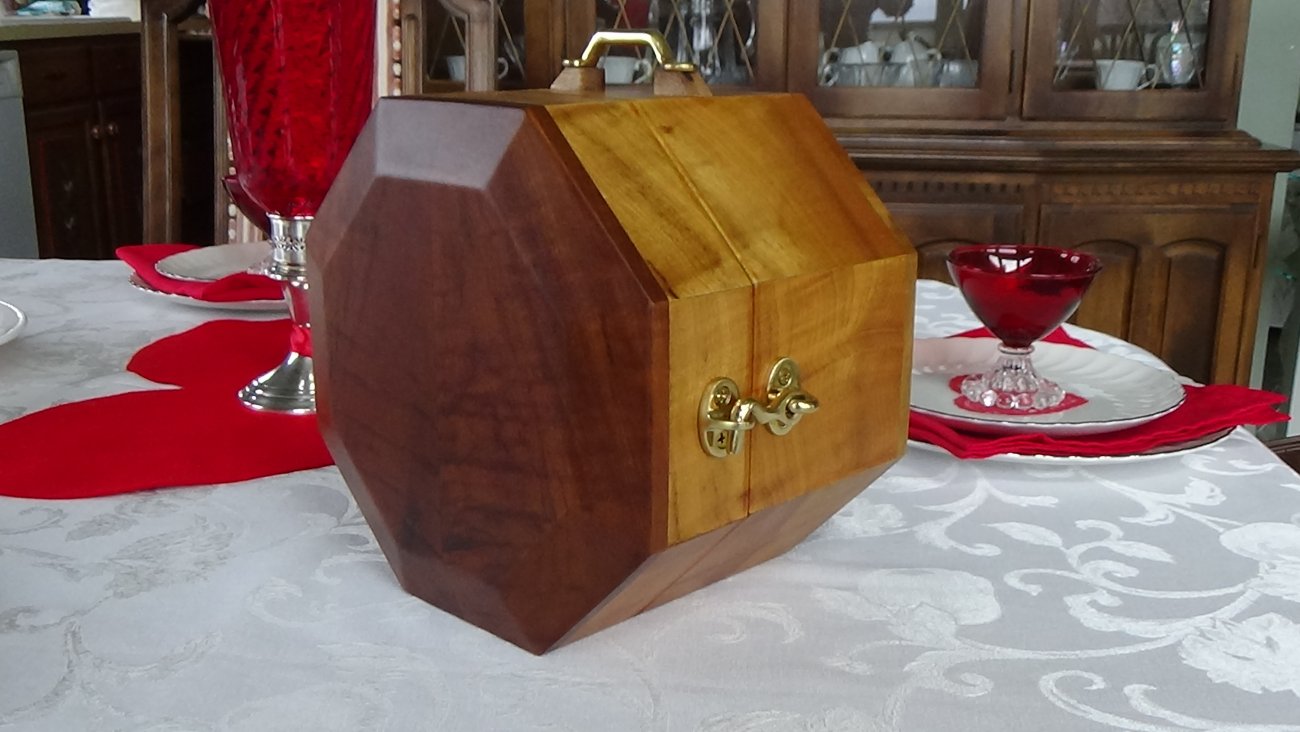 Unsure about where dad got the clock or its age, but the earliest date etched on the inside of a plate by a clock repairer was October 1932. I suspect the clock is somewhat older. Seth Thomas is the maker, of solid cast brass, eight day and eight bells. When dad passed away in 1967, the clock came to me for care and over the years would have it serviced by a local clock shop. 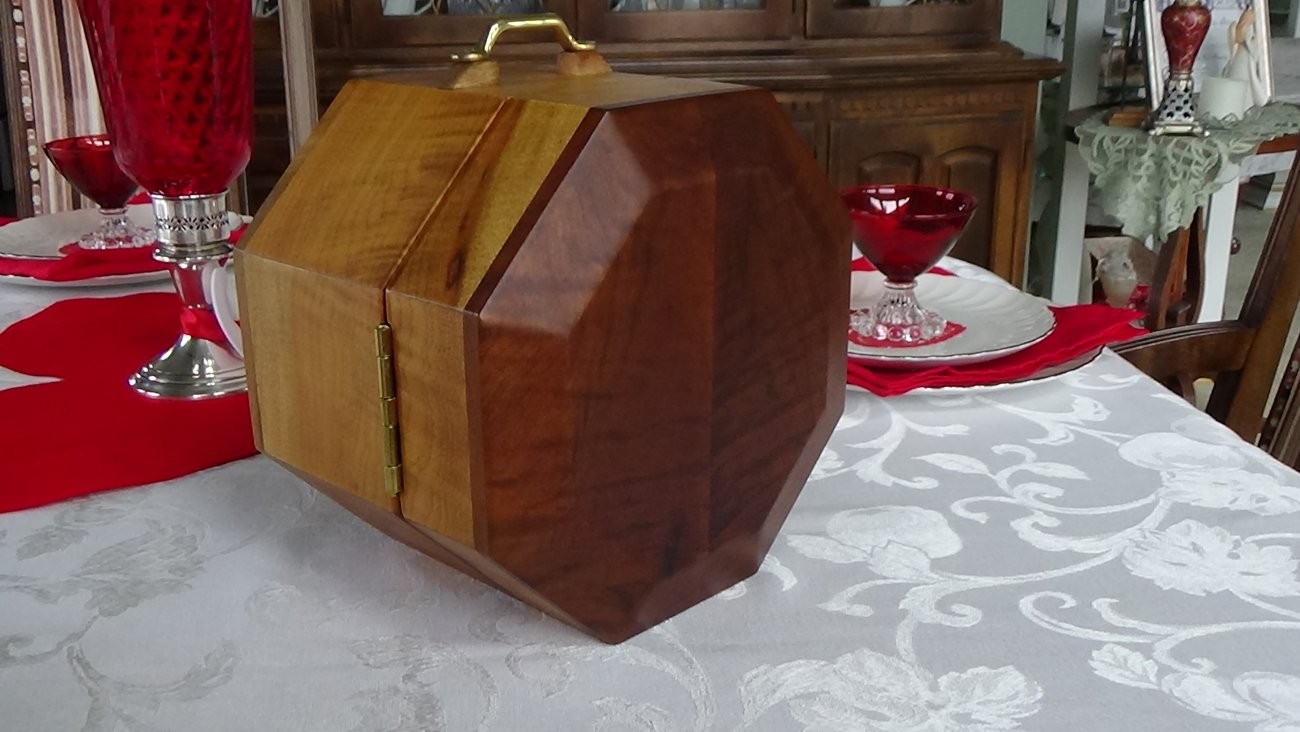 As our family moved over the years so went the clock. While living in Texas for ten years, I learned to oil the clock myself, except for the two barrel springs; time and strike. I also made a mounting enclosure for the clock made of Myrtle and Walnut. It seems to me at the time that in order to remove the barrels required more than my pay grade. When we moved back from Texas in 1997, the clock stopped because the barrel springs needed to be cleaned and oiled. Upon checking with various clock shops, it was $250+ just to clean and oil, let alone anything else. So there it set on my dresser for several years. 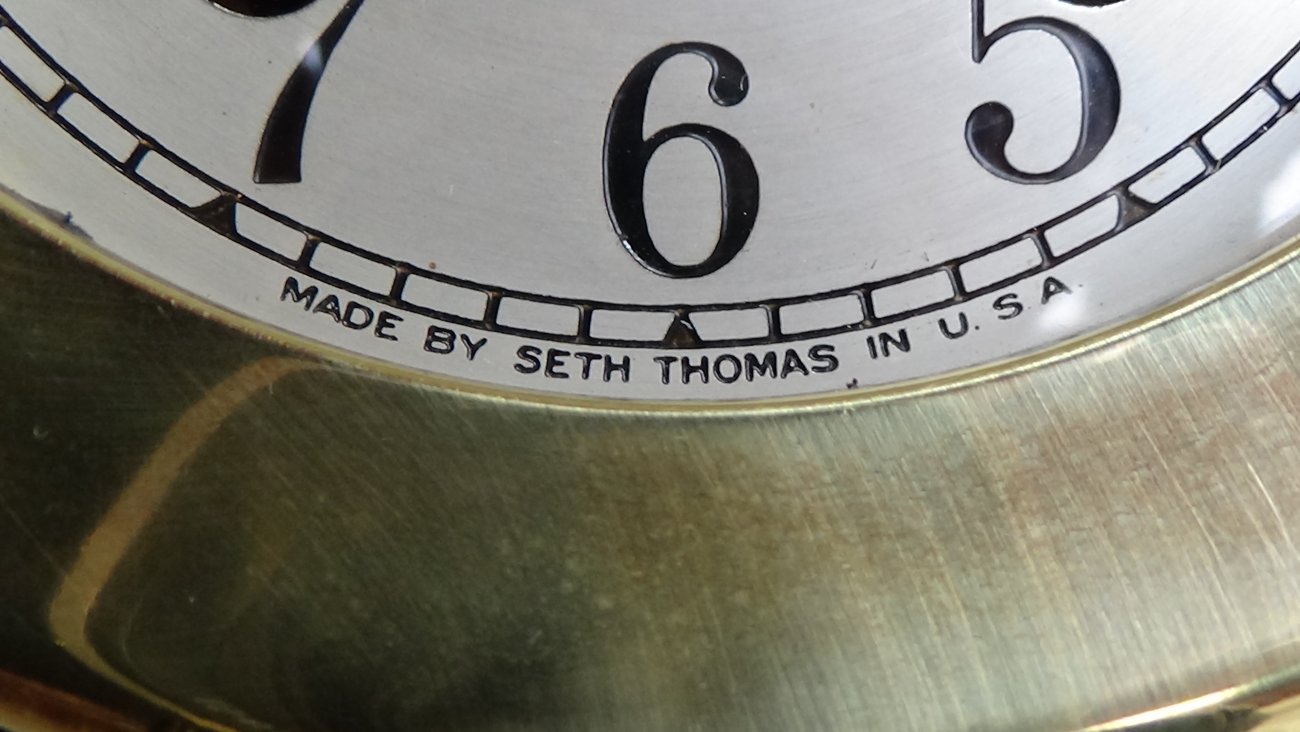 Last year my boating buddy from Anacortes came across a retired clock maker who repaired clocks on the side for a very reasonable price. After explaining to him the clock's history, he took it, cleaned an oiled the barrel springs, and got her running again; his bill $30. So amazing how the eight bells becomes so embedded in your soul after all these years to once again become an active part of your life. 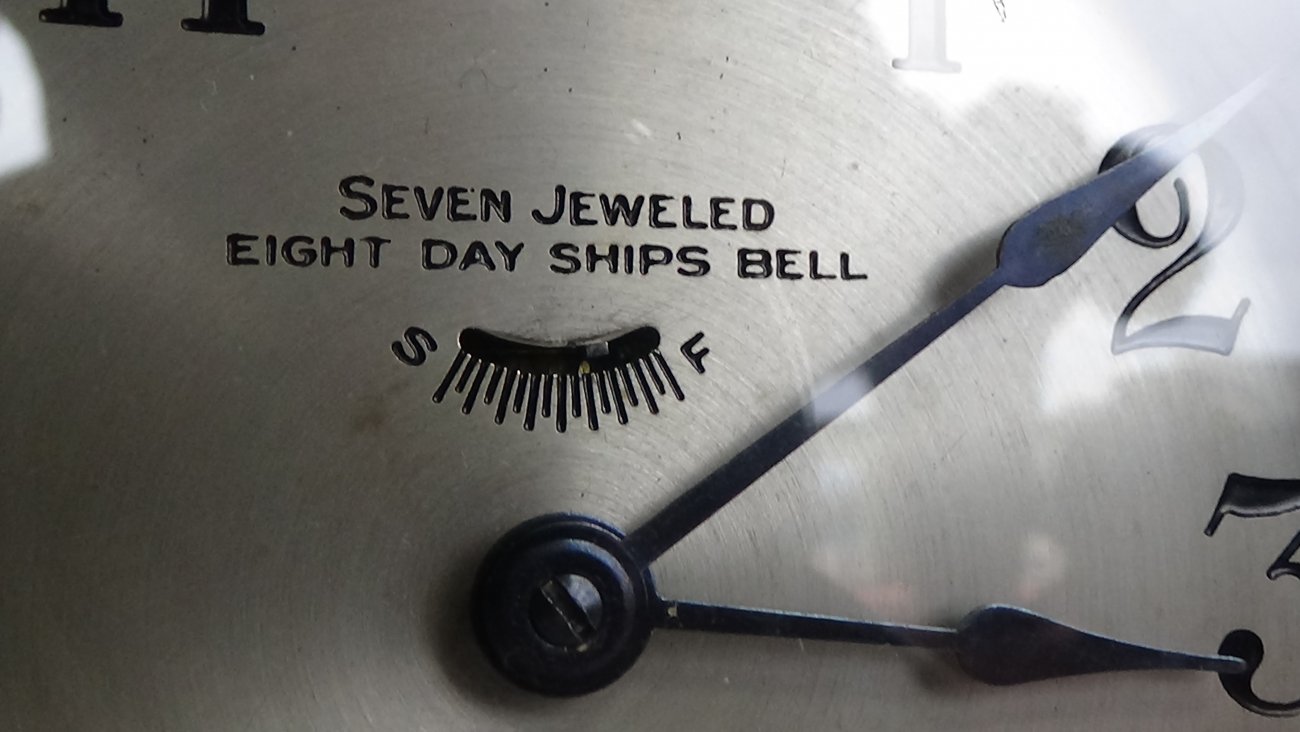 Just finished making some modifications to the enclosure so that I can transport it between home and boat whenever we depart for a cruise. 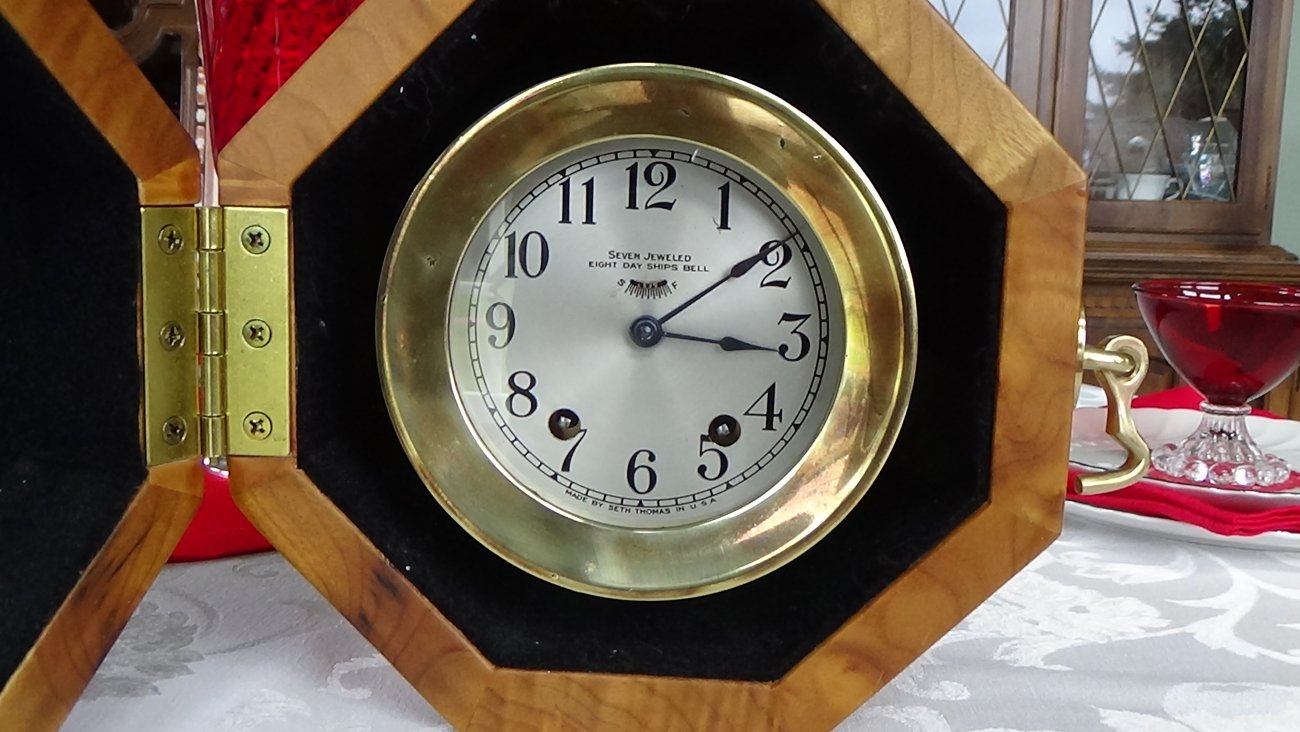 She keeps pretty good time, albeit a bit slow, maybe two minutes a week. Our boat has a shelf above the forward head where she sets with an anchor screw to keep her secure to the shelf when heeling. I also made a plate out of solid brass bar, left over from a Link 1000 shunt boat project, with the inscription by a local engraver that says, "In Memory of, William H. Cox, Nov. 30, 1900 - Feb. 28, 1967". 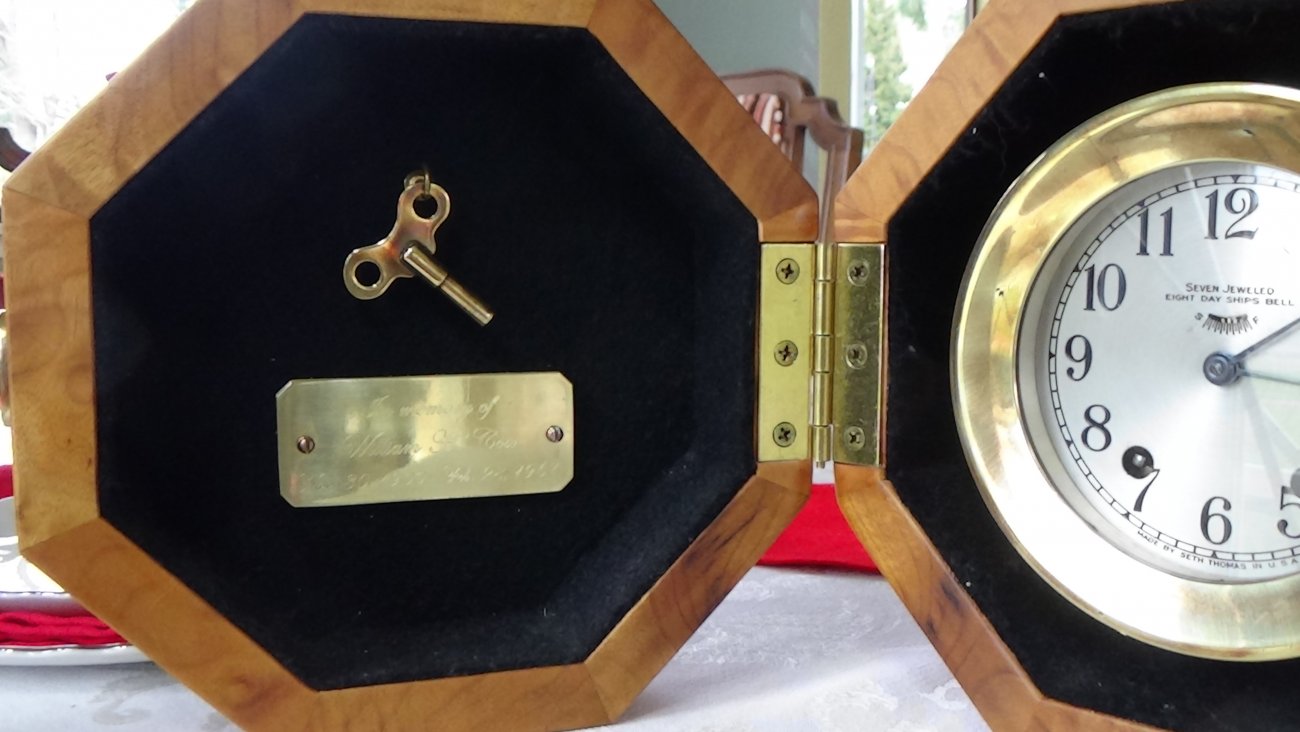 She now becomes a family heirloom, for my four boys to fight over, when it becomes my time for passing. Perhaps it would be wise to hand it down before that happens, along with all the other stuff one collects over a lifetime.

In the mean time, sail on.
Likes: TomY, Will Gilmore, SFS and 2 others

Bavaria 35E seattle
Terry,
That is a beautiful clock and wonderful heirloom. And a great story with it as well.

Catalina 36 MK1 94 Everett, WA
Seeing the first picture I was afraid you bought a concertina to regail us at anchor. @jssailem has threatened me with bagpipes or accordion, I suggested the concertina was a more nautical instrument.
Likes: jssailem and Will Gilmore

O'Day 19 Littleton, NH
Terry, The clock is magnificent. The history of your clock is as beautifully and carefully well crafted as the protective box it resides in. Both add to the clock's value and both protect the clock from loss, giving it a place to reside in your family's life.

Will Gilmore said:
The clock is magnificent
Click to expand

Thanks Will. Quite the time piece.

LeslieTroyer said:
I was afraid you bought a concertina to regail us at anchor
Click to expand

Sounds like a threat worthy of a follow-through. Reminded me of some years ago, while our flotilla was anchored in Cordero Bay on a Sunday morning, two brothers appeared in their skiff, well on their way towards six sheets to the wind. They insisted on singing to us an Irish tune. It would have helped had they had a Concertina handy to aid in their duo, but nice of them nonetheless.


nightowle said:
great story with it as well
Click to expand

Terry Cox said:
They insisted on singing to us an Irish tune.
Click to expand

I know a couple of Irish tunes. Always wanted a concertina to play them on. Didn't buy one in Cork when we sailed into the because $90 was too pricey for us in 1986. Now, I really can't afford them. One of my big regrets.

Hunter Passage 42 Shelter Bay, WA
Just an update on John Lund, a longtime cruising friend from our little flotilla. His only daughter moved him out of the memory care facility where he resided for a few years. Seemed out of place for him and his condition, such as it is, compared to the others there. Family sold his boat and bought some sort of house trailer for him to live in located in the yard of the home he purchased for his daughter and her family a few years ago.

Daughter has been resistant to anyone outside the family visiting him, especially his old sailing buddies. She says he gets quite agitated with those visits and wants his old life back. Can't say as I blame him. I have talked to him on the phone since he made his move and he seems like the same old John; alert and lucid.

Will try to visit him this weekend, if the family will let me. Being just a few months older than me (76), I sometimes wonder when my family will decide that my time is up? Mind just not ready, but the body...?
Last edited: Oct 11, 2019
Likes: jssailem and JamesG161
R

Oday 222 Lake N ockamixon, pa
Everybody is a little different; but at 84, nobody is taking my boat from me. Over my cold dead hands on the tiller.

Likes: AlastairLC, uncledom and Will Gilmore
You must log in or register to reply here.
Share:
Email Link
Top Bottom