The Greatest Sailor I Have Known 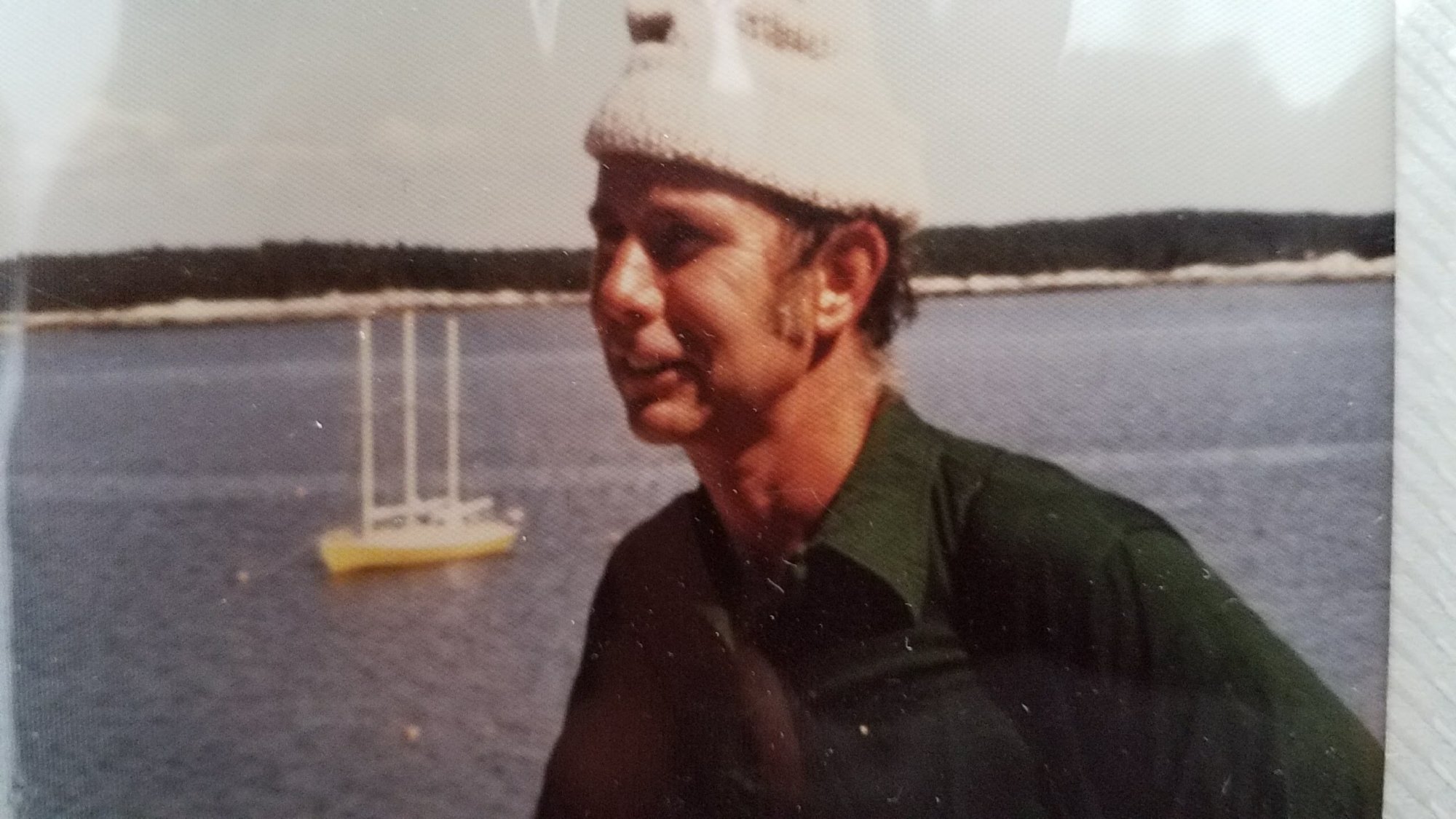 He retired from World sailing with bad knees that couldn't be fixed because of a weakened heart, two heart attacks (the first of which happened while sailing) and a massive stroke. He was struck with multiple myeloma and after all of this, his strength was astounding. He even seemed to be recovering much of his old sharp witted self. He was in pain, for sure, but was more concerned with the lives of his family then his own. It was a tiny fall of two feet from a crouched position, trying to pickup a piece of paper off the floor that broke his hip and sent him on a 150 mile trip to surgery in Boston that really began the end. He returned with a great deal of pain, but even then seemed to be making some progress until he couldn't do it any more. 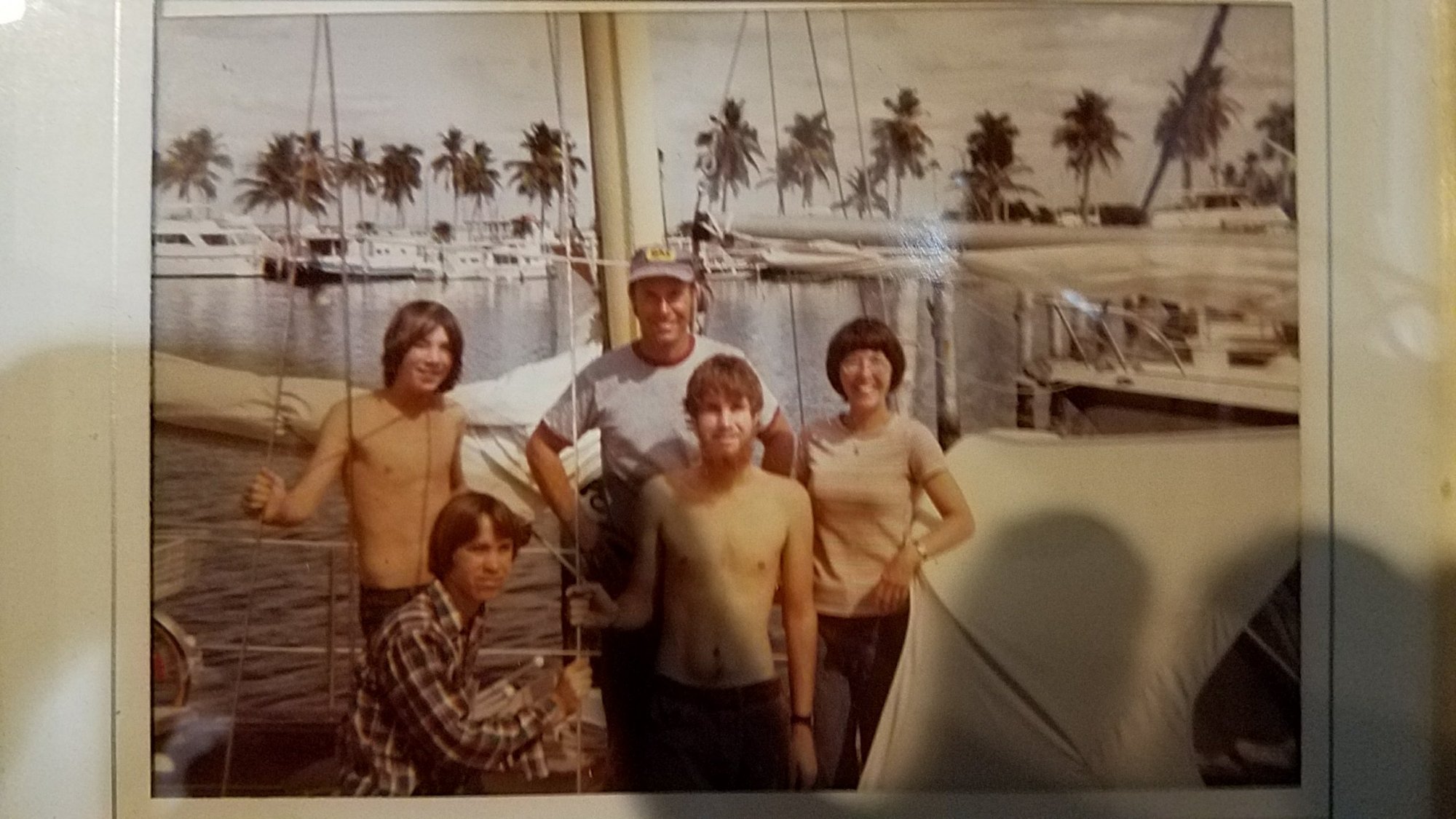 (The Gilmores: me, my father and my mother in back, my younger brother Jim and my older brother Jerry in front)
We, his family are sad, so sad for his absence in our lives, but glad his death has finally ended his weeks of bed ridden suffering. At 85 he had lived a life most would envy.

My father learned to sail in Clearwater Bay on a Clark Mills Optimist. He crewed with Clark's son in Windmill races and became a lifelong friend of the great designer. He developed a strong love for the sea and joined the Navy hoping to pilot shuttle boats between ships only to be made an air crewman aboard a carrier.

After marrying and getting a degree from UF (Go Gators), while starting a family. He earned his 100 ton license and eventually commissioned the design of the Double Eagle, a 65 foot head boat in 1967, the first powered catamaran licensed by the Coast Guard to carry passengers. 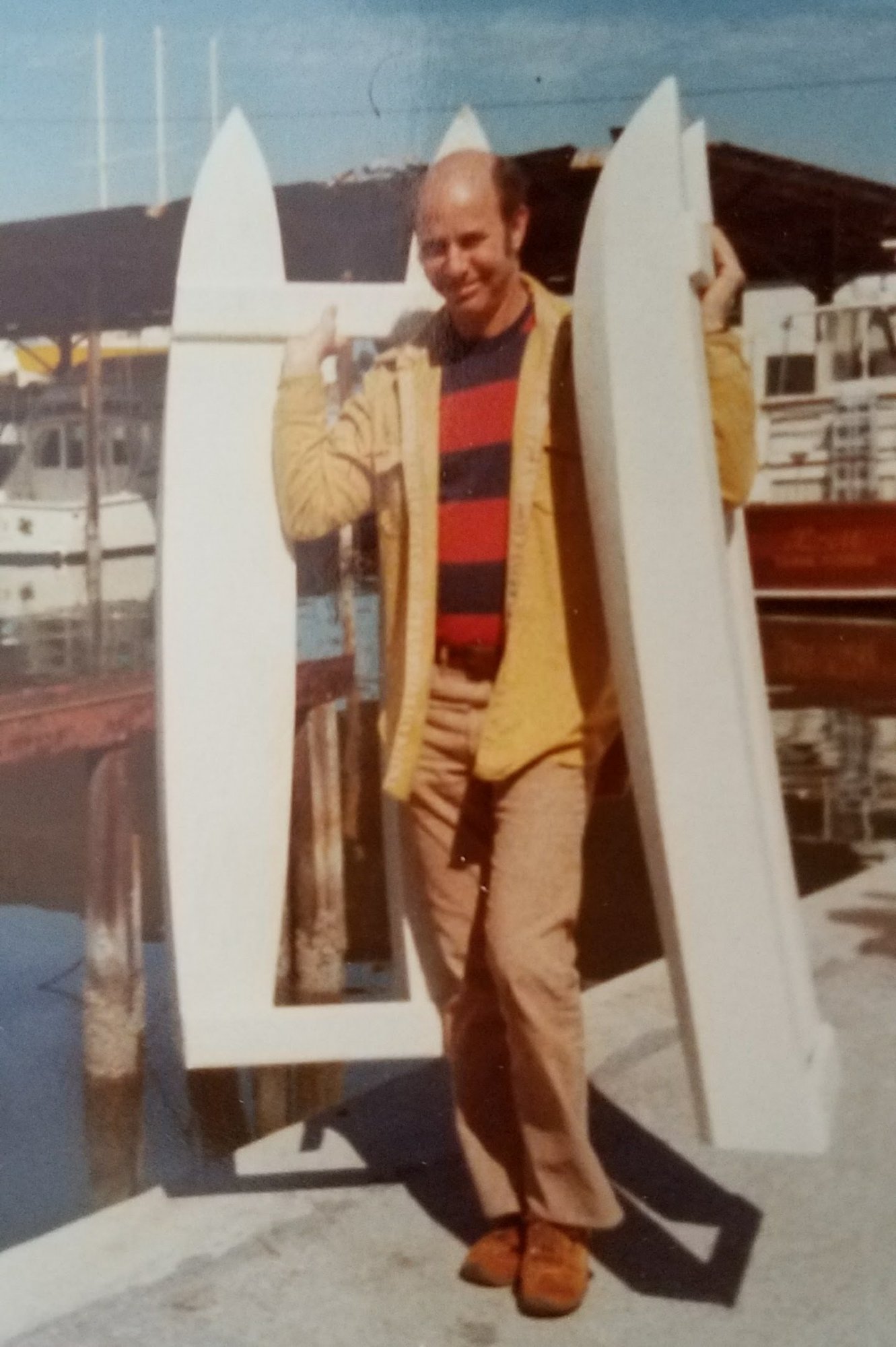 It changed the face of party fishing across the country. The number 2 came two years later and both boats were built by Clark. 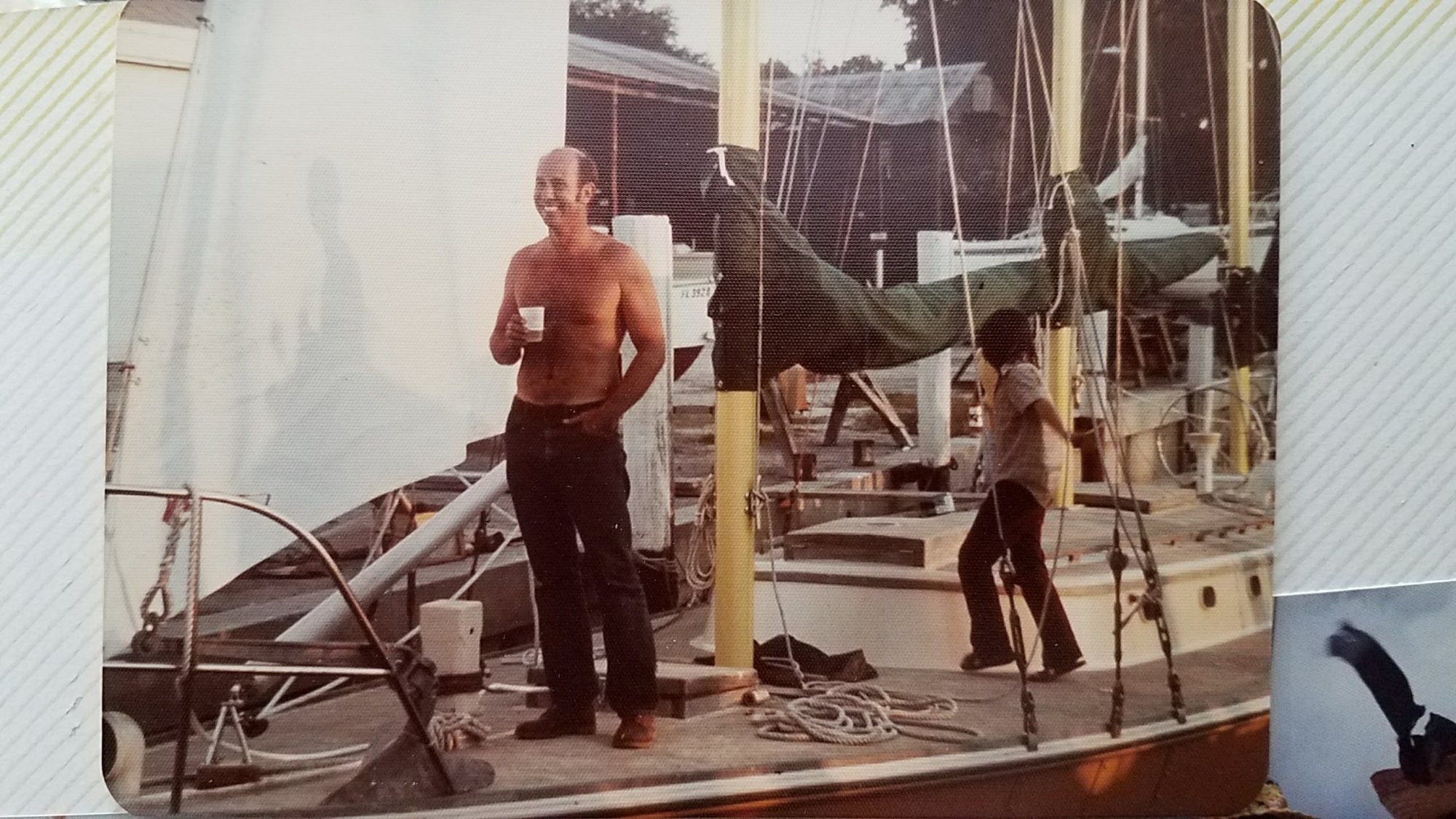 where we lived for 3-½ years in Clearwater Marina. His plan was to sail the World, but his grandfather died at 95 and his grandmother lived another two years before passing at 96 (somewhere around that age, anyhow). So we stayed put until then.

Our last year aboard, we sailed to Maine and spent the Summer on Hurricane Island while the Old Man answered an ad in National Fisherman for Outward Bound licensed captain instructors. 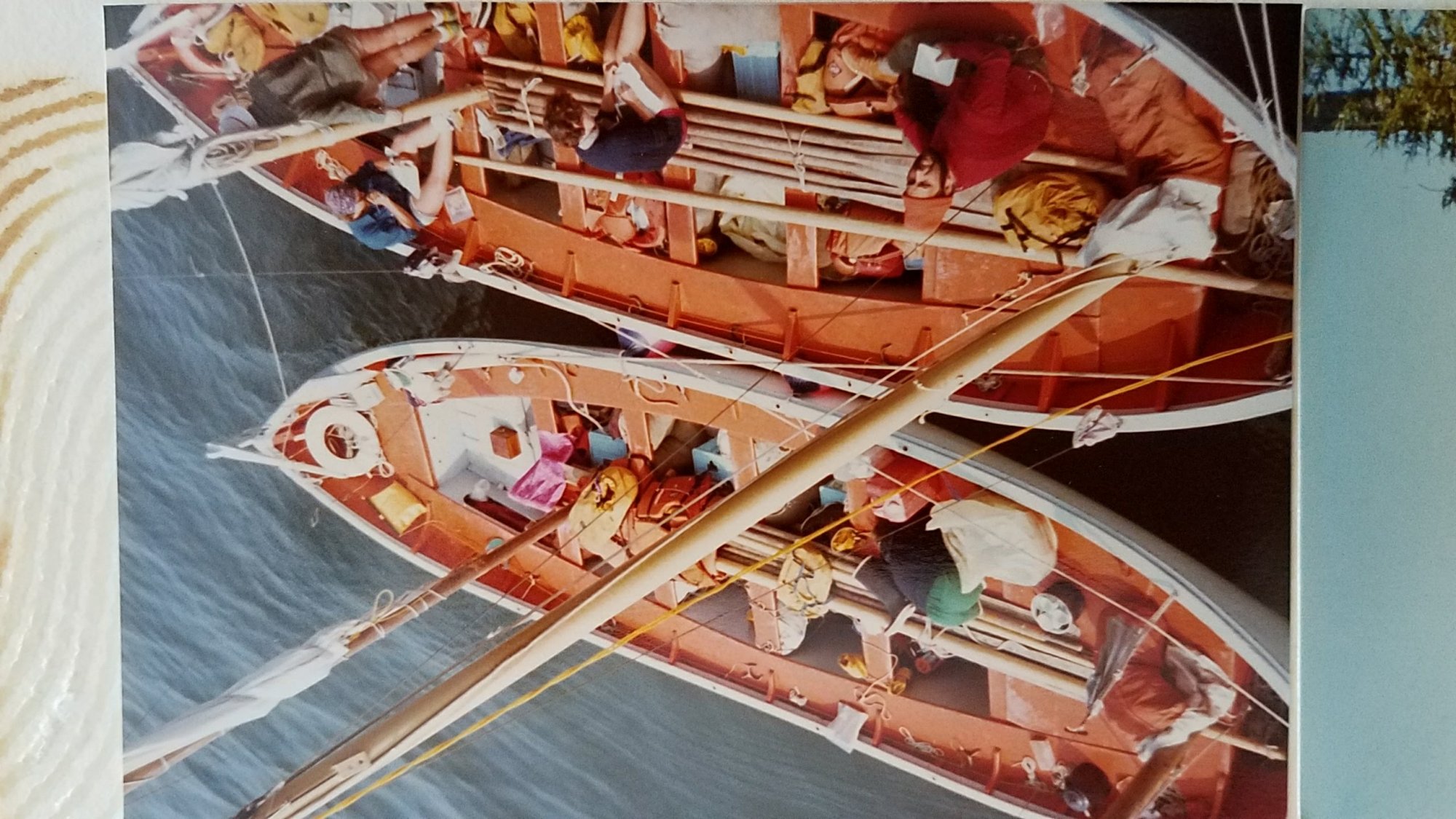 This was sort of a shakedown cruise for the family before setting off across the Globe.

Sailing South again, he kept seeing this odd houseboat named Selene. We never saw anyone aboard, but it was an interesting looking boat. We didn't see her again once we turned into the Okeechobee Waterway. 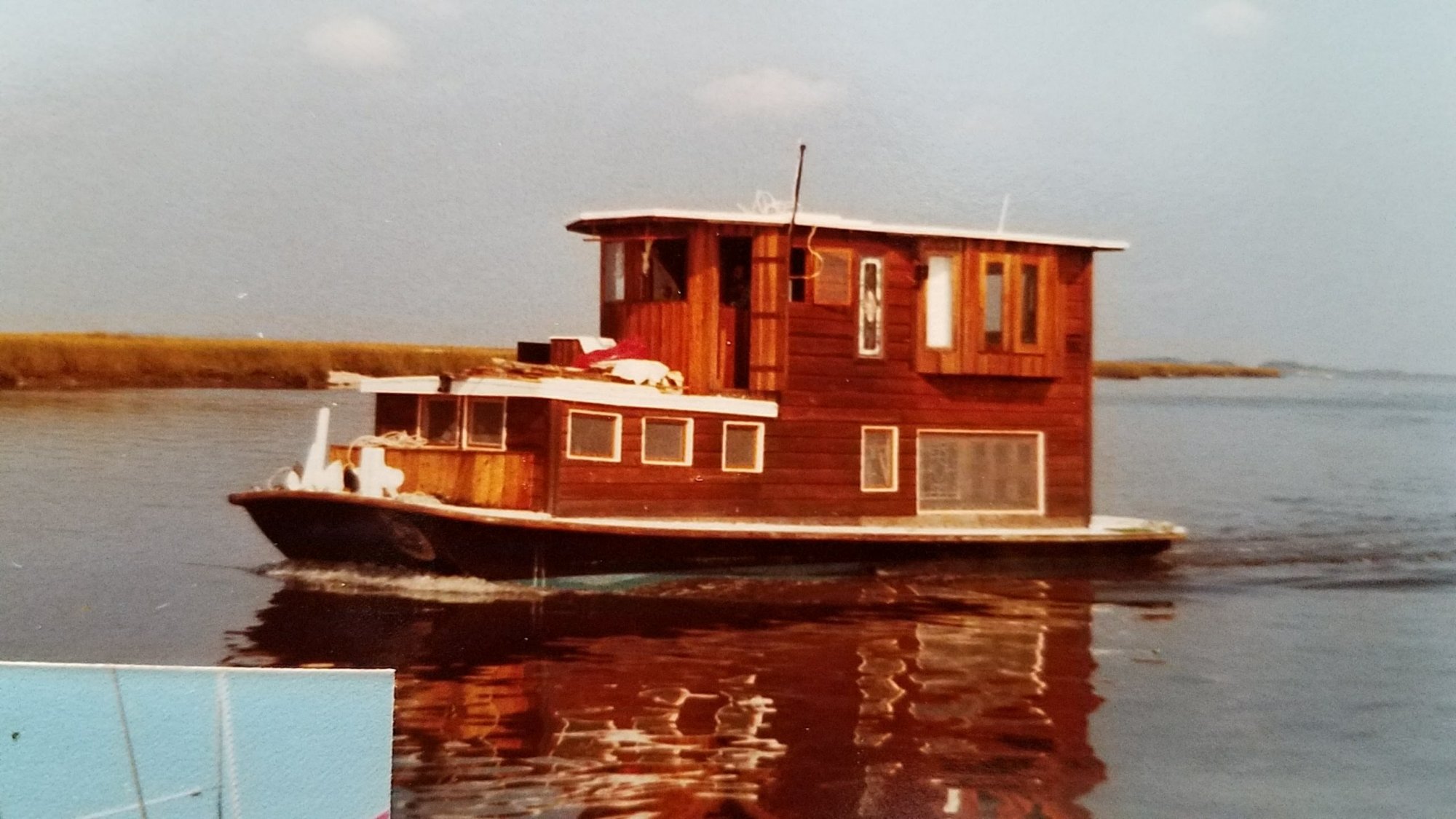 At home, his mother died shortly after our return and that morning, out in the bay, where her house overlooked the water from the bluffs, where no boats ever anchor, was the Selene, anchored. She was gone the next day.

Selene is the Greek goddess of the full moon and the new moon.

My father always imagined Selene was there to guide my grandmother to the other side. It is a full moon tonight.

We sold Sunflower and moved to New Hampshire where my father took up rock and ice climbing, hiking and road biking. He bought a new boat with the intent of sailing the World again. My new wife and I crossed the Atlantic with my mother and him after my wife graduated with a degree in nursing and I a diploma in furniture making and design.

He sailed in a number of single handed and double handed races across the Atlantic and made the qualifying requirements to enter the BOC. He dropped out a week in because he couldn't stand the idea of being gone when he had a new granddaughter just born. Turned around mid-Atlantic.

He went through a number of boats until he finally did circle the globe just before his knees gave out and he retired from sailing after several great years sailing the Caribbean and coasts of Florida and Maine.

Among the boats he owned, there was a last Clark Mills built custom Com-Pac 16 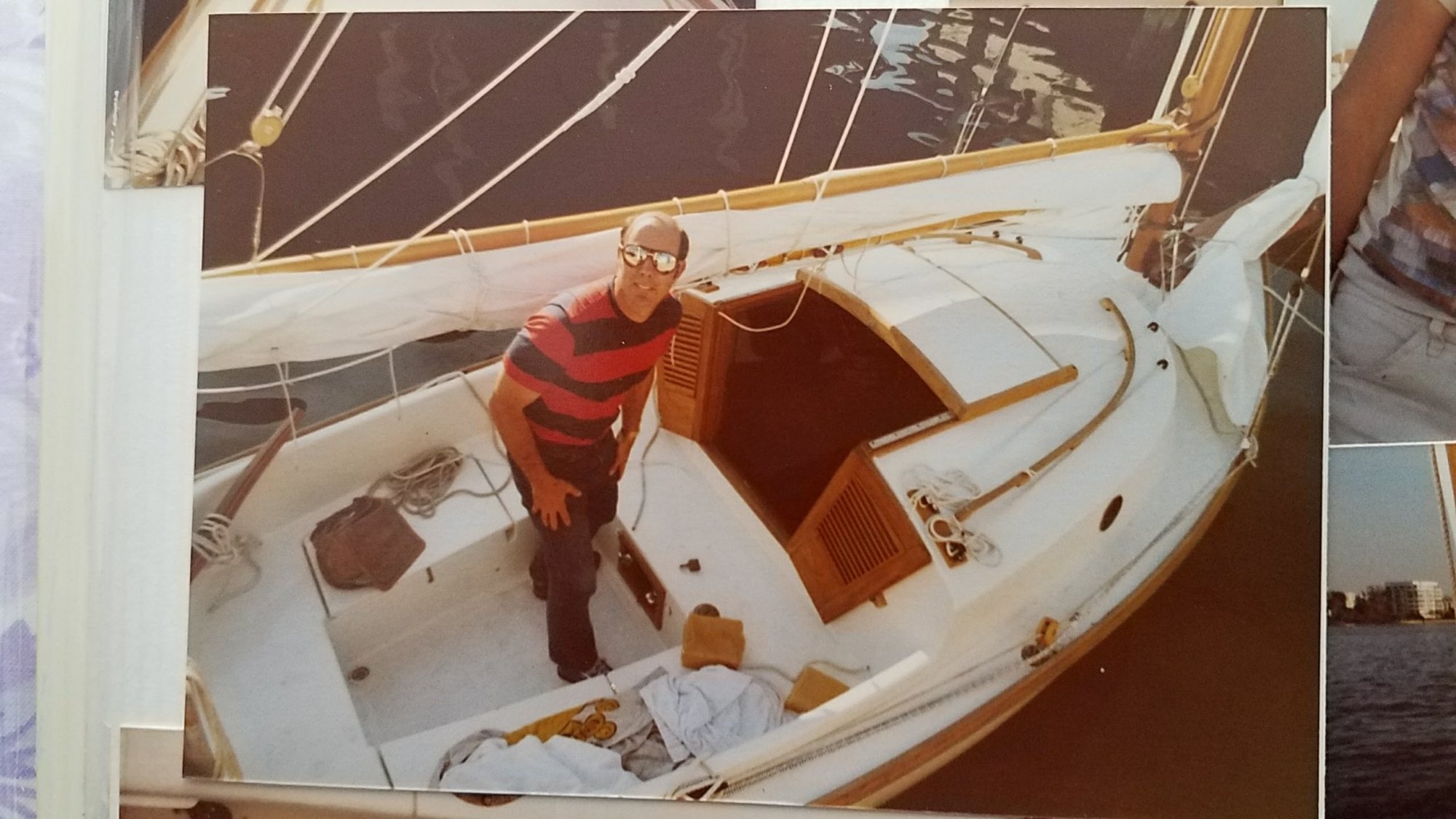 which he sailed from Clearwater to Bar Harbor.

He owned and sailed a Freedom 44, a Shannon 50, an Amel Super Maribu, a Morgan 50, several J boats from a J28, and ending with a J44. Four of his boats were named 'Zafu', having a lifelong interest in Eastern philosophy, and a couple of those are still sailing today.

My younger brother had been taking care of our father for months and I spent the last couple of weeks trying to relieve him. We were both present at 7:45am Sept 21 when he finally died. Jim was in the room, I was making coffee in the kitchen.

All of us are grateful for the tremendous gift of his wisdom and presence in our lives and we will forever feel his absence while also feeling his influence on who we are.

I know none of you knew him, that is very sad for you, but some of you know me. My greatest hope is to be just like him. In that, I feel I am somewhat successful, so those who do know me, have met at least a piece of him.

Thank you for your kindness in indulging me with this post. He would have liked all of you, as I do.

Hunter 450 Bainbridge Island
Thanks for sharing this, Will, it's a wonderful tribute. Your father was clearly a remarkable man.
Likes: jssailem and Will Gilmore

O'Day 19 Littleton, NH
Thank you Phil, I feel certain you would have been two of a kind, had you ever met. You share a very generous spirit with him.

Oday 31 Redondo Beach
I am so sorry for your loss Will. He sounds like he was a great guy. From the tone of your post I can imagine some of his his greatest pleasures were raising a family that included the likes of you and your brother and enjoying time with the rest of his family.

Hang in there. I 'm sure it sounds trite but the pain of your loss will temper with time and you will be left with all the warmest memories.
Thanks for sharing some of those.
Likes: Will Gilmore
D

Sabre 362 113 Fair Haven, NY
Will, sorry for your loss. You have many fond memories of him, that is a treasure.
Likes: Will Gilmore

Canel 25 foot Shiogama, japan
Thank you, Will.
I feel privileged to have been told his and your story.

J-Boat J/88 Cobourg
Your tribute is warm and wonderful, thanks for sharing and please accept my condolences.
Likes: Will Gilmore

TBD Looking for my next boat CT
Thanks for sharing this story with us, Will. Sorry for your loss. It’s good to keep the memories alive, so he lives on in other ways.
Likes: Will Gilmore

Catalina 27 Mission Bay, San Diego
A beautiful testament to your dad. Thanks for sharing it with us. Losing your parents is confusing. We think we are prepared for their passing, yet we find we're not ready when it actually happens. Allow the grieving process to get you through this tough time and use your gift of writing to honor your father's memory and glorify the special bond you and your brother had with him. God bless your father, Will.
Likes: Phil Herring, RussC and Will Gilmore

Beneteau 323 Manistee, MI
Thank you for sharing… Sorry for your loss
Likes: Will Gilmore
S

West Marine Kayak Tampa Bay
Will, I am so sorry. I'll be sending you a PM, and I will let my Dad know later this morning. I'm glad that the two of them got to talk after a 70+ year hiatus.
Likes: Will Gilmore

Hunter 36_1980 Bass River, NJ
Will, I am sorry for your loss of your dad, he lived a full life and inspired you greatly ! I know you will miss him but the memories and lessons of life he gave you will not be forgot. My Dad passed away in 1993, he taught me to sail, build boats and my Carpentry Hands and much more. I miss him even this day. I try to get a sail in on his birthday each year in his honor of what he taught. Take care to you and your family.
Likes: Will Gilmore

I don't have any words.

You are in my thoughts today.

Cape Dory, Albin 300ms Motorsailer, Vega Baltimore
A touching tribute Will. My condolences on your loss.
Likes: Will Gilmore

CAL 35 Cruiser moored EVERETT WA
Will,
I feel pain in the mourning that envelops you and your family. At the same time I feel the joy you share in recounting the life experiences of your father. Thank you for giving of these.

May you and the family tear asunder the shrouds of grief and rejoice in the lasting memories of the rich lifetime your father shared with you all.

May God bless you, watch over you and shelter you.
Likes: Phil Herring, Will Gilmore and SFS

Joe23455 said:
I try to get a sail in on his birthday each year in his honor of what he taught.
Click to expand

I love that idea.

Thank you everyone for your words and honest feelings.

Beneteau 343 Slidell, LA
Very touching story Will, so sorry for your loss.
Likes: Will Gilmore

Hunter 41 DS Port Huron
We are not measured by what we have when the time comes for our departing, but rather what we leave and it sounds like your father left a loving a caring family of which is worth more than all the riches in this world. I am truly sorry for your loss Will GIlmore and may the good Lord bless your family with the strength to carry on your fathers love.
Likes: Will Gilmore

Beneteau First 235 Lake Minnetonka, MN
Sorry to hear about your father. A very eloquent tribute.
Likes: capta and Will Gilmore

Pearson 37 Lusby MD
Sorry for your loss.
Likes: Will Gilmore
You must log in or register to reply here.
Share:
Email Link
Top Bottom