Catalina 310 Middle River
I am contemplating getting a spinnaker to join local racing group. Beyond the sail I also need to purchase a pole. I am looking at several used ones at Bacon Sails in Annapolis and they have numerous lengths available. Was wondering if there was a standard length that members have used? Additionally, my options on the spinnaker are a triradial vs standard, any thoughts on what would be easier for a new spinnaker user to utilize?

C&C 110 Bay Shore, Long Island, NY
Most PHRF rules state that the length of your spinnaker pole should be equal to the "J" dimension of your boat without penalty.

Ted said:
Most PHRF rules state that the length of your spinnaker pole should be equal to the "J" dimension of your boat without penalty.
Click to expand

Ted - thanks - in looking online I see the J dimension ending at the front of the boat. Does this length include the of the anchor roller?

Hunter Legend 37 Harrison Twp, MI
J dimension is from front of the mast to the intersection of the head stay and the deck, not the very front of the boat.

Your question regarding which type of spinnaker is easier for a new spinnaker user to utilize is unclear. Most spinnakers currently being designed are triradial.This has little to do with how easy they are to use but more about how the fabric panels are aligned with the anticipated loads.

Your question regarding which type of spinnaker is easier for a new spinnaker user to utilize is unclear. Most spinnakers currently being designed are triradial.This has little to do with how easy they are to use but more about how the fabric panels are aligned with the anticipated loads.
Click to expand

The spinnaker, much like the pole that I’m looking at is a used one from their inventory. One of them is an older product that is not based on the triradial design. Any thoughts on differences between the two would be appreciated.

Catalina 310 Scott Creek, VA
You would want to pull them out of the bag and see how broad the shoulders are. Avid racers of displacement boats carry several chutes and use a flatter cut for close reaching legs, and a more rounded cut for dead downwind or broad reaches. The 310 reaches relative well with a 155% jib. If you are just learning or will have only one chute an all purpose cut with wider shoulders would be my choice. It can change a marginal lighter wind day into a day sailing vice motoring. As mentioned earlier, the change to triradial is more about load transfer in the fabric. You might be better off getting a likely newer sail if you choose the tri radial
Likes: AwwShucks

Catalina 27 Mission Bay, San Diego
The spinnaker pole length should be the same as the "J" dimension as Marmalade stated. Also it should NOT be adjustable in length. Whisker poles often have an adjustable length feature..... but ... the loads on a spinnaker pole are much greater, enough to cause catastrophic failure to a multi-part, adjustable device.

I'm not sure why you think the design of the spinnaker would affect the pole length or the sail's ease of handling.
I think maybe you're confusing a traditional, racing or "symmetrical" spinnaker... which requires a pole to hold the windward clew out beyond the headstay.... with an "asymmetrical" or "cruising" spinnaker which has a defined tack and clew, and does not require a pole. The Asym's tack remains attached to rigging at the bow, a pole can be used, but it is more common to use some kind of fixed or retractable sprit with an adjustable "tack" line. 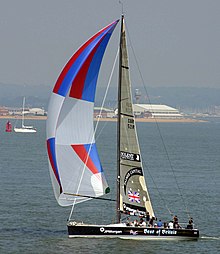 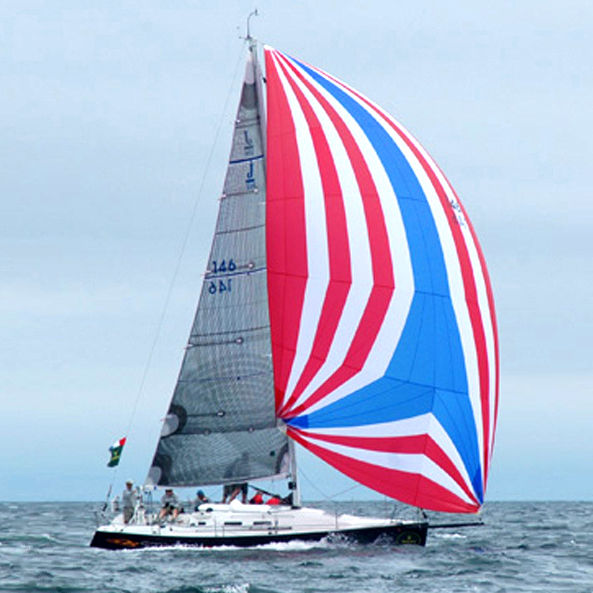 Catalina 310 #307 Bluewater Bay, FL
I use a symmetrical tacked to the anchor bail. Depending on wind, I can carry it from 70 apparent to 145 apparent. After that I go wing and wing, polling it out with my 18 ft whisker pole.