So Many Projects, Where to Start?

Yamaha 33 Port Ludlow, WA
Check out stingysailor.com. He has a barn and all the tools (jealous) and a number of well documented projects for the C22. He enjoys figuring out low cost alternatives to the Catalina Direct bling.
R

Catalina 22 Kingston
Thanks for all the tips and links.
I think I have an ever growing list of projects that are prioritized correctly (I hope) to work on.

Catalina 22 #2552 2252 Kennewick, WA
Affectionately known as "the list" : in order to stay sane I wrote it down and largely have walked it to ground in order. Money and time moved the buckets around a bit-- but it's somewhat representative of what every C22 needs (or at least needs an assessment of)

Catalina 22 9874 Newberg, OR / Olympia, WA
OK. I'll bite. I took a quick skim through my maintenance log, and split the list into 3 (somewhat arbitrary) categories - Safety, Highly Recommended, and Nice-to-have. Here are each of those lists, in the order I did them (note that this is close to 8 years of off-and-on work). Many of these items are detailed in my thread. I'm too lazy to go create separate links for all of them here.

== Safety ==
--Flares - I recommend an LED handheld for compliance, since you don't have to replace that every 18 months. You can carry pyrotechnic flares as well (they reportedly remain reliable long after the expiration; we carry a 12-gauge launcher and some handhelds, but I don't buy new ones every year)
--Trailer brake lights
--Fire extinguisher(s) and/or fire blanket
--CO and fuel-vapor detectors
--Gasoline tank tie-downs in cockpit
--Rechargeable spotlight (mainly intended for night usage, as you'd expect. Also used in fog - move the light around and / or shine it on the mast and sails to make your position clear. In case of fog, one kid gets the foghorn and the other the spotlight
--Jacklines
--Radar reflector
--Bilge pumps
--VHF (with AIS receiver; nice where we sail, but not essential)
--Stem reinforcement (kit from CD)
--Reinforced transom and rebedded motor mount
--Trailer tires (Load raging E)
--Transom scuppers
--Lifesling
--Keel winch, cable, turning ball, etc. (this would have been higher on the list if the cable hadn't been replaced soon before we bought her)
--Cockpit drain (flanged adapter + ball valve)
--Replaced chainplates (new design from CD)
--Replaced standing rigging (CD kit)
--Replaced trailer brakes
--Quick-release on swim ladder (for emergency access in the water)
--Through-bolted starboard bulkhead (marginally a safety item - mostly it's just to relieve the squeaking as it flexes against the liner)

== Nice-to-have ==
--Bimini
--Windex
--Electrical refit w/solar and battery monitor
--USB and 12v power outlets
--Bulkhead compass (this one could go in safety, depending on the sailing you intend to do)
--Inflatable PFDs
--Ball-lock pins on table attachments, so the table is safe to lean on (and still easily removeable when converting to a bunk)
--Running backstay + tensioner
--All-line halyards (replacing line+wire)
--Cockpit tent
--Outhaul (later replaced with an internal cascade system in the boom)
--RudderCraft kick-up rudder (this was a safety item for us, as the stock rudder casting was highly corroded. But if yours is in good shape, it's a nice-to-have)
--Rope clutches
--Furling headsail
--Pump-out and vent for MSD porta-potty
--Replaced cockpit-locker latches
--Bowsprit and furling Code Zero (maybe our favorite upgrade, but I can't call it anything but a nice-to-have
--Double-ended main sheet
--New main sail
--Bimini upgrades
--Fruit hammock
--Handheld VHF (backup to main VHF and for use in dinghy and kayaks)
--Tachometer / hour meter on outboard
--Outboard charger wiring
Likes: tfox2069, pclarksurf and Gene Neill

pclarksurf said:
That's it-- if @AaronD has that much cool stuff crammed on a 22 I'm road tripping to Newberg to crew
Click to expand

With that much stuff on a 22, there's not a lot of room left for crew. You might need to bring your own 22 and buddy-boat. Speaking of which, do you have space somewhere for a few duffel bags? And maybe a teenage boy?
Likes: Grotto and pclarksurf
C

Catalina 30 TRBS MkII Milwaukee
Interestingly no one has mentioned keel hanger casing and associated hardware. As suggested, go to Catalina Direct. There are several tutorials on maintenance, lifting hardware (ie: diagrams of winch), as well as the history of the retractable keel. There is also a wealth of information from the C-22 Natl Association.
This boat has been around for many years, very popular, and be assured there is nothing that you will encounter on the C 22 that many others have been challenged and conquered.
BTW... I wondering if the keel trunk was cut open to repair a damaged keel locking pin. At any rate I would prioritize the maintaining the Keel hanger pin, and lifting equipment.
Congrats on the boat, Welcome and Good Luck

Hardhead said:
consider it a journey...
Click to expand 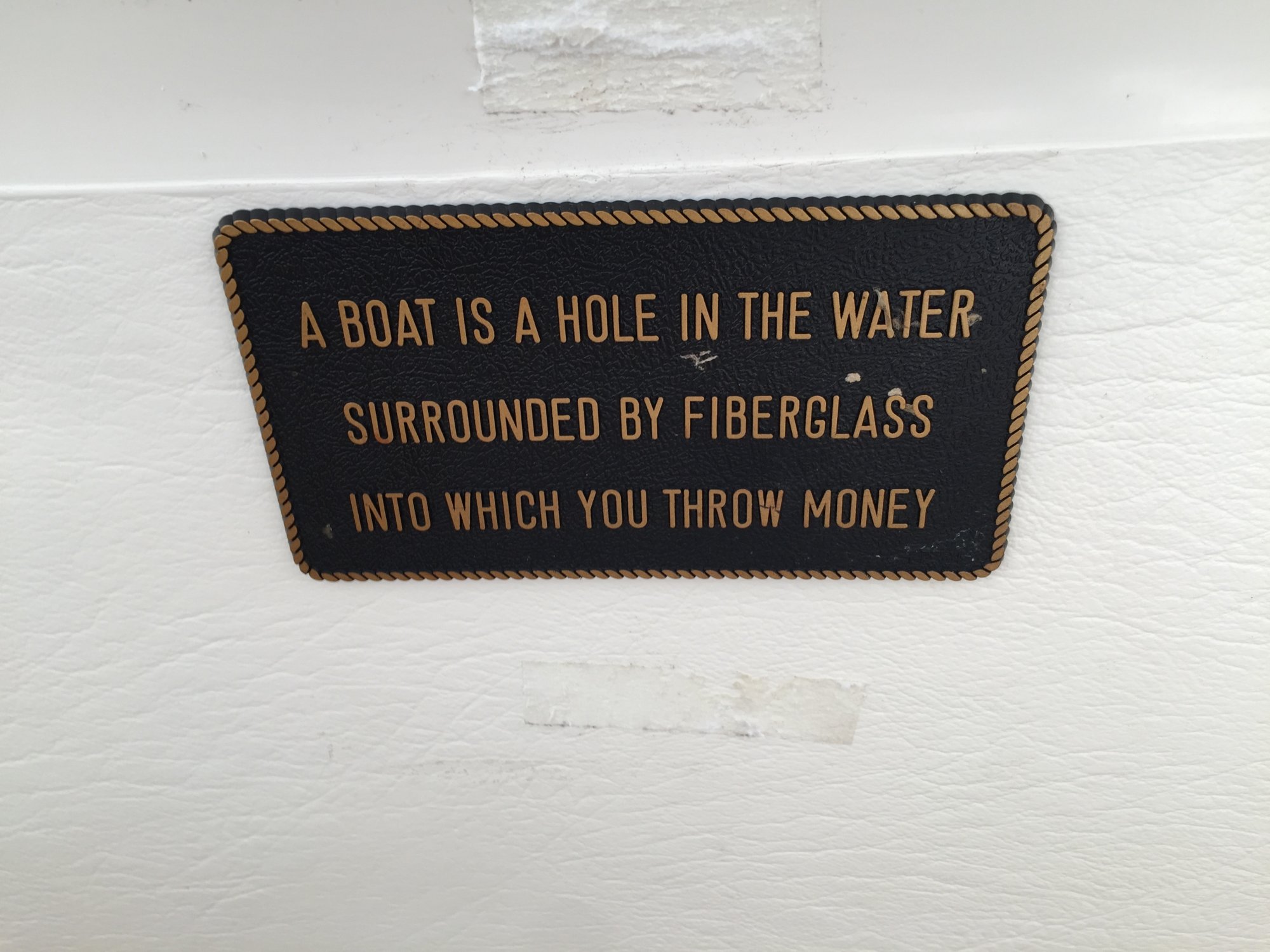 Hunter 30T Cheney, KS
Don't be this guy. Get some sailing in! 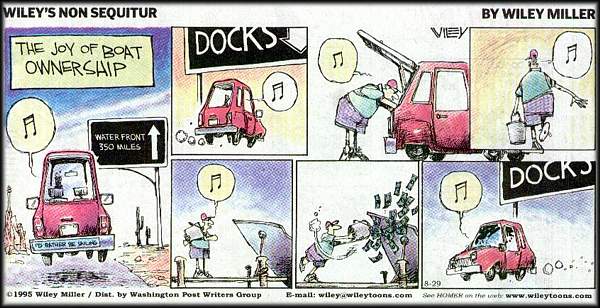 Catalina 22 Wheeler Lake
Rlongfield I'm in the same situation. As I'm working on tge interior, my plan is to take the boat to have the bottom hull inspected and painted, also to remove the keel and sandblast, place in under heaters to sweatout any condinsation, then seal with a polyester, replace ball bearing, cable and wench. On my electrical, I will use an automotive fuse block to various toggle switches, a dual bank baattery selector with dual battery charger plus solar charger. The other issue is the halyards, cattalina sell the 1/4" units but I have 5/16 and I don't want change out all the sheaves. I've already changed all lighting to LED. Also installed electric belge pump. I need to change out the front chinch hook....this will be a big issues, of which I plan on installing Kelar block instead of wood.All exterior teak wood has been acid cleaned and numeous coat of teak oil reapplied. By the way bottom hull painting quote was $27.00 per foot.
R

mll said:
the halyards, cattalina sell the 1/4" units but I have 5/16 and I don't want change out all the sheaves.
Click to expand

Any reason you are going to Catalina for the halyards? I'm not at this point yet but couldn't you get 5/16 Halyards done locally?
Was that $27.00 price per linear or per square foot?
R

Not sure how I missed this post, did the C22 come with a cooler?

rlongfield said:
Not sure how I missed this post, did the C22 come with a cooler?

The new design did, and there's a little icebox in the sliding galley, but it's essentially uninsulated, so it would be more of a meltwater box than an icebox. My take on the perfect cooler for a C-22.
You must log in or register to reply here.
Share:
Email Link
Top Bottom