hunter H240 island lake
I have been considering a potential upgrade from a 1998 H240 to a newer Seaward 25. I ended up with a larger truck so towing capacity is no longer an issue, F250 vs honda ridgeline is an amazing change in capability, couple of things about the H240 that I have not enjoyed over the past 15 years include the lack of dedicated head, OB that ends up out of the water in choppy water, excess weather helm in some conditions, fairly tender, hunting at anchor in breezy conditions. Looking at the weights and displacements I don't see the Seaward being that much different than the H240, I do like the dedicated head and diesel option associated with the Seaward 25. H240 has a very friendly mast raising system not sure about the Seaward setup. Anyone have any thought regarding the possible upgrade? I normally keep the boat in a slip and trailer it a few times a year to favored cruising locations.

Seaward 25, Catalina 350 Erie, Pa
We had a 23.5 before we got our Seaward 25. They are totally different animals other than the fact that they can both be towed. The Hunter was "exciting" the Seaward a little more boring to sail, you could say. That's in a good way in that it is way more stable and has more room for cruising than the Hunter did. We have had our Seaward out in conditions we would never have left the dock in with the Hunter (and we did sail that one in conditions we probably shouldn't have). Fit and finish and quality of materials is better on the Seaward.

Concerning weights. Don't believe the posted weights. You can figure about 6000-6500 lbs towing weight for the Seaward when you're packed up for cruising. The Hunter is, and feels like a much lighter boat.

You mentioned the inboard on the Seaward. Yes, much less likely to come out of the water. The 1gm10 diesel is a great little motor. If you are in an area with lots of current, you might want to look for one with the 2 cyl diesel, but the single cylinder is not a deal killer. We've had ours up in Maine and Rhode Island, so you just have to time the currents and be aware of your limitations when you have to motor.

The head. Yes, the marine head on the Seaward is a step up from the porta pottie that hides under v-birth on the Hunter. Don't expect miracles in that regard, though. Ours came with a 10 gal holding tank, which is just big enough to keep 2 adults stressed out over where they will find the next pumpout. I did a lot of work to ours including replacing the hoses and pump on the jabsco head. I also experienced many of the "fun" problems you can have with a marine head including, but not limited to, the geyser effect when your vent clogs, you continue pumping, then open the pumpout fitting to pump it out. We ended up replacing it with a composting head and have been happy ever since. So when looking, don't just pass one by cause it has an MSD porta pottie plumbed to a pumpout, or a composting head. It is nice to have an enclosed head.

If you do go Seaward shopping, inspect the arch area closely. These boats don't have a compression post, and some of them had arch compression issues. This is fixable, though. Anything from 1996 and newer had less issues in this regard. That said, don't expect you can get your shrouds super tight on one of these boats (you can't without damaging the boat). It doesn't matter, as they cruise fine the way they were designed. In 1996, the cabin was raised some so the newer boats have a couple more inches of headroom.

Sailing. Our Hunter sailed better than our Seaward when we first got it. There was a bit of a learning curve, I guess. In fact, we were a little disappointed. The shallow wing keel took a little getting used to when sailing up wind. What we found the fix was turned out to be the sails. Once we had a new custom set made, the boat sailed like a different boat. It would likely outsail the Hunter and definitely works much better as a small cruiser for 2 people than the Hunter ever could be. We really liked our Hunter when we had it, and it was a great boat to learn on. The Seaward is just a nice step up.

Mast raising was easier and quicker on the Hunter. Seaward used several setups over the years. Ours works fine, but I've often felt it could use some improvement. It does the job, however, and I've never been bored enough to take that project on.

That's all I've got for you. Dragged this on long enough.
Likes: LloydB and Heisenberg

Between Boats near Vancouver, BC
We're planning to upgrade from a Mac 26S, for similar reasons. I took a close look at a Seaward 25 about a year ago. I really liked the boat and might have bought it, but my wife has her heart set on a Hunter 260, because of the greater interior space. And, truth be told, I'll be quite happy with the Hunter, too, I'm sure. With the swing keel and water ballast it should launch and recover easier than the Seaward 25, which is important for us because we tow and launch every time we sail. If I could, I'd pony up for a Seaward 26RK, which sits lower on the trailer than the 25, making launch and recovery easier. But, now that I'm retired, the 26RK is a bit beyond our budget.

I haven't seen an H240 up close, but I was impressed with the quality and robustness of the Seaward 25 when compared to our Mac. It's a lot more boat. If the mast raising system on the H240 is similar to the H260 then I would say it has the edge in that department, too. Does the 25 have the same mast raising system as the 26RK? I think that system is a bit clunky, but it seems to be perfectly functional. I would expect that the mast and boom on the Seaward are somewhat heavier than on the H240.

I used to have a prejudice in favour of inboard diesel power. But, after living with the Mac for a few years, I think an outboard might be a better overall option for a trailer sailor. I do all my own maintenance, and maintenance on an outboard is dead simple, compared to an inboard diesel, and probably cheaper, too. I would say the outboard is better in every way, except that you're probably a lot less likely to aerate the prop in rough seas, with an inboard. That's an important consideration, for sure. But everything else leans in favour of the outboard, IMO. (I guess I prefer the sound of a diesel, too, but that's purely subjective.)
S

Seaward 25, Catalina 350 Erie, Pa
Maintenance will likely cost more with a diesel inboard. You also have to consider the service life of the PSS seal and cutlass bearing on an inboard. Most of the Seaward 25's out there would need the PSS replaced and likely the cutlass bearing if this stuff was original. You can find Seawards with outboards, if you wanted one. I'm partial to the inboard diesel, though.

The 26rk solves any issues with arch compression. The longer keel should help it sail better up wind than the 25. Personally, I like the interior space of the 25 better without the keel trunk in the way. Not sure of pricing now, but used 26 rk's were about double the price of a 25 when we were looking. The covid pricing bump probably is making them all pretty pricey currently, if you can even find one.

Congrats on the retirement. Did that a couple of years ago and haven't gotten bored yet.

sesmith said:
Congrats on the retirement. Did that a couple of years ago and haven't gotten bored yet.
Click to expand

Thanks, it's only been a couple of months, but no chance of boredom, yet!

I made this plot about a year ago. You can see that 25 prices and 26RK prices are essentially the same, taking age into consideration. 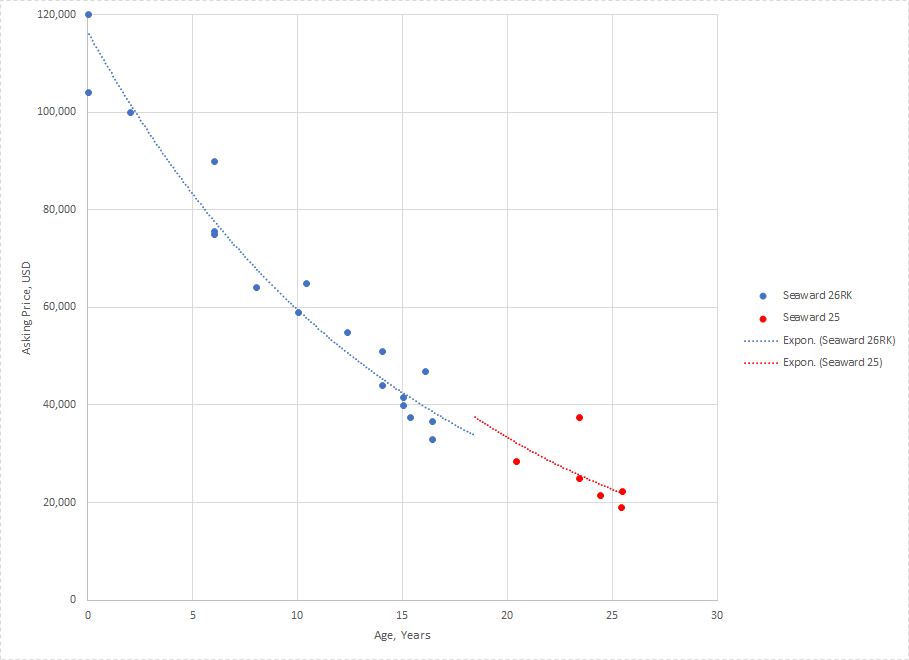 Hunter 2008 H25 Lake Wabamun
Before upgrading from my Mac 22, I eyed out the Seaward 25 and 26 but due to availability and cost, I ended up with a 2007 H25. For sailing on inland lakes and its ease of launching, mast raising and set up, I am more than happy with my H25. It has a real head with holding tank and is a good size for two people. As stated by others, in this thread, Seawards are built for bigger water but if you plan on cruising on lakes, the H25 might suit your needs just fine.
S

hunter H240 island lake
Thanks for the replies, still pondering what to do.