Hunter 340 Narragansett
On my 2000 340, this is going to be the 4th Jabsco Fresh Water Pump I have to replace. This one lasted 4 years.
1 sometimes 2 people on the boat, not a lot of use other than Galley and Head Sinks.
What do you have in your boat for a Fresh Water Pump?
I need to replace a pump (Jabsco Par-Max Plus Model No. 82400-0092). This pump looks like it just came out of the box. So I have very little faith in Jabsco.
I have 12.75 Volts at the pump connections and nothing else on the boat is having an electrical problem.
Thank you for suggestions for better models.

Hunter 340 Lake Lanier, GA
That's funny given my recent history with Shurflo fresh water pumps on my H340. The OEM lasted about 14 years, but since then I have replaced the newer ones, now on #3. Bought #1, then 2 and 3 were warranty replacements. They have been good on no questions asked warranty replacement, but I have no idea why they keep failing.

Hunter 36 Seattle, WA
Check the flow rate for your jabsco, and match that as closely as you can with a Johnson or Shurflo continuous pressure pump. We have a 2009 H36, and while we are on the OEM Jabsco, it's losing pressure at shorter and shorter intervals. I bought a Johnson to replace it.

Hunter 340 Wickford, RI
I have a 2000 340 also. We bought it new and have replaced 3 Jabsco Fresh Water Pumps. Same model number as yours.
I replaced the 3rd one in 2015 and it is now starting a small leak at the diaphragm. Ed‘s pump lasting 14 years is remarkable.
I don’t think these pumps can give us more than 5 years tops and that‘s sad considering the low number of hours they actually run. Like yours.
I‘m going to look at the Shurflo and try that this time.

Hunter 340 Narragansett
Thank you for all your help.
I also looked into rebuilding the pump, this time, but the cost is "almost" equal to a new pump. And mine seems to be electrical, rather than mechanical, I think. And was always the case with the others I had to replace.
From this posting and others I have spoken with, Shurflo seems to be the more reliable model.
I did notice that the Shurflo Models require a separate fuse be installed in the line, where the Jabsco doesn't.
I like that idea.
Thanks again for the guidance.

Tartan 3800 Westport, MA
I don't think all Jabsco pumps are the same, meaning, they are not all of the same lineage. I think what probably happens is what happens a lot in the recreational marine industry, and that's that companies acquire other companies' product lines and re-brand them, and so on.

I have a Jabsco potable water pump, but it bears no resemblance to yours. Mine's a Par pressure pump 36800-1000, that I've rebuilt once, and I believe is original to my boat, making it 24 years old. Parts aren't cheap, a rebuild kit is $120, but it's built like a tank. I am not even sure it needed to be rebuilt, as I was trouble-shooting another water system issue, and just wanted to eliminate the pump part of the equation. A new one is about $450. It's a diaphragm pump that is belt driven, and has integral check valves and pressure switch. 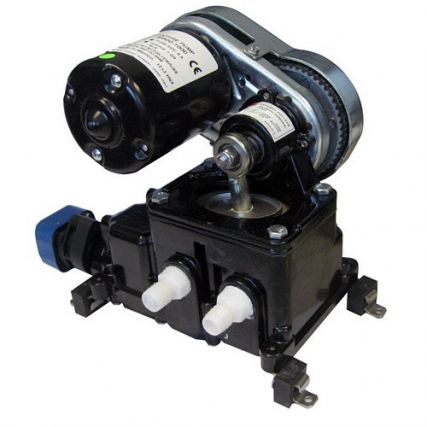 Yours costs about what the rebuild kit for mine does. So, not a super-expensive pump. I might want to spend more money up front and not have to replace it so often.
N

Hunter 340 Narragansett
I replaced my Jabsco with a Shurflo Aqua King. Much quieter than the Jabsco.
What I didn't like about it was the moulded connections for the input and outgoing water connections. The Jabsco has numerous double O ring types and angle fittings that you insert and lock into place on the pump. It makes it much easier to install or (in my case) remove the pump.
Since I have new 15 mm Whale fittings and piping from the outgoing side of the pump and the original 2000 style pipe from the Tank to the pump it made it hard to screw the pump to the old piping.
It's tight, no leaks and much quieter.
Has anyone change the piping from the Fresh Water Tank to the Pump? I'm thinking that will be my winter project.
I would like to go with the 15 mm Piping and Whale Push fittings that I have after the pump AND install a hose just befor the pump to make winterizing easier.
With a long hose just before the pump I could simply put it into the Pink Antifreeze and pump it through the entire system.
I could isolate the Water Heater also from the line and just drain that and add a small amount of antifreeze to it for the water at the bottom of the tank.
I think it will work if I can get the new piping from the Fresh Water Tank.
Any thoughts?

Hunter 340 Wickford, RI
There is a posting on this site that talks about just what your asking. Right now I can‘t remember who or where on the site but a Forum search may open it up. I’ll look for it also, as I would like to do that too.

You have the right idea with putting a supply line in front of the pump and after the inline filter. It would make it easy to pump antifreeze into the system.

As far as adding a new line from the Tank, I’m not sure as to how a new 15mm line would attach to the old size line or the fitting at the tank. Or if it can be done without major changes to the Tank itself.
I’m sure others will have input into this type of upgrade.

Hunter 40.5 East Greenwich, RI
I also replaced my Jabsco with a Shurflo Aqua King. It is a 4 chamber pump vs the Jabsco 3 chamber and it is much quieter. I have had it installed for a couple years, so I can't speak to longevity.

Tartan 3800 Westport, MA
Question for the guys with failing pumps, do you have accumulators in those water systems?

Hunter 340 Wickford, RI
I don’t have an accumulator on my 340. Straight run from Tank to Filter to Pump to Faucets. I have ordered a Shurflo Aqua II myself. The small leak is driving me nuts.

jviss said:
Question for the guys with failing pumps, do you have accumulators in those water systems?
Click to expand

Never had an accumulator in my water system.

Hunter 340 Lake Lanier, GA
Yes, I have an accumulator. A Chinese knockoff of the shurflo for 1/2 the price after the Shurflo one leaked air pressure. The pump was frequently cycling on/off without it at low water flow.
D

Hunter 410 full time cruiser
My current Jabsco is almost 4 years old and has been operating just fine all that time on a full time cruiser/liveaboard boat. I even still have the old one as a spare as it was still working, but the valves were back leaking some.

BTW - I have an accumulator. I could see a pump having an early death otherwise.

Don Lucas said:
BTW - I have an accumulator. I could see a pump having an early death otherwise.
Click to expand

That's what I was thinking, and why I asked.

Check valve easy to replace and now have a spare pump if needed. The new pump will likely outlast me, but if not will replace with same or use the spare. Never had a need for an accumulator.

Hunter 340 Wickford, RI
Taking on jviss's lead....I went to US Plastics and asked for recommendations for a 1/2 inch to 15 mm connector that will alow me to connect to the original 1/2 OD Fresh Water Tubing. They responded almost immediately and suggested......15mm x 1/2 " JohnGuest Acetal Union Connector.
It looks like the way to go, for my boat, to get to an easier way to winterizing, as well as quickly servicing the pump if needed.
Now if they only make this fitting as a 1/2" x 15mm x 15mm Tee, that would be great! I think I may be asking to much, but it would make this a great fit, without the need for a extra fitting to add the winterizing tube.
Thanks jviss for the help.

Hunter 40.5 East Greenwich, RI
I don't know exactly what the diameter of the tubing I have in my 1997 h40.5, but I think I just went to my local Home Depot and bought some tubing fittings. Maybe they were "Sharkbite"? In any event I put a tee in the line between the water strainer and the pump. I made a plug from a short piece of tubing and that is inserted all of the time except when winterizing. Adding this fitting makes winterizing a snap.
For winterizing I made an adapter that connected to some of the same tubing and will connect to either my 5# CO2 tank or my air compressor. This allows me to pressurize the system and blow all of the water out of the lines and faucets. I also blow backward into the empty tanks and into the empty hot water tank. I usually use the CO2 tank because it is easy to transport, but my small air compressor can connect also.
I don't put any "pink stuff" into the water system. I just pump all of the tanks empty, drain the HW heater, and then blow out all of the lines.

Hunter 340 Wickford, RI
Rich,
You have the Tee setup I am looking to place on my waterline. The challenge I‘m having is the strainer is connected directly to the pump using a female to female fitting. Like yours, I am trying to get that distance between the strainer and pump. I have to start on the other side of the strainer and that‘s 1/2 inch OD pipe to gain some room.
I don’t think there is enough play in the pipe to move it back towards the Water Tank to give me the extra room after the strainer. And being original piping with collets eliminates the option of cutting the pipe before the strainer.
So I have to go from 1/2 inch to 15mm to get to a fitting that will attach to the strainer itself.
I believe this is what Nichole is facing also as she describes in her post before this one.
The Whale fittings are fairly big and that doesn’t leave a lot of room for a length of tubing big enough to get a good grip in the fitting.
Once I can get the play in the line I’ll be adding what you have, either to blow out the lines or inserting a hose into the antifreeze and pumping it through.
You must log in or register to reply here.
Share:
Facebook Twitter Email Link
Top Bottom