Hunter 430 Waveland, MS
Our 9KW Kohler Generator was submerged for about 10 minutes when the boat was put back in the water.
This is the biggest Cost of any damaged item.

After talking with the Kohler Disturber/Repair, about 30 miles away, he said that our Remediating Action of fresh water washing it could make it recoverable, about 90% chance.

So when we installed the New Start Battery, we knew at least one cylinder was full of water.
We decided we needed to "Pickle" the 16 HP Yanmar engine.

We tried to start it, since I have a spare water pump.

Yes, cylinder #2 injector had some rust starting and we could see Water in that cylinder.

So, Johnny, my Son-in-Law, asked for a towel to cover the injectors holes.

He then bypassed the starter circuit. LOL, using the Screwdriver method ---Starter to ground!!!

The engine turned over and blew the towel off, soaking Johnny with water.

Of course I was hidden from that water.

I made Johnny use a new Towel, like a bib. We then used PB Blaster in all cylinders and did it again until we could see good oil covering the cylinders. PB blaster again, more turns.

We Pickled the Genset engine!!!

All parts were loosely put back to get some new Oil and do it again soon.
Jim...
Likes: Daddio862, kappykaplan, jssailem and 1 other person

JamesG161 said:
He [Dan the PIC Adjuster] brought a special extension ladder that was amazing, and I did not get a picture of it.
Very easy to board the boat.
Click to expand

Well Dan returned for a 2nd Adjustment to the boat and I asked him about that ladder.
I wanted that ladder, since the boat will be on the Hard for months. 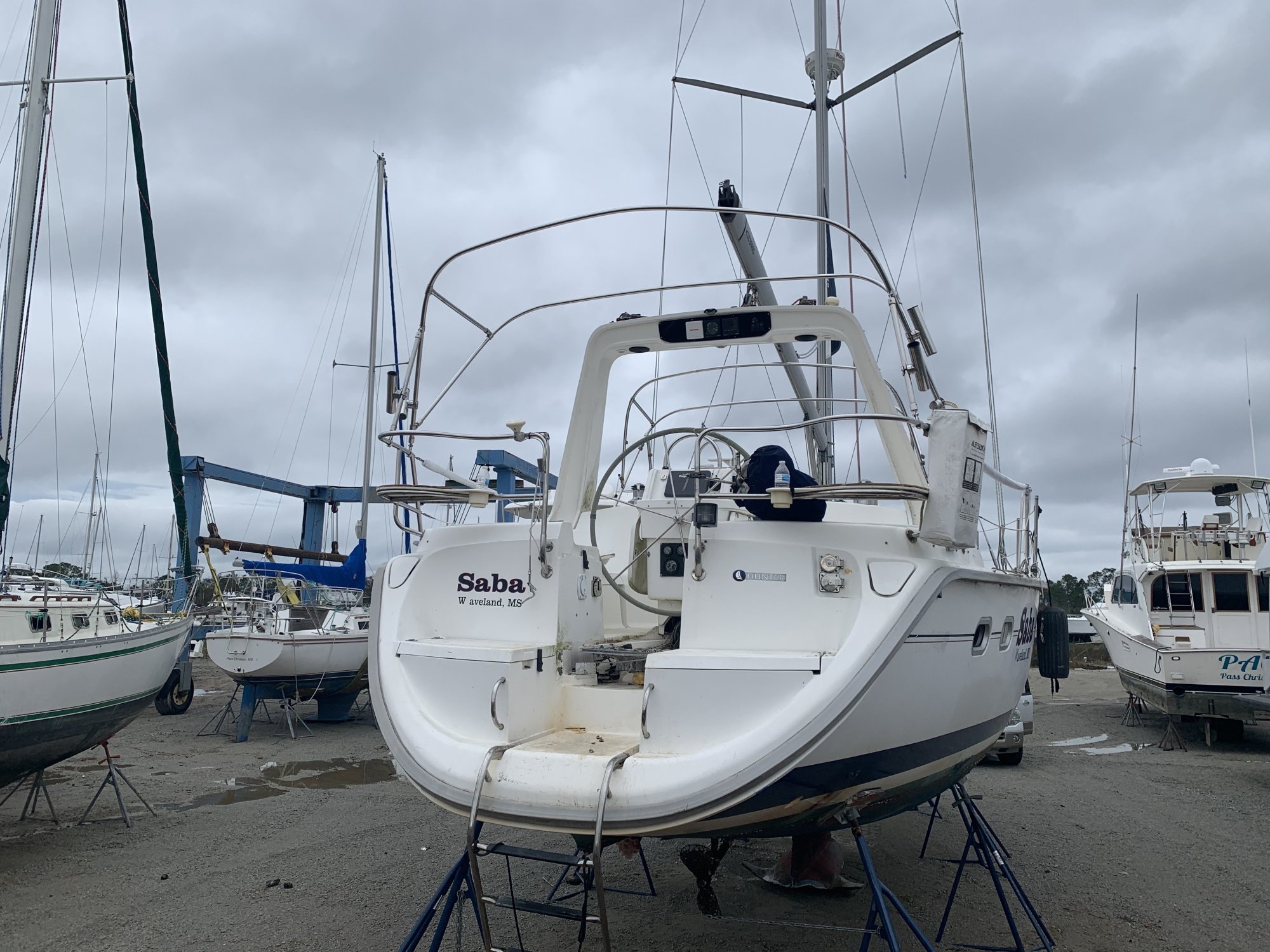 This is the ladder maker.
Telesteps Ladders

This safest portable telescoping ladder, I have ever seen.
1) Anodize Aluminum
2) Can be Electrically Isolated from a Ground
3) Weighs 18.5 lbs. with adjustable heights up to 14 feet [my model]
4) OSHA standard
5) Safety indicators on each step to assure locked.
6) Fits in a bag to carry to job. 21.5 inches in the bag.

My first test in my Kitchen.

Note 2nd step has a Green indicator to prove safe steps and the Red pinch levers, that releases all the segments at once.

I will put mine to good use!

They even have the Military Grade, black tactical ladder too.
Jim...
Likes: jon hansen and jssailem

[To make the new Rudder, we will ship our Old Rudder [Picture in post #18], Freight Collect, to them.]

That Rudder "Stub" has been crated and awaiting these Shipping Instructions.
______
The first surprise...

They need the 2 Old Rudder Bearings and shaft which is still attached to the Steering Quadrant.

They are planning to use them on the new rudder. Oh My Gosh!!

A big Wrinkle as been added to the restoration, since we have to remove all the parts and ship them too!

Hunter 430 Waveland, MS
Getting the RUDDER restored has been an adventure so far.

It has taken 48 days to this point.

Shipping it soon to Foss-Foam Products of Florida [Bob Walker contact].
When Bob saw that picture he remarked...

"Oh my. That’s quite a crate. You could hide in there for free trip to Florida. It might get a little cold on the way though."


You do not want to know the cost of this shipment and box, PIC is paying for it.

Pearson 37 Lusby MD
Wow! It should arrive safely in that crate.

kappykaplan said:
Wow! It should arrive safely in that crate.
Click to expand

The only parts needed are the precision Stainless Steel [SS] sleeves shown on the Shaft.

The other stuff are just role models.

It will be interesting to see how they use the SS Sleeves on the new straight SS Rudder shaft.

The UHMW precision matching Sleeves to the SS Sleeves are Glued in the Rudder tube on the boat.

The RUDDER reinstallation will be another adventure in about a 45 days. 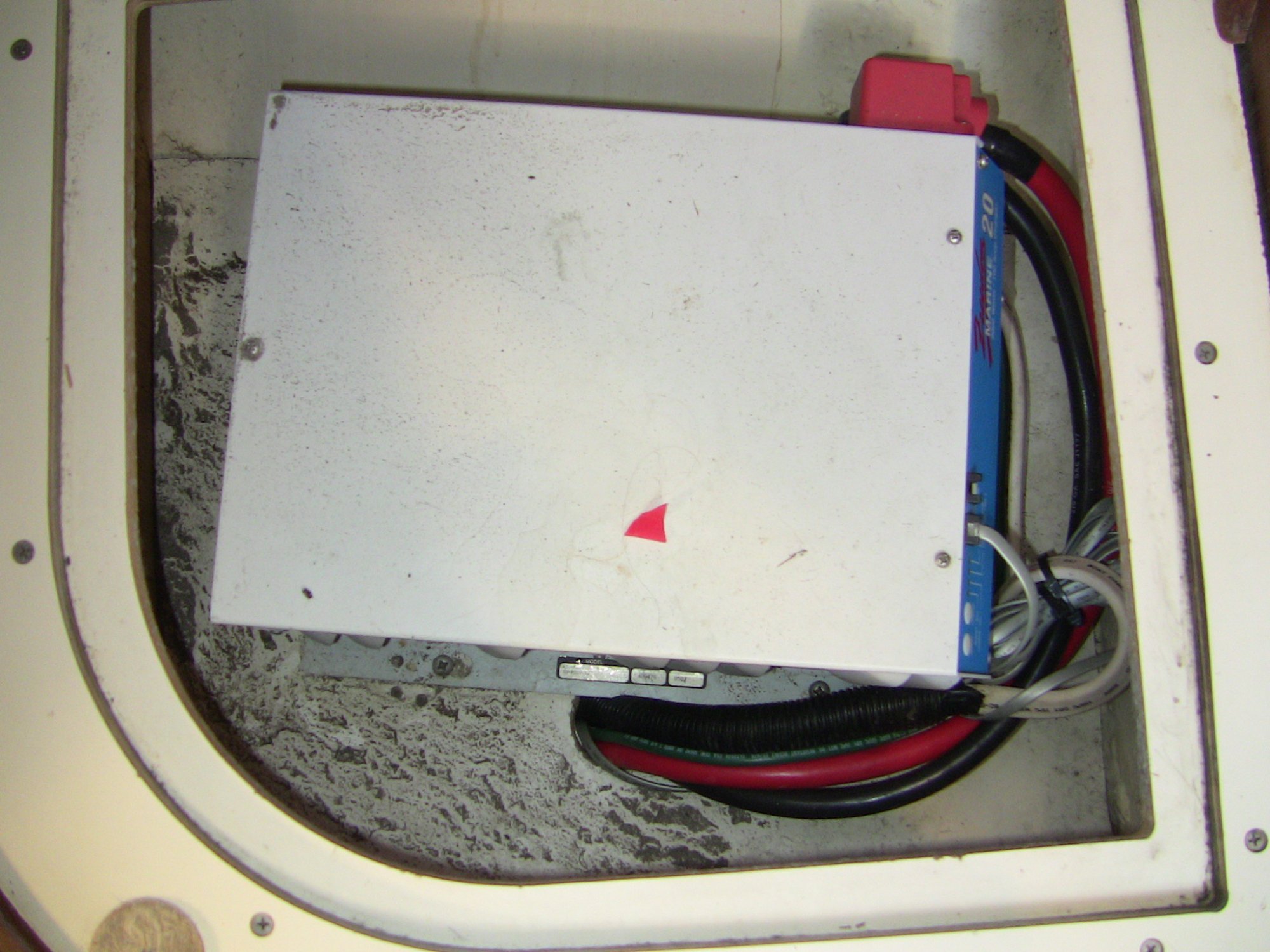 We have replaced the unit already and cleaned the power connections, which were already clean.
Megaohm the wires and Anti-Oxidant put on the terminal.

The newest Xantrex replacement is Freedom SW 2012, which has a new Xanbus control panel [on backorder] { It will charge Lithium Phosphate batts}

It did not fit exactly in the same place.

The Big 100 amp Cables [Red&Black] were too short and the inner hull, in the picture, was curved by the old plugs.
We had to clip the corner edge of the hold down bracket to make it fit nicely.

We did check all of the rear cabin 120 VAC outlet to assure they worked. [Not exposed to water]
So they are fine and being used now without need for exterior extension cords.
_____
I wanted to use our shore power connection for 120 VAC so I bought this. 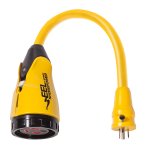 We did check one DC circuit, as a test, and it was good.

All DC circuits are OFF aboard now. We have 2 breakers to shut off.

Pretty weather which got action today
Boy what a pain to remove the cabin separation panels.
We are going to cut directly over the doorway and then trim out later.
Pictures soon!
Jim...
Likes: jssailem

Hunter 430 Waveland, MS
This is what you do to get a OEM Generator off a boat. 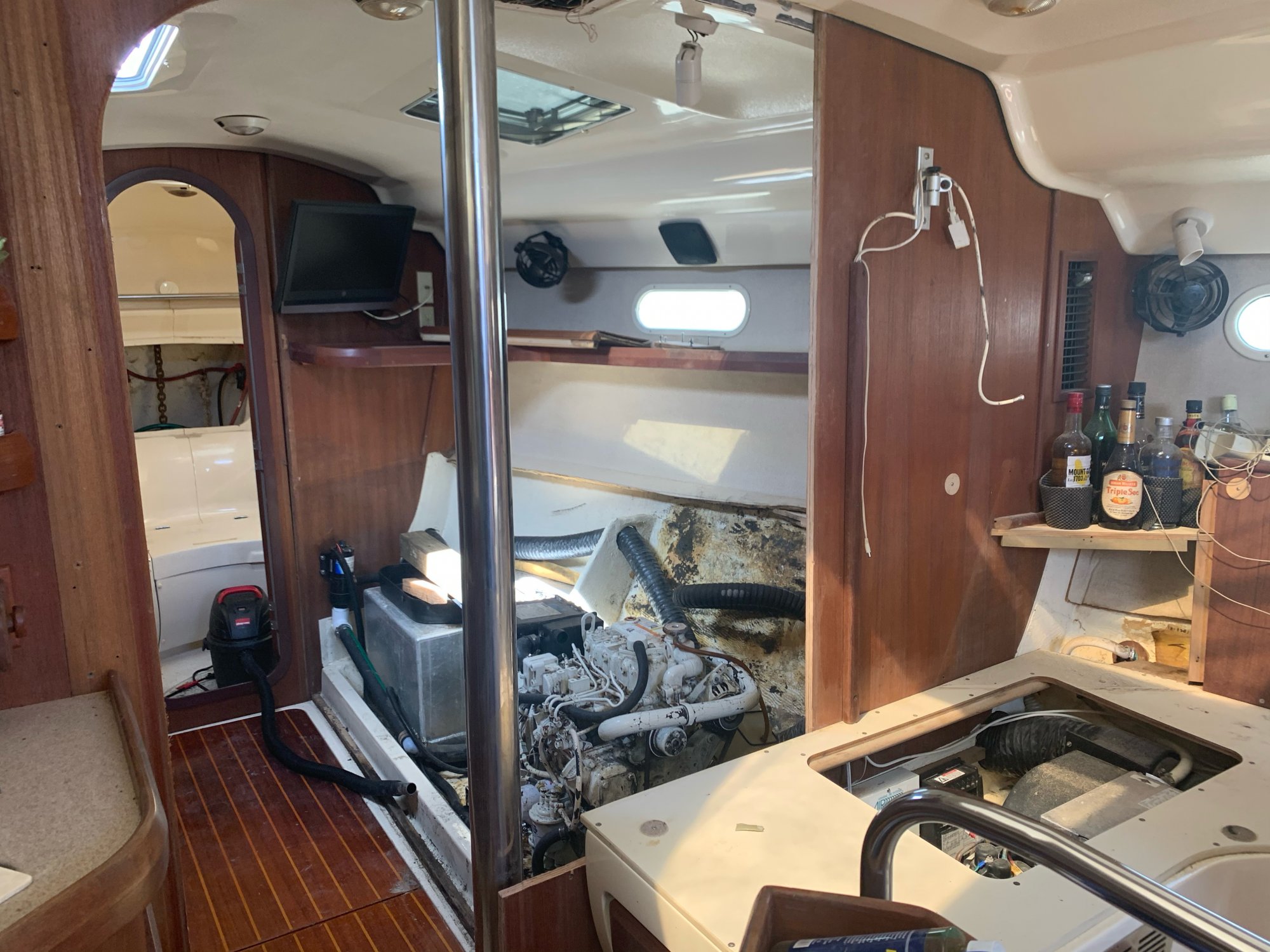 Please note I left the BOOZE on the boat.
Guess why?
Jim...
Likes: shemandr

Please note I left the BOOZE on the boat.
Guess why?
Jim...
Click to expand

No guess necessary. I would call that excavation a semi evisceration. My sympathies for the ordeal you are experiencing.
I always left booze on the boat until some local kids had a party onboard. Then no more.

Beneteau 343 Slidell, LA
Jim,
You definitely going to need the booze to get thru this.
Has anything been done to repair damage to topside yet?
Is insurance adjuster still on scene, monitoring restoration?
I feel your pain. Patience is key word here, just like aftermath of Katrina.
Hang in there buddy.
Likes: shemandr
D

Belliure 41 Now on the Chesapeake
How far do you have to go at this point to get this lovely boat back up and sailing? Sorry if this is a really bad question at this point...

JamesG161 said:
The Rudder next step...
Click to expand

New Rudder is here on the yard now and stored under the boat. 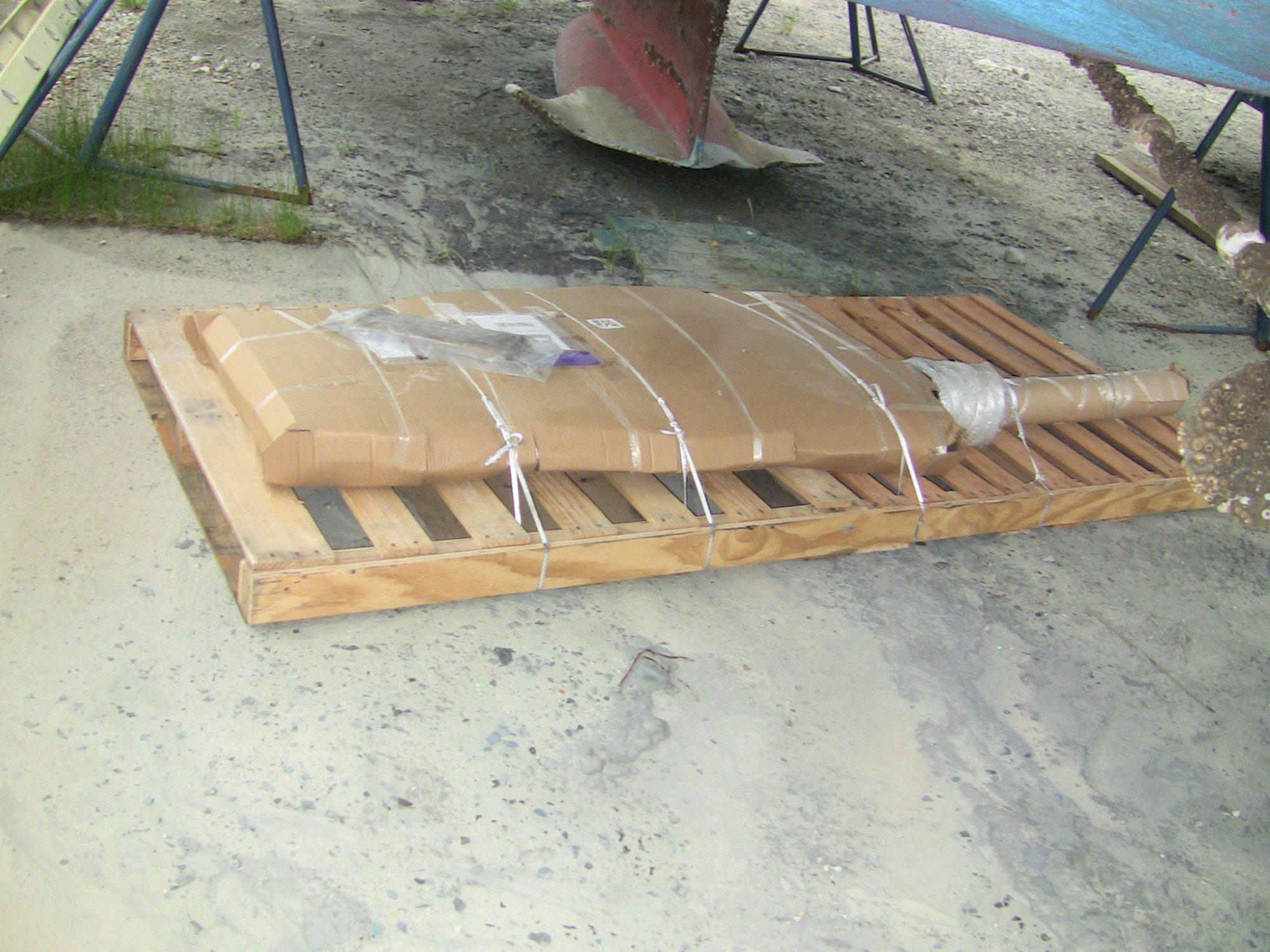 Good shot of my slightly bent Keel fin, too. Plus my 2 shaft Zinc.
New Propeller on order too, from SBO shops. They matched the Propeller to my Volvo Penta 50 HP transmission!

dLj said:
How far do you have to go at this point to get this lovely boat back up and sailing?
Click to expand

That is a frequently asked question.
It is a slow process, since there are many damaged boats in the yard now. "Squeaky Wheel" syndrome.

Weather is now favoring the outside Hull Fiberglass damage repair.

We are about 80% done on the inside Electrical checkout. 120VAC done and we can use inside outlets now.
In fact, we are going to the boat today to continue on the 12 VDC systems.

CAL 35 Cruiser moored EVERETT WA
That bend looks like the winglets that adorn the ends of jet planes now. I wonder how they work on a sail boat?

jssailem said:
I wonder how they work on a sail boat?
Click to expand

Not too much variation expected in performance, even if still slightly rippled after Heat straightening. Port side should be easy to bend back.

Not too worried about drag on a 13 ton boat moving at max hull speed of ≈8 knots.
Jim...
Likes: jssailem
R

jssailem said:
That bend looks like the winglets that adorn the ends of jet planes now. I wonder how they work on a sail boat?
Click to expand

CAL 35 Cruiser moored EVERETT WA
They may reduce vortices. You might gain speed... 8.1knts...
You must log in or register to reply here.
Share:
Email Link
Top Bottom