Hunter 356 Mackinaw City, MI
Our 2002 356 came with an in-boom reefing system. Right from the beginning it was near impossible to use. The lines go thru various holes in the boom brackets and make so many turns causing incredible resistance. For us the solution for 9 seasons was not to reef. Finally we would like to change that. I’m sure I’m not the only 356 sailor with this situation. We are not interested in using the existing configuration. If any 356 owner has solved this problem we would really appreciate your solution. Jim n’ Kathy on SamiDog on Lake Michigan

Hunter 356 Mackinaw City, MI
Ok thanks but I hd already used the manual and still found the incredible high resistance due to the several changes Of direction and lack of wheels or pulleys. So what would help is a totally separate means to reef a 356 without using the existing configuration. Any suggestions at another owners success with this would be really appreciated.. jim

Hunter 46 Point Richmond, CA
Fully understand.........might have a rigger and/or sail loft look at your system to make recommendation(s).

Bavaria 38E Alamitos Bay
You might buy and install a Selden boom that is rigged for single-line reefing. The model I have dating to 1999 while “operational” also offers a lot of frictional resistance; however, Selden booms might be better now with all the newer types of rope available. (The version I have uses 7/16” Dacron line which I can see contributes to the frictional resistance problem.) But with that said above I can’t say I’m a fan of single-line reefing from the cockpit. It’s slow, tedious and frankly, exhausting, to winch in the reef lines through the boom apparatus. Yet on a “big boat” in building wind one can get the job done, eventually, w/o having to go fwd to the mast.

To speed things up and bring on a happy face an electric winch buddy or similar might be the ticket for my single-line reefing. I’m thinking of getting one. So many things to buy!
Last edited: Jul 23, 2021

O'Day 35 Buzzards Bay
The simplest solution in my opinion is a two-line reefing system, one for the tack and one for the clew, run back to the cockpit. The line for the clew runs straight through the boom to the aft end. You can even run the clew line outside of the boom but I wouldn't. Looks something like this: 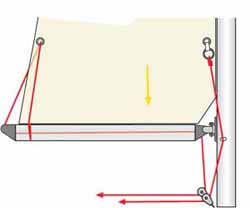 dmax said:
The simplest solution in my opinion is a two-line reefing system, one for the tack and one for the clew, run back to the cockpit. The line for the clew runs straight through the boom to the aft end. You can even run the clew line outside of the boom but I wouldn't. Looks something like this:

Pearson 31-2 Boston
Our P31-2 has a single-line reefing setup, and has similar if not the same hardware (boom, pulleys, blocks etc.). When I got the boat a PO had changed the arrangement of the forward part of the system to remove turns and simplify the whole picture, as below. 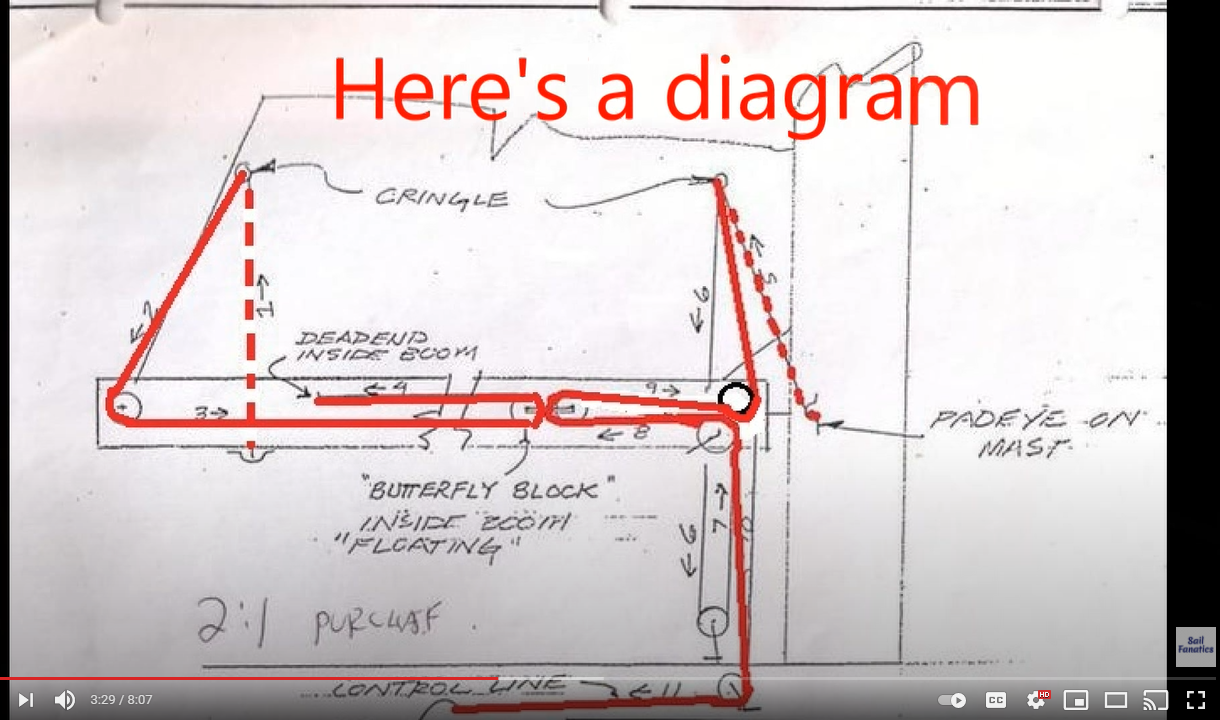 On our P31-2 this revised system has worked very well, see A well-functioning single-line reefing system is a joy to use and I would try resolving your problems with it.

PS> You need to be sure that there are no fittings installed on the boom that protrude inside the boom, as if so, the shuttle blocks will tend to jam on them, getting damaged and causing the reefing system to be unusable. The PO of our boat has installed lazy jacks, whose attachment bolts extended inside the boom, damaging the shuttle blocks and causing the system to hang up. The first winter I took the boom home, took the endcaps off, replaced the shuttle blocks and cut down all the bolts used with the lazy jack fittings and re-assembled. The system has worked faultlessly ever since.
Last edited: Jul 23, 2021
Likes: Kings Gambit and sail sfbay

Bavaria 38E Alamitos Bay
The winches on the cabin top are a bit small (winch drum diameter), so it takes a lot of cranking to bring in all of that line,
You must log in or register to reply here.
Share:
Email Link
Top Bottom