Ranger 12 Portland
great research. I'd love to have gone and picked through that yard. Here's where I got the hand drawn picture of the Ranger line-up with the notes on the origin of the Ranger 12. I think the Ranger brand has had several owners over the year in Kent Wa. https://www.rangertugs.com/blog.aspx?post=4842&title=It

Ranger 12 The Puget Sound - North
I made a compass mount. Only place I could think for it to go.

Well the first sea trial was unsuccessful due to a leak from the centerboard bolt being loose and not sealed in the trunk. Water was coming in from the starboard side at a good pace. Fixed that with some marine adhesive.

The second sea trial I launched the Ranger 12 and no leak. The wind was picking up and the tide was coming in fiercely. I managed to row out into the channel and set the mast with a rolled main. The week prior, I sewed another patch onto the leech of the mains’l and put in another grommet for a brailing line (proved worth its weight in gold later!)

The mast step I made was weak. Only had a dowel joint. It broke under stress and allowed the mast partner the slip (probably wasn’t tight enough to begin with). The wind gusted and heaved the mast to starboard and cracked the thwart. I hauled in the brailing line and made fast the mains’l before the mast split the thwart into pieces. I took the mast down and set it in the boat hastily as I was adrift towards the rocks on the jetty. Got to my oars but the mast in the way made rowing the starboard side a nuisance. Shifted things around and rowed steadily a half mile upwind, against the tide to the dock entrance. What a PITA! But a fairly successful sea trail knowing the boat sails true (no helm) and flat. I used only the jib to sail downwind on a reach and didn’t touch the tiller once.

I’ll reinforce the teak thwart underneath with two layers of 1/4” Okume cut the same as the thwart and cut the width to fit in between the side benches.

I’ll bolt the teak step into the bottom this time.

Any other ideas welcomed.

Ranger 12 Portland
Great story! Nice wood work as always. I'm going to copy your compass mount. I'm searching for a trailer now. I've dry rigged the boat and bought the missing parts, boom vang, clevis pins, etc. and should be ready for my first wet trial before May. I'll take a look a closer look at my centerboard housing and bolt after your experience. Will post photos. How long are you oars and are they sufficient or do you wish you had a different length? Howed the boat row? Cheers Bill
W

Ranger 12 The Puget Sound - North
The boat rowed really nicely. It definitely helps with the rudder in the up position (if you have a kick-up rudder) and the center board midway for pointing and drift. My oars are 8'. They stow well, light and easy to manage. I think they're fine for me but some prefer longer to reduce the angle more. The old oars feel like they had lead cores and were about 10'. I cut them to 8' and turned the handles but they still weigh a ton.

Thanks! Unfortunately, the mast step is riveted and also oblong. But that's ok.. I'll make it work..

Also, I wasn't familiar with the way the centerboard bolt worked.. the centerboard is notched so that it can pivot on the bolt up front when you raise and lower it.. Careful taking out the bolt and make sure you're holding the centerboard up in the front and resting bottom end on something below the trunk so it doesn't drop out.
Last edited: Apr 22, 2020

Ranger 12 The Puget Sound - North
So I fixed the thwart. Laminated two pieces of 1/4” Okume to the bottom. It’s really stout now and I’m pretty sure it won’t twist anymore. I bolted the mast step to the bottom with four 2” silicone bronze screws. I don’t think it’s going anywhere either. So I just need to oil the top and varnish the bottom of the thwart and she’s ready to get back in the water!

Ranger 12 Portland
Good and solid. I understand your mast step set up now too. I've been working on a 1970 Fiat Sport Coupe lately but plan to get back to the boat and hopefully on the water next week. Thanks for the photos.

Ranger 12 The Puget Sound - North
The first test of the reinforced thwart and mast step was successful this past weekend. I sailed her twice in the Puget Sound and once on the lake. The first day on the Sound was steady wind about 10 mph gusting to 15+ and the tides were strong. The second day was pretty calm (2-5 mph) and the tides were ripping through the channel making it nearly impossible to sail or row. The lake had a steady breeze around 8 mph, which allowed for some onboard adjustments. The boat sails true without any weather or lee on the tiller.

I realized that the spiral lacing works the best on this rig. It keeps the luff on the mains'l straight and flush with the mast from the throat to the tack. I adjusted the traveler here and there and will need to work on that some more to keep the sail full when sailing loose footed (I haven't used the boom that I made yet).

Sailing the Sprit-rig definitely requires a brailing line. I think I mentioned that it saved my fiberglASS once before. It's easier than dropping halyard and having the mains'l all fouled up and in the way in a gust and getting clocked in the noggin with the block. 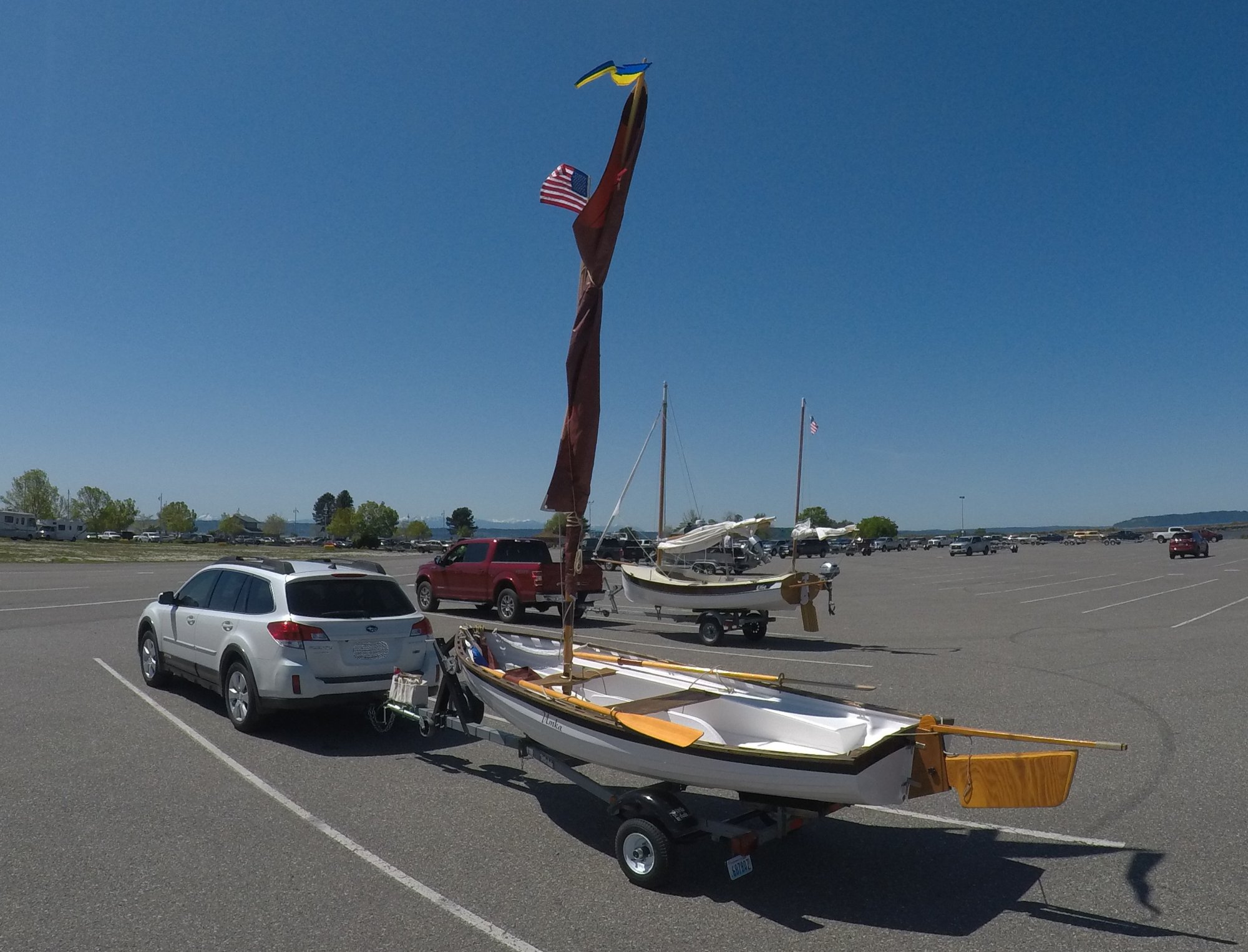 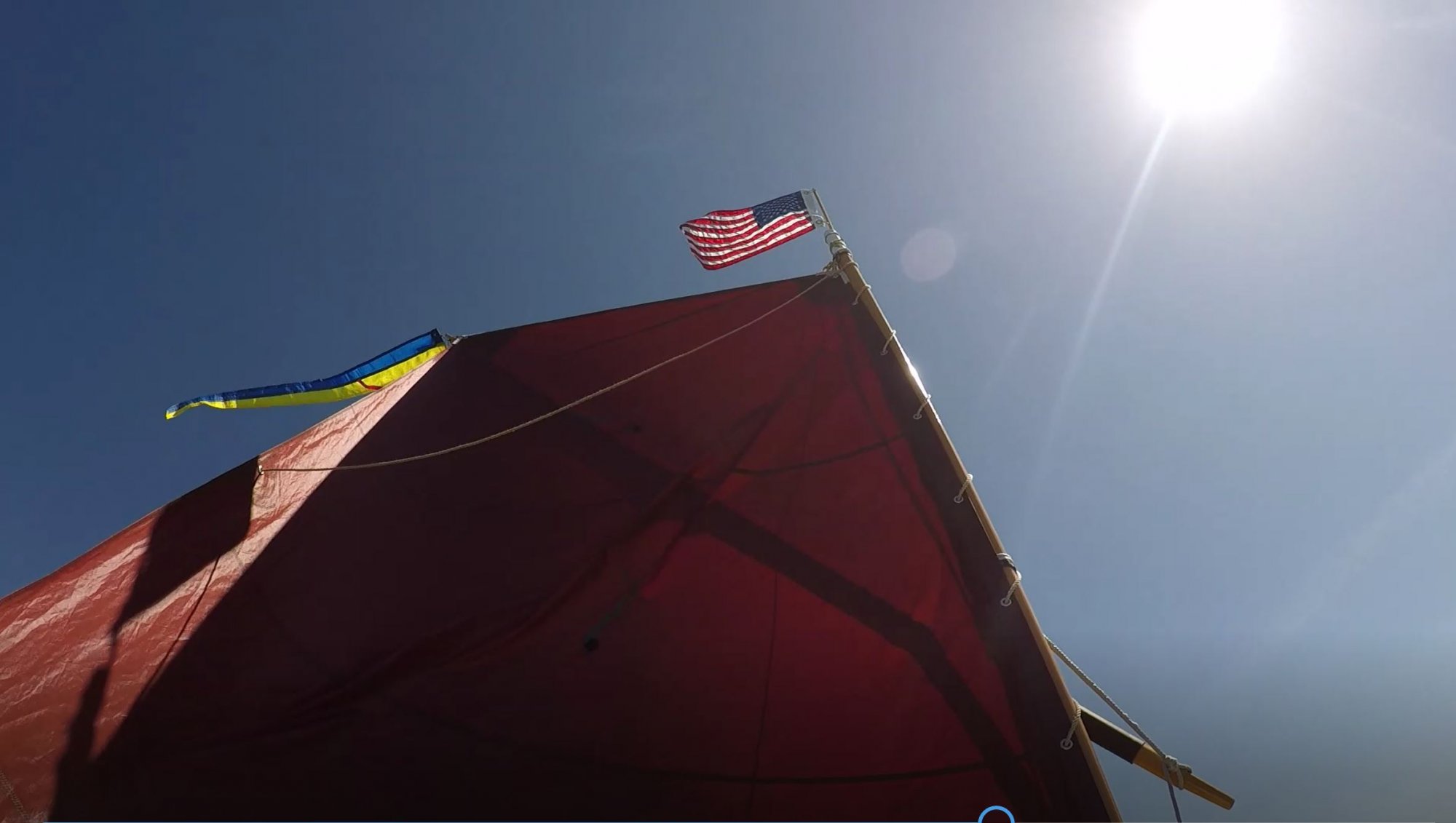 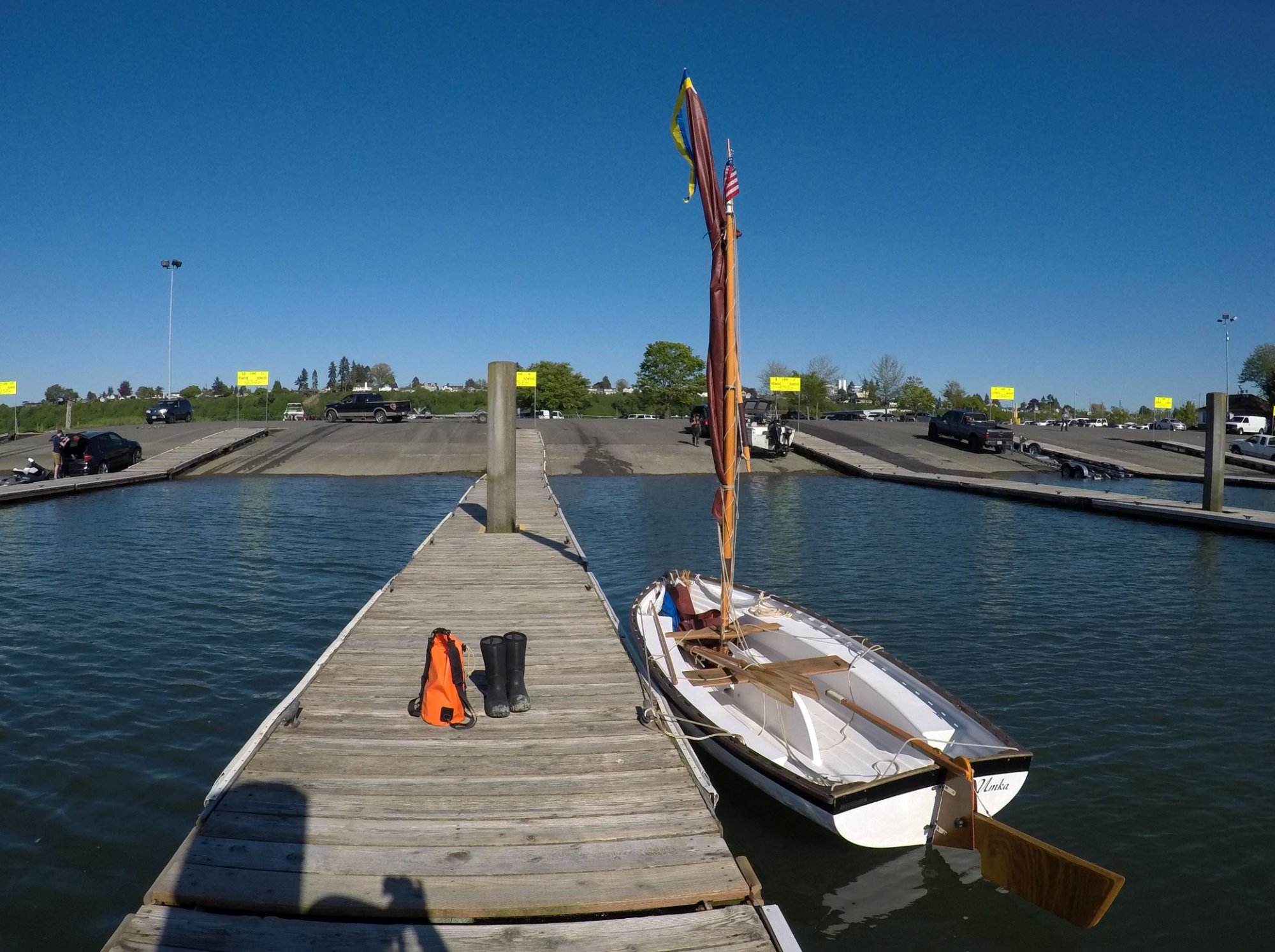 Ranger 12 Portland
The sail fills out nicely! The spiral lacing is perfect. I'm still working on other projects but will be in the water this month. My closest spot is the Willamette river which is clogged with salmon fisherman now. Will post photos when I get out.

Ranger 20 Spokane
This thread is so cool!
Questions, does anyone know how many R12s were made?
Does anyone have an video of the R12 sailing? Curious who ended up landing this package from Bellingham:
Likes: Kenan R-12
W

Ranger 12 Portland
My Ranger 12 was made in 1979 and has sail number 118 so at least that many were made. I'll try and film mine this spring and will post a video.

Ranger 12 The Puget Sound - North
So after a number of times on the water, I’ve made some adjustments and added some features to the boat which I’ll post in the thread.

First side project: I made a floating boat hook. I picked up an old bronze hook made in Norway and fashioned the handle from 2x2” white pine. Wanted to use Doug Fir but all I saw was pine that day. I used the spar gauge to divided the square into eight and eyeball the rest with the plane to make a 7 1/2’ round. The hook end was left thick and it tapers to the handle. I made an additional taper about 2-3’ from the handle end. I chiseled the point to fit the hook. Varnished it. Leathered and put a French Hitch on the handle. All pretty straight forward.

Took it out for a couple sails and and it worked great to grasp the tow hook on the bow and the docks. I didn’t drop it in the water, so had no idea if it would really float.

It scuffed up the cockpit a little, so I decided to make a cover for it. Had some extra leather... why not, right?

I went out yesterday and did a float test. Wow! It actually floated and at the right level below the wrapped handle.

The tide in Everett is strong (generally -2’ to 11’) and the docks have large steel couplings. With a good breeze, it can be disastrous for the dinghy. So more protection the better.

I decided to use the rest of the 3/8” Manila rope. The whole thing took about 13 hours of weaving, hitching, tugging and wrapping. It was pretty tiring and took a few layers of skin off my index finger despite the leather gloves and sports tape.

The bow pudding is pretty heavy, but I think it actually balances the boat better.

Next to the brailing line for the spritsail, this is a must have on the dinghy. Got the idea from the folks at the DCA. I adapted it to the Ranger 12 with some modifications.

I wanted to free up the aft area of all the extra lines, so I used some bronze snap shackles tied off the ends of travel line. The resistance and pull from the mainsheet keeps them taught underneath the teak aft quarter panels along the gunwale.
It works brilliantly and allows me to go forward and adjust the lines as needed while staying on course. I can either hold the jib and main sheets In hand or use a slip hitch on a cleat. Both provide way more freedom of movement around the cockpit and and extra hand.

Ranger 12 The Puget Sound - North
Oh Yeah. The boat hook also seconds for a nice jib extension pole. I sailed nearly one nautical mile wing-on-wing before having to tack.

Ranger 12 The Puget Sound - North
Lastly, I removed the original modern blocks for the center board and went a bit more traditional. The kiddos were fiddling with it while underway and lost the split ring and the pulley was marring the centerboard trunk.

I replaced it with a simple bronze horse shoe shaped shackle and low friction shackle with a becket. Seems sufficient to handle the 30lbs of centerboard. It certainly weighs a lot less than the previous gear.

I’ll test it on the water soon.

Ranger 12 Portland
Very nice work. I've looked at your email 3 times before responding and see something new each viewing. I'm going to copy your design on the helm impeder. very clean. The boat hook floats at a perfect height! I love reusing good old hardware. I just rehung a swedish axe head that's a beauty. I've decided to learn the french hitch to cover my handles. To be honest the day I opened your email to see all the fine work I had just come home from rigging the jib and found I put one of my jib hanks on backwards! Oh well. Carry on.
Likes: PNW Sailor

Ranger 12 The Puget Sound - North
So you're getting close to putting her in the water?! That's great.. I'm amazed at how well the Ranger 12 rows and sails. It's really pretty fast relatively speaking..
You must log in or register to reply here.
Share:
Email Link
Top Bottom