1057
Recent addition to fight the sun, not gonna help much for performance but a Hugh addition on enjoy-ability

Codybear said:
I never thought I would get excited about a latch, but that happened today. I really should say two latches. Unless you've used the cooler on a C275, it is really not possible to understand my excitement. The locking system for the cooler drawer is one of the most Mickey Mouse'd items I've seen a manufacturer do on a sailboat. Especially, an $80k sailboat. Catalina drilled a hole in one side of the cabinet and you're suppose to slide a 1/4" pin from the adjacent cabinet to lock the cooler from sliding open as you sail. If the cooler is full, it does nothing to prevent the other end from trying to torque out a bit while on starboard tack.

After three years, I had enough and looked for a solution. Found two Southco M1-63-8 latches on ebay for $58 (including shipping) and another $4 for screws: (4) 5mm x 14mm, (2) #12 x 1/2", (2) #12 x 1". Drilled (2) two inch holes in the front of the cabinet, carefully drilled holes for the keeper, clipped the tips of the #12 screws so they don't come through the side of the cabinets and added a spacer on the right side. Now I have a cooler drawer that works like you would expect a drawer to work on a sailboat. This is a mod that was well worth it and is exactly what Catalina should have done in the first place. I have a 32 nm first sail of the year in two weeks and I expect to be on starboard the whole way, so that should be a good test for the 187 lb rated latches.

I'm thinking of installing these latches as you have described. Is there enough clearance in the back so that they don't interfere with the cooler? It seems like there might be a depth issue. Thanks.

I'll be up to the boat in about a month and can take pictures of the latches and the cooler from the top.

I'll be up to the boat in about a month and can take pictures of the latches and the cooler from the top.
Click to expand

Thanks for the quick response. I will heed your advice about measuring for sure!

Catalina 275 Wilmette, IL
This is from the top side while holding open the latch. Have at least 1/2" clearance. 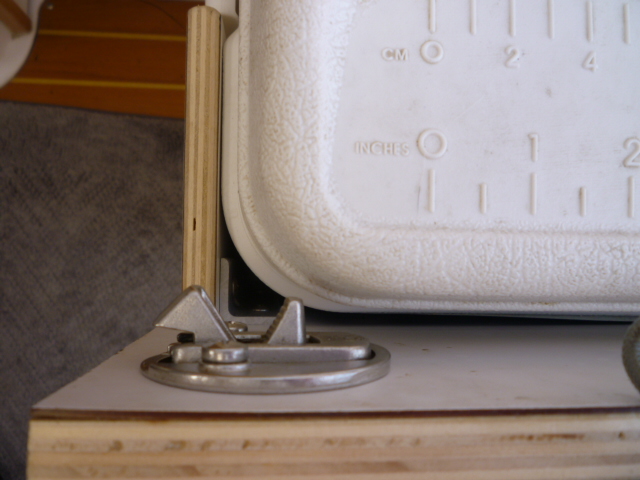 Codybear said:
This is from the top side while holding open the latch. Have at least 1/2" clearance.

Thank you. I did install the latches a few weeks ago and they work perfect. Much appreciated.
F

Catalina 275 Sport Grapevine
Here are a few mods I have made. First off I had Zarcor build a set of custom doors so I could ditch the washboards. 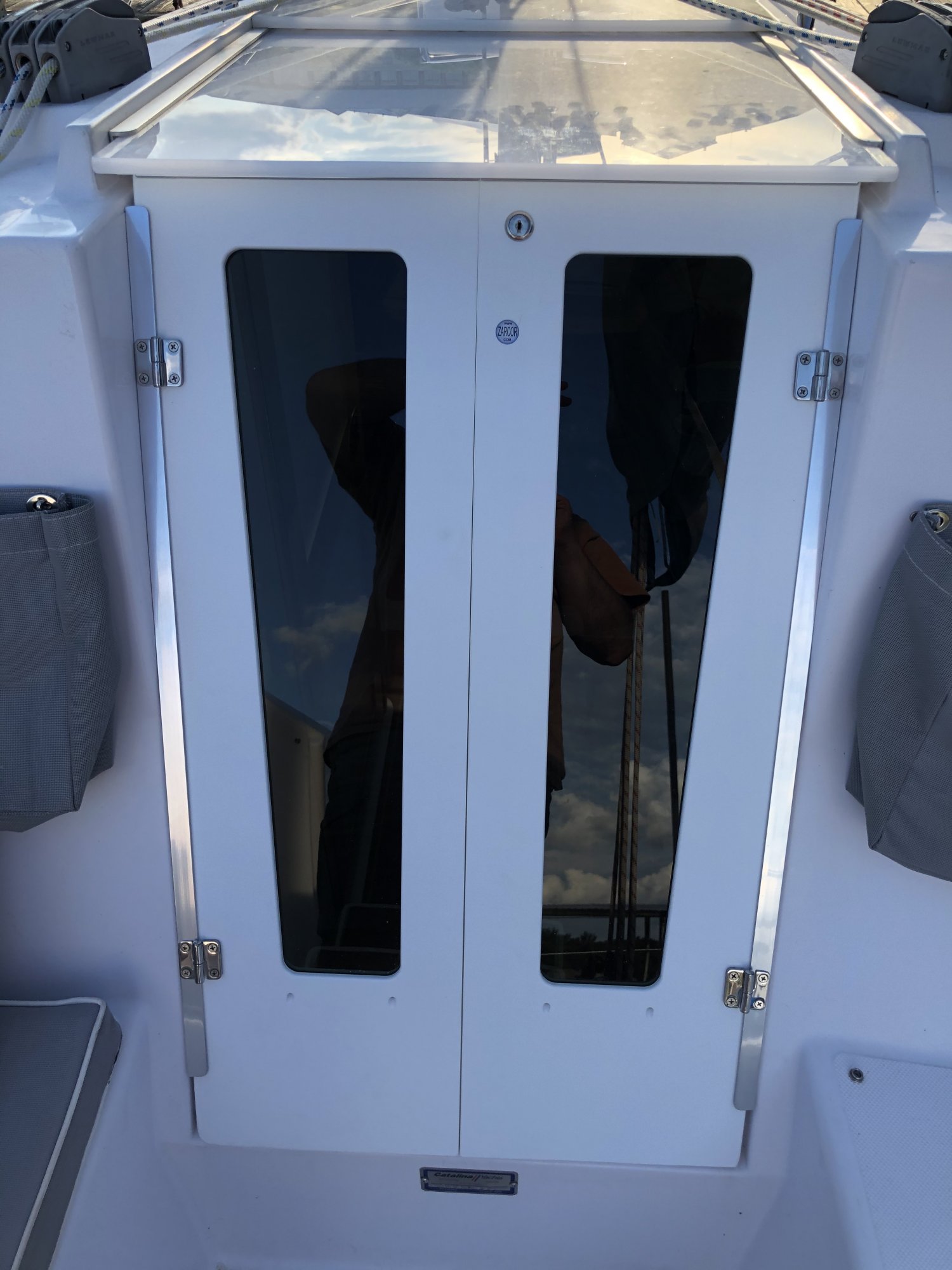 Catalina 275 Sport Grapevine
I also wanted to add a second battery, pressure water, and improve the electronics installation of the previous owner. The tiller pilot and hull transmitter for the wireless instruments were just tacked into the bilge blower power. I had this panel built by Blue Sea to give me isolated engine and house batteries plus add breakers. I installed the second battery in the port side locker. 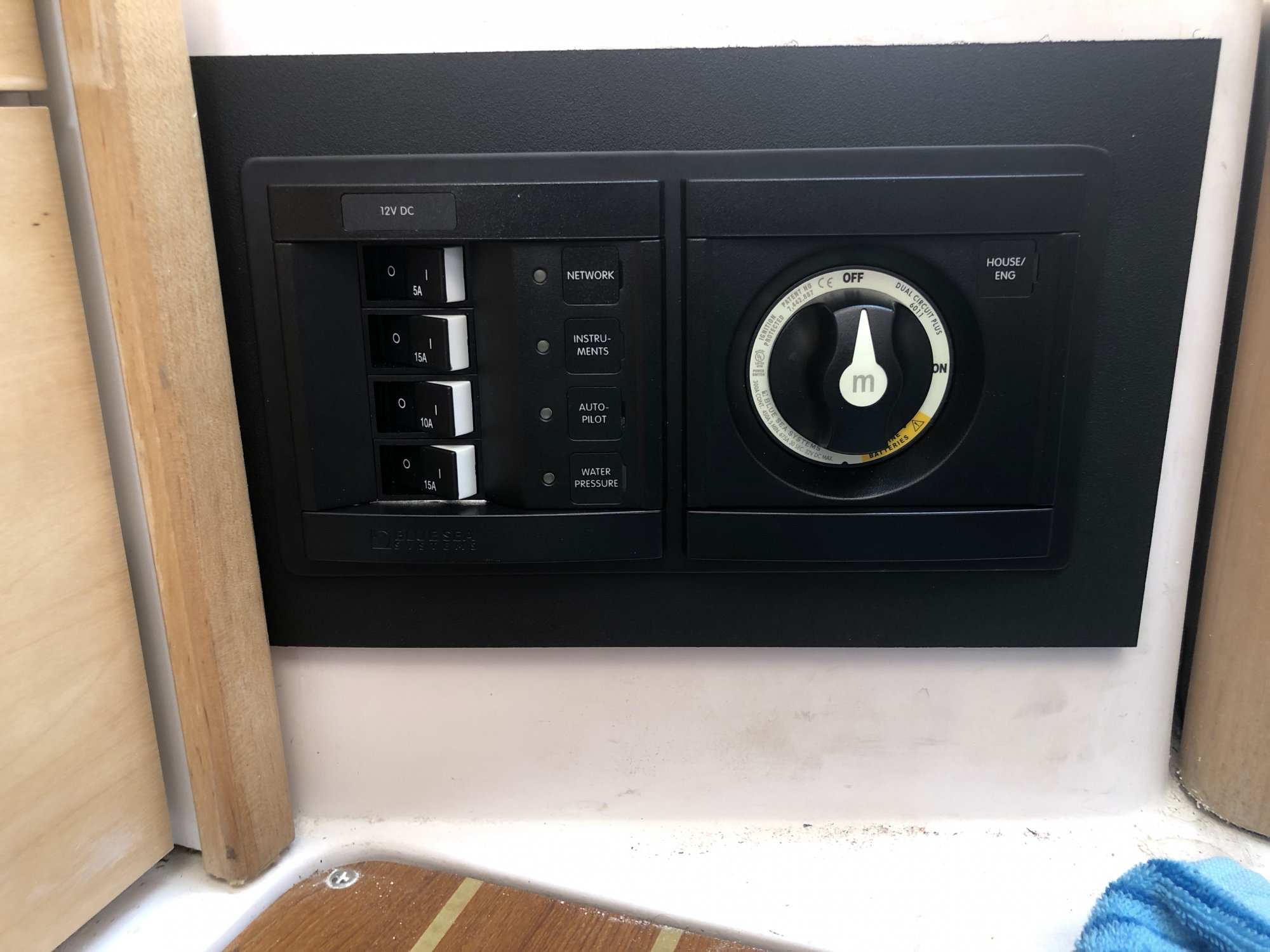 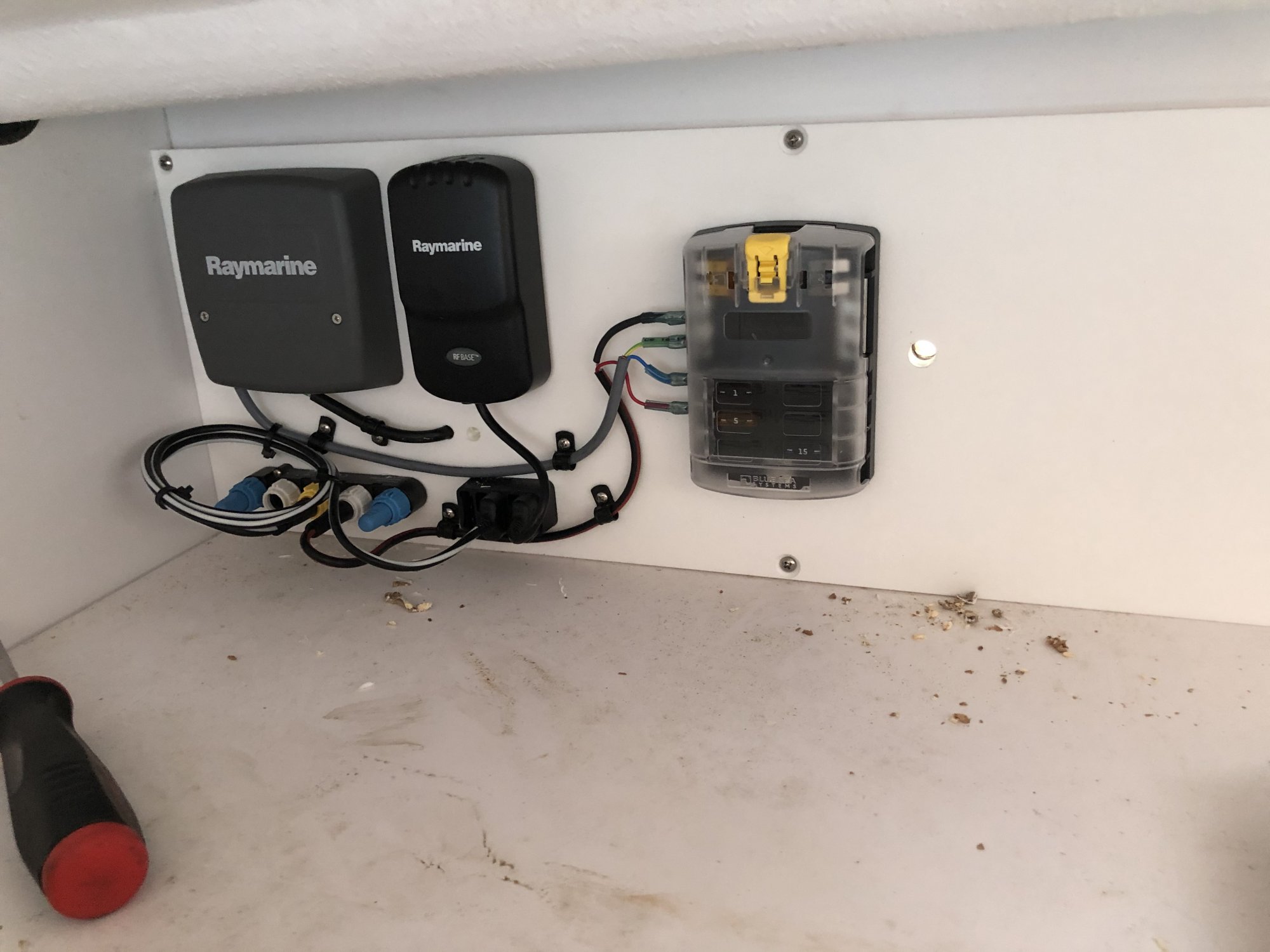 Codybear said:
My two biggest concerns with the stock holding tank is that a good starboard tack heal could cause backflowing through a leaky toilet pump seal
Click to expand

Not sure if any one else had this problem but I had changed the Guts of my Head last year after I was experiencing the starboard tack issue Cody mentioned in his post from year ago. That didn't work so I figured I'd just toss the head and buy a new one. After getting it ready to install I noticed the Instructions call for a vented loop in the toilet discharge to correct this problem. So back to the store I went to get the parts for the Vented loop lets see if that solves the problem. Of course that means Catalina didn't install the head according the manufacture instructions. Are all boats delivered with this shortfall?

I have an over nighter planned in a couple of weeks as part of an off shore 40 KM race so I'll certainly be trying it out.

1057
I'm going to install a set of tracks for a Genoa and the Sail Makers are recommending the area just inside of the Fill Caps with a 6 foot long track that runs from one stanchion to another. I know I've seen a boat with this but can't find any photos. If you have I'd like to see them and hear of any issues that you had. Also I need to install a second set of winches to deal with this. I'm thinking of putting them in line with the traveler built up on a set of starboard sheets so its level with the seat top and far enough from the stanchion to allow the winch handle to turn 360 degrees. Again looking for opinions and experience.

I borrowed a genoa from a friends boat to see what the impacts on pointing would be an its really not discernable. On the other hand the power it sends to the boat is about 1.5 to 2 knts more speed same wind... And that's with a Makeshift Block that is hanging off the stanchion in line with the traveler. The borrowed genoa has a luff about 2.5 feet short and as its a 155 off an evelyn with a 9.5 foot J measures out to about a 170 on the foot for the 275. This means the head of the Genoa doesn't even come back to the Spreader but never the less it powers the boat quite nicely. I'm gonna get a full luff on a 155 so I can fly it below 10kts when I'm too lazy to use the Asym... Such as the second half of the summer series where the Spin fleet I'm in doesn't start till near 7 so I don't get back to the slip till near 10 in the pitch dark. By entering the Non Spin feet they start near 45 minutes early, with a shorter course getting me back a bit after 8. So that's my rationalization for the effort and expense.
You must log in or register to reply here.
Share:
Email Link
Top Bottom