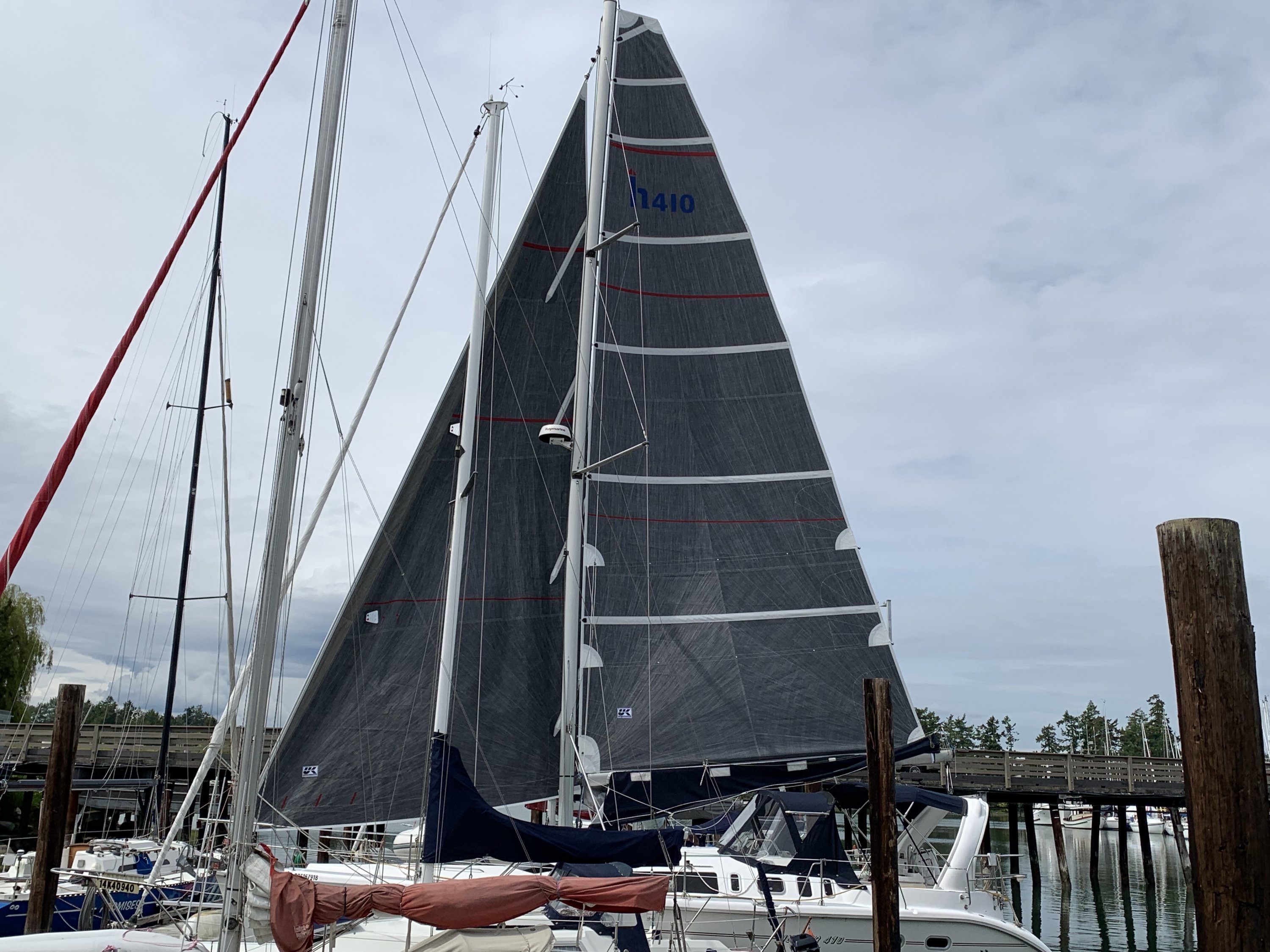 UK Sails, cruising laminate, carbon taffeta, vertical batten headsail, full batten mainsail...
Last year our boat Freewill turned twenty. The sails were original. The boat still sailed remarkably well with the old sails, but I found that to keep heel under control I was keeping the traveller a lot lower than I wanted, and keeping the jib cars further aft, etc. There was too much belly in the sails and the centre of pressure on the camber was far too aft. No amount of halyard tension or outhaul was going to fix it.

We also had other little issues to sort. Reefing lines were not running out easily making it a chore to raise the sail after shaking out a reef. Dropping the big mainsail was a capital pain in the stern. Our boom sits every high above the cockpit. Trying to pull the leech aft by hand as you dropped the sail is near impossible unless you are >8' tall. Getting the boat put to bed was cumbersome, as it always took a lot of time to tidy and cover the mainsail once docked or anchored. Finally our outhaul wasn't lead back to the cockpit meaning that any adjustment of this rather important sail control meant a trip forward to the gooseneck.

Our goal was to make the sailboat easier to sail as a couple, and to sail better in the light airs that we often prevail during a British Columba summer. Even though we don't race, performance improvements are very important to us as keeping the diesel off when travelling is a priority. In the winter, big winds are common meaning we need to keep heel under control and be able to reef quickly without stress.

We interviewed numerous lofts and really liked three of them. Our priority was to work with a local loft that actually builds sails in house, and can service them afterwards. Internet lofts were not going to be considered. We chose our local UK Sails loft and are really happy with the service we received and the quality of the sail they delivered.

For the mainsail we chose a loose foot, fully battened main, with a square (power) head. Last year we added a Tides Track so the hardware from our old mainsail was re-used. We replaced all of our lines through the boom with new Amsteel Rope which is dyneema cored. We reduced the diameter of our reef lines by several millimetres. We replaced all the blocks at the mast base, and lead the outhaul back to the cockpit to a new rope clutch. Finally we replaced the blocks on the mast for the mainsheet.

For the headsail we took the sail designers suggestion and added vertical battens to add roach, without going up a size to keep the sail plan close to stock and work well with our existing jib cars.

For sail cloth our priorities were both performance and longevity. We ended up choosing a cruising laminate cloth from Dimension Polyant (CXTech) with a carbon taffeta (GPL). This cloth weighs about 30% less than the old cloth, and is supposed to have excellent protection from mildew which is a big local concern, as well as UV and abrasion.

Our stack pack hasn’t been delivered yet, we’re still using the old one, but we’ve added a boom bracket from Mack Sails that helps keep the leech side of the bag standing upright under tension since we don’t have a topping lift on our boom. (We use a rigid boomvang.) The new stack pack will be ready in a few weeks, the old one doesn’t quite handle the stack height of the new sail.

Our first trial sails have been really enjoyable. Replacing the blocks at the mast base and for the mainsheet and running new smaller diameter lines for the reefing lines has made managing the mainsail far easier. The full battens have made dropping the sail into the stack pack much easier than before as well as supporting the roach better than the old sail. Trimming is so much less work now, as the sail just “pops” into shape straight away. 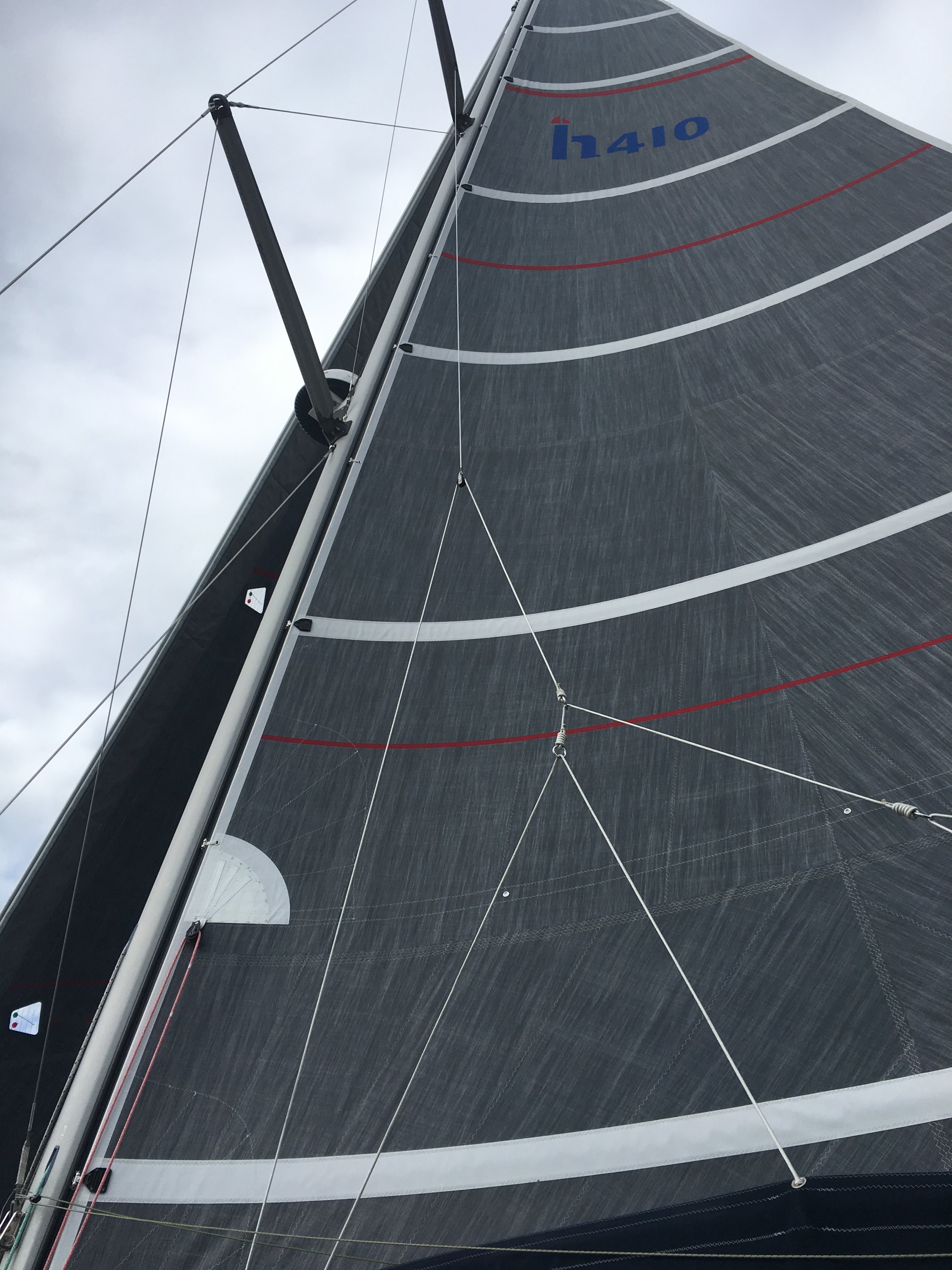 UK Sails, cruising laminate, carbon taffeta, vertical batten headsail, full batten mainsail...
I’ve included two videos. Under sail we were sailing in 15-20 knots of wind with the odd gust to 25. The water was flat as the breeze was from the shore. We sailed with a full headsail and a single reef in the mainsail. When in the steady wind we had 3’ weather helm, going up to 5-8’ in the gusts. We hit 8 knots quite a few times but were averaging around 7.5 knots. Heel was 10’-15’ most times although in a few good gusts it touched 20’. The boat sails better now than it probably did the day it was commissioned in 1998.

CAL 35 Cruiser Portland OR, moored EVERETT WA
Those sails look sweet. You’ll have to give them a work out on the Round Salt Springs this year. They just look fast.
D

Hunter 410 full time cruiser
what did that cost?

Hunter 410 Ladysmith, BC
As it was a negotiated contract I won't disclose it online. We gave the loft the entire winter to complete the sails. Since we ordered 2 sails, plus a stack pack they discounted the entire order by 20%. The prices on the other items like blocks and line was comparable to Defender online. The final price for the sails was around 5% higher than the internet lofts who quoted us for similar cloth, with matching features. Considering the amount of service we received, (trips out to measure everything, in office consultation on getting the best sail for our B&R rigged boat and our local waters, use of their dock for several nights, help with their crew getting the old sails folded away and putting the new sails on for the first time, and getting our running rigging working far better), we felt the pricing was very fair.
Likes: jssailem

Hunter 410 Lorain
Just received my new headsail in the same Dimension cloth. Thanks for the details on your purchase. I ordered mine from Precision Sails. They work very well with you. Anxious to go sailing! Capt Bill on STARGAZER - a 2000 H410
Likes: VanIslandGuy

We are looking for a new set in Australia. We really like the shape. Is there any chance of getting the measurements?

We are looking for a new set in Australia. We really like the shape. Is there any chance of getting the measurements?

You or the sail designer should measure your own rig though to be certain as there are apparently small differences between model years, (glass arch, ss arch). Also the above numbers are from the initial quote and may be slightly different from the final sail, however it gives you good data to go shopping with and gather some quotes.