Hunter 340 Baytown TX
Found this cotter pin laying on the deck of my Hunter 340 in front of the mast after the last race. Race was light wind, but we used both socked spinnakers and the whisker pole. I’ll spend the next several hours next time I’m at the marina looking for where it might have came from. It’s pretty small, so I don’t think it came from a turnbuckle or standing rigging clevis, at least I hope not. If anybody has an educated guess it would help. My mind is planning for the worst, that I don’t find the obvious place it came from and I have to pay for a rigger to go up the mast and still don’t find a open hole where it went.
It really wasn’t secured with a proper bend. I guess if you wanted to mess with someone, you could lay one of these on their deck where they’ll spot it. 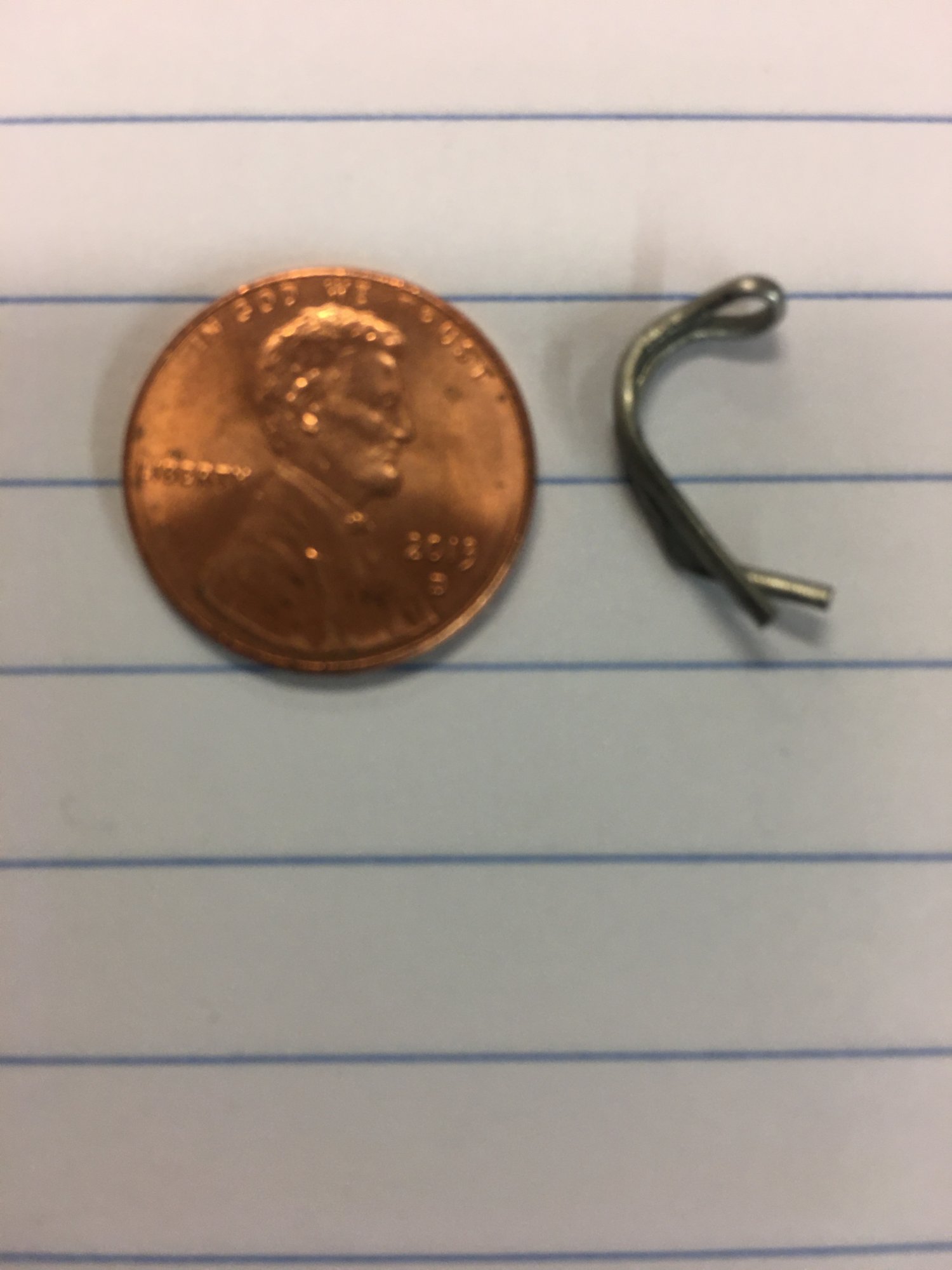 Pearson 37 Lusby MD
I had something similar happen to me with the roller furler. Saw a fairly large cotter pin on lying on the foredeck one day. Couldn't see any obvious location from whence it came, so put the pin on my nav station. On the next sail, I had issues unfurling, with the line getting mis-wound. Then I realized the drum had risen off the deck. Found an opportunity to turn downwind, release the tension on the backstay and re-insert the cotter pin where it belonged - and properly bend it. I hope you have success in determining the location for that little thing.
Likes: Bill19233

Catalina 22 Seattle
Could be from a shroud, I would check them, I prefer cotter rings.

Bill19233 said:
I guess if you wanted to mess with someone, you could lay one of these on their deck where they’ll spot it.
Click to expand

Dave Groshong said:
Could be from a shroud, I would check them, I prefer cotter rings.
Click to expand

Give me a cotter pin properly spread over a ring any day. Rings can get snagged and pulled open and then out. Then the pin falls out and then the rig comes down. No way I will ever use rings for shrouds or stays ever again.
Likes: BrianRobin
R

Boston Whaler Super Sport Pt. Judith
I hate it when this happens....

Hunter 340 Baytown TX
There is the off chance someone's shoe picked it up from the dock or parking lot and decided to drop it on the deck. I will try binoculars if I don't find something right away. Watching the track of Delta, may have to go down and storm prep the boat, again, for the fourth time in the last couple months. Right now looks likes Louisiana again.

Hunter 27 Pecan Grove, Oriental, NC
From the way it is bent and its size, I would guess that it came from a turnbuckle. As the shroud tried to unscrew from the turnbuckle, it bent and forced out the cotter pin.
Likes: hj5150 and ggrizzard

Hunter 1978 H30 Cherubini, Treman Marina, Ithaca, NY
It looks like the pin from your broken boom kicker of last week.
Likes: pa391as and Will Gilmore

C&C 110 Bay Shore, Long Island, NY
You could use one of your cameras with a telephoto lens to take some high resolution photos. Zoom in on the photos and you might just find the former home to this cotter pin. Wishing you luck.
Likes: Will Gilmore and Bill19233

BlowMeAway said:
It looks like the pin from your broken boom kicker of last week.
Click to expand

That happened in July of 2019, the post was revived with a recent reply. But, the vang does have small cotter pins in several spots. I will definitely check it. And the gooseneck, and the whisker pole, and...
Using the camera is a very good suggestion. And I see the advantages and disadvantages to both rings and pins. Looking at photos, all the standing rigging turnbuckles have rings.
Likes: BlowMeAway

Or, you toss one into the close -aboard competitions mainsail high up at the start and it falls to the deck!
Likes: jssailem

JRacer said:
Or, you toss one into the close -aboard competitions mainsail high up at the start and it falls to the deck!
Click to expand

That is an evil trick played upon some race competitors. When it hits the deck, usually causes all sorts of activity looking for where was it's origin. You notice the boat nearby has a bunch of snickering crew members. You know where it cam from.

JRacer said:
Or, you toss one into the close -aboard competitions mainsail high up at the start and it falls to the deck!
Click to expand

Have you not read about the new computerized - traceable cotterpin that many race boats are now using ? No fooling them as they instantly know where all their cotterpins are!

Pearson/ 530 Strafford, NH
Paint em.
This goes back to my career when a jokester dropped a red bolt under our fire truck. Three of us looked for two hours bumper to bumper for a possible loose connection. We got even during the night shift.
Last edited: Oct 6, 2020

Hunter 34 Portsmouth
for a pin that holds a block to the boom?

All U Get said:
Paint em.
This goes back to my career when a jokester dropped a red bolt under our fire truck. Three of us looked for two hours bumper to bumper for a possible loose connection. We got even during the night shift.
Click to expand

I've seen that joke done a few times over the years with friends. Back when you didn't need a computer to work on your car.
Likes: All U Get

Hunter 340 Baytown TX
Alright, embarrassing, but I think I found where the cotter pin came from. I went down to the marina to put out extra fenders and stow the canvas for the tropical storm force winds expected with Delta. It was still light, so I inspected the rig looking for a missing cotter pin. I used binoculars to check the spreaders as suggested, worked great.
I found the cotter pins at the lower diagonal connection on both sides were not secured properly. Eye level, gets looked at every time the main cover goes on or off and I paid a large sum to have the rig inspected and tuned just a couple years ago. 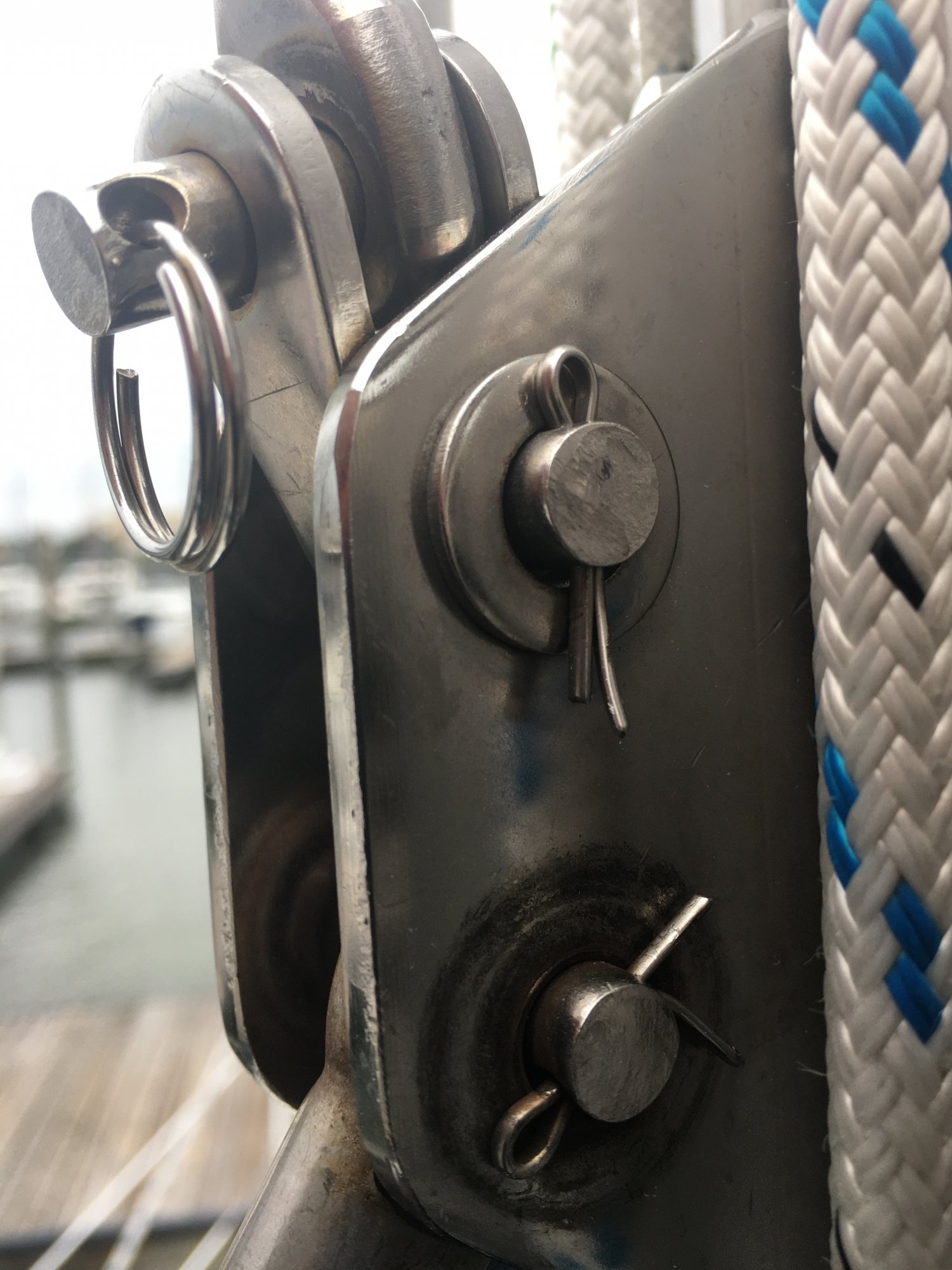 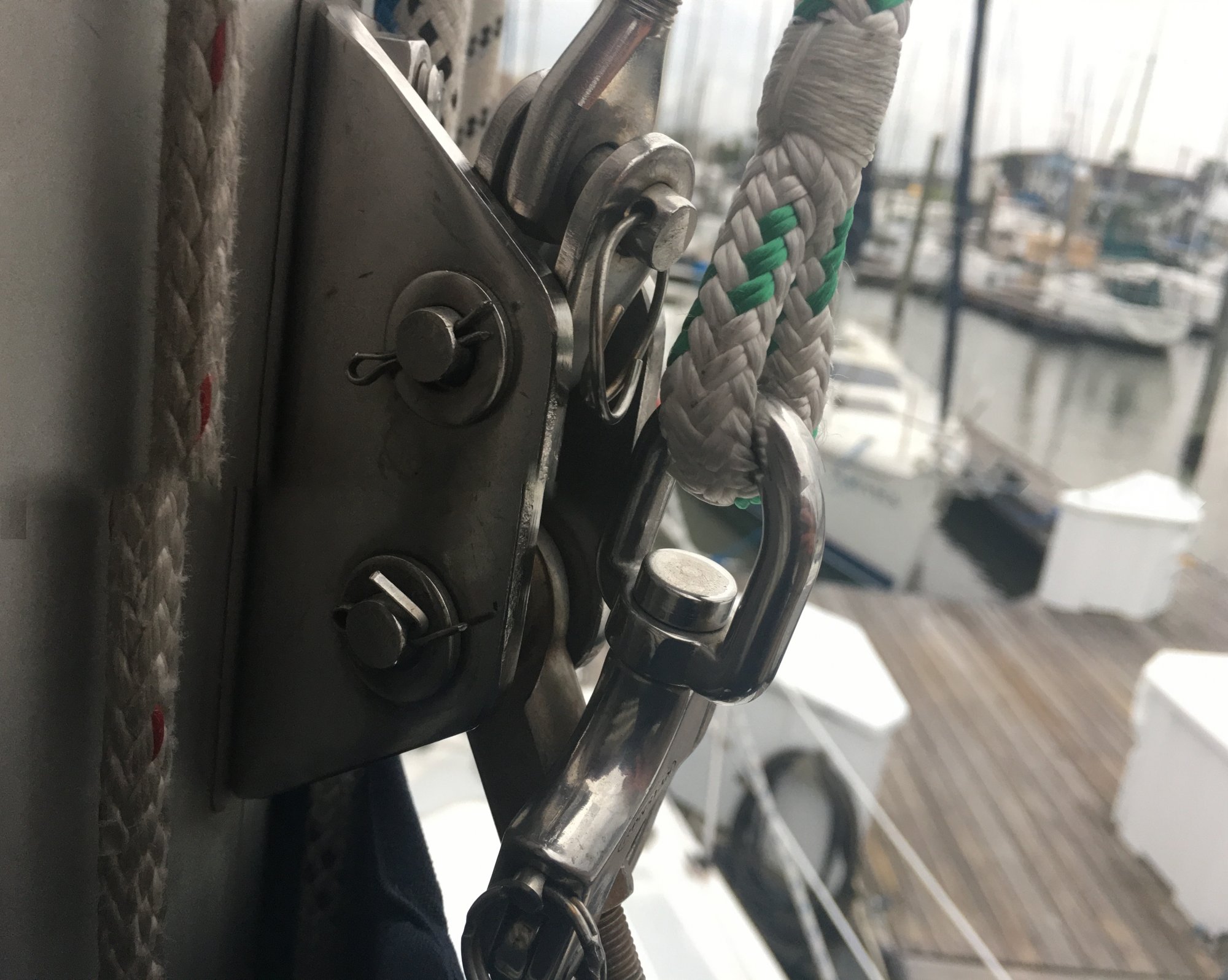 Found several more that weren't properly secured. I tried to convince myself the one found on the deck came from locker bottom and fell off the some cover or whatever that was stowed there.
Decided to look at the vang, but that couldn't be it, I was the one that worked on it last, rebuilt the whole thing. 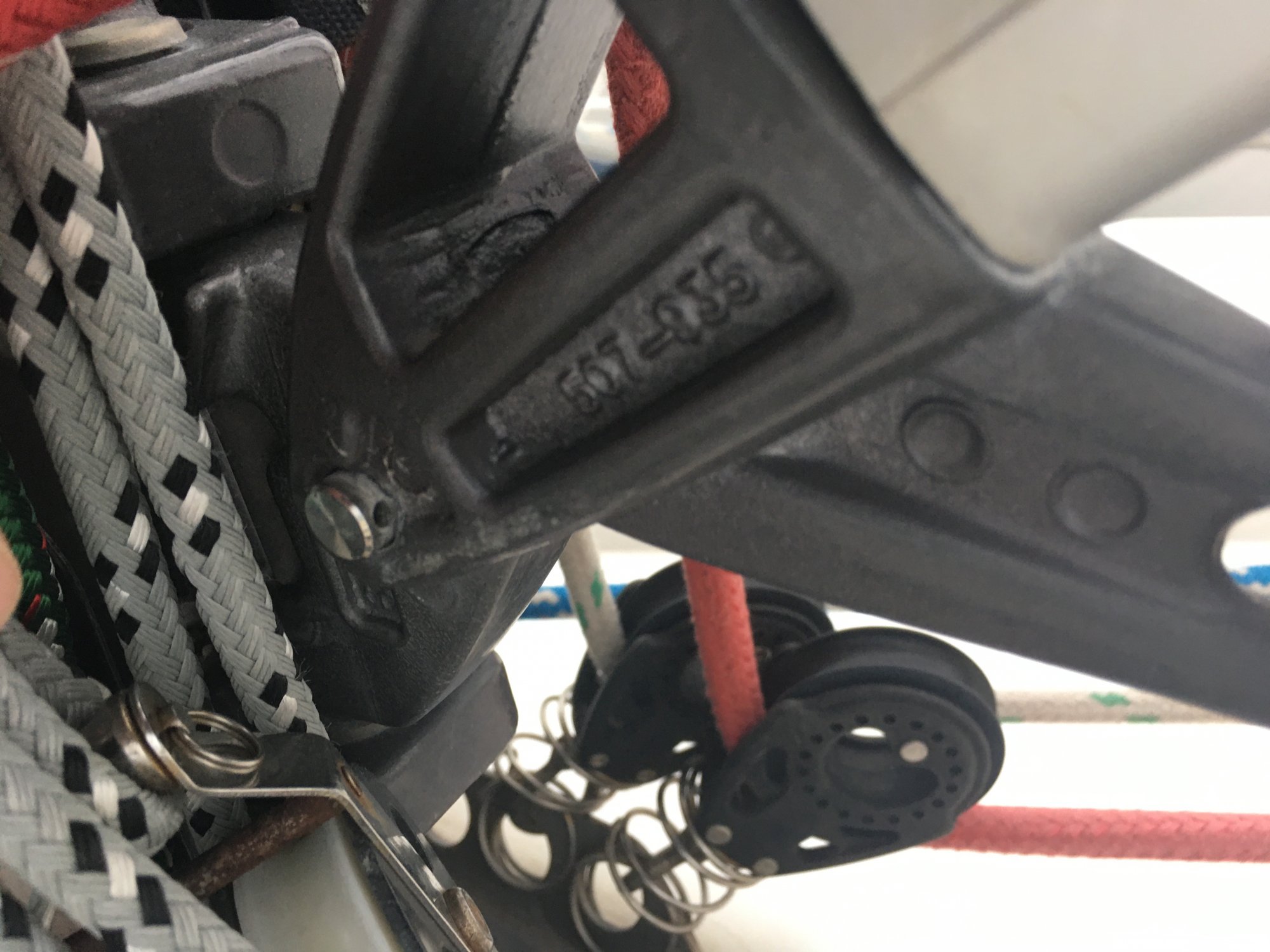 Had to hammer it back in, but all the bends in the cotter pin fit the clevis pin the vang mast bracket. BlowMeAway wins the substantial prize that was offered!
Likes: splax, cb32863, Hunter216 and 1 other person

Beneteau First 235 Lake Minnetonka, MN
Glad you found it and had no issues. It is un-nerving finding spare hardware on the deck for sure.
Likes: splax
You must log in or register to reply here.
Share:
Email Link
Top Bottom