Between Boats near Vancouver, BC
I'm not sure I quite qualify for this forum, because I don't actually have a sailboat! But I am serious about getting one.

I have a bit more background in motorcycles. My first bike was a 69 Honda Z50, back when it was nearly new. I rode dirt bikes a little as a teenager, but didn't get serious about motorcycling until my twenties, when I bought a Honda GL500 Interstate. I owned that bike for over 25 years. I've also owned a 95 Triumph Speed Triple and an 04 ST1300, both of which I still own. One of those may have to go to, to accommodate the sailboat, though.

S2 27 Delaware Bay currently
I had even less sailing experience. I took lessons this past summer, and bought my first sailboat.

Tanzer 26 Nc
Well, this particular group certainly isn't going to get crowded! Still, seems the two very different sports would have similar appeal: a sense of freedom and intimate involvement with the objects of our affection. I started out on what was called enduro motorcycles and beach catamarans. Had a Triumph Trophy Trail for a day. Another for a week. Both had motor failure. Both new! Got a Suzuki 185 and rode all over the mountain trails for years. First sail boat was a catamaran... of sorts. We deemed it the beer barge at Salter Path on the Carolina coast. Later built my own Isotope, enjoyed club racing and moved up to a NACRA 5.2. Now I'm looking for my third coastal cruiser and enjoying my 30 year old Kawasaki KLR 600 and 25 year old Honda Hawk GT647, bought new and still ridden regularly. Hope we attract more folk and can share tall tales from salt and dirt.

C&C 30 Mk1 Silver Harbour, Lake Winnipeg
I suspect that some people don't know this sub forum is here. I just discovered it today.
Tanzer 26 is a great boat. There are bunch of tanzers around here.
Not sure if @Tedd is still around, but we own a Bombardier Invitation which is are currently selling due to lack of use. Got a C22 now and hope that we get out on it more.
I grew up on bikes.. my first one was a Honda Z50... then CT70.. CB125... etc. I currently have 2 CB550 bikes, one of which i plan on making into a race bike replica. The other is original and I plan on keeping it that way.

Leeward Rail said:
Not sure if @Tedd is still around, but we own a Bombardier Invitation which is are currently selling due to lack of use.
Click to expand

Yep, still around, and I bought a boat! About a year ago we bought a 1995 Macgregor 26S and have been having a ball with it. In fact, I was in my workshop looking up something on the web for my new radio installation when I discovered your post. As I was hoping, sailing the Mac isn't really all that different from sailing the Bombardier. Everything is bigger but works pretty much the same.
I still have two of my bikes, too: a 1995 Triumph Speed Triple and a 2005 Honda ST1300. I'm for sure going to sell at least one of them, but not sure which. I bought the ST planning to do some trips with my wife, but we didn't end up taking all that many trips and, now with the boat, probably even fewer in the future. So maybe the ST should go. On the other hand, I might sell both and get some kind of dual sport. We're planning to retire to Vancouver Island, and a dual sport would probably be the cat's pajamas over there.
In the meantime, I have lots of great boat projects on the go. I built a mast-raising system that makes it easy to put the mast up and down while on the water (for less screwing around at the boat launch). I'm also working on a new boom attachment method that will allow me to leave the boom and mainsail on when the rigging comes down, also to speed up launch and recovery. We tow nearly every day we sail, so it's important to me to make the rigging work smoothly.

Crackaloon said:
I had even less sailing experience. I took lessons this past summer, and bought my first sailboat.

Lots of sailing experience, but not so much biking. Last Honda I owned was a HONDA PA50 at University of Florida. LOL 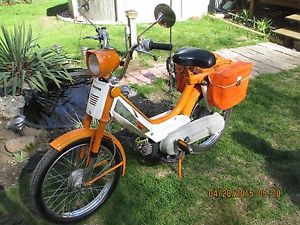 It ran great and was lots of fun, but super slow.

C&C 30 Mk1 Silver Harbour, Lake Winnipeg
@Tedd Glad to hear you got a boat ! I'm with you on the dual sport. They can get you into great locations for camping or just riding.

Going from a boat like that Bombarier to a bigger boat is a good thing. IMO small boats will teach you a lot more initially, that a bigger boat can.
When we were sailing a 44ft sloop years ago, the biggest challenge was getting used to extra weight/momentum when in marinas. Also.. lots more power in the rig, so those higher loads could get us into trouble.
We were glad we started with small boats. They will tell you pretty quickly what is going on.

@pateco PA50 ? Never seen one. Kind cool ! Bikes like that are uncommon, but they are fun. In fact my favourite rides so far, were in SE Asia on 125cc bikes not much different than that.
Last edited: Jun 13, 2018
Likes: pateco
You must log in or register to reply here.
Share:
Email Link
Top Bottom