Catalina Capri 22 http://www.chelseayacht.org
Anybody have a clear diagram of how the internal out-haul is supposed to be set up?

WD Schock Wavelength 24 Wallenpaupack
Hey cool, I just did this on my Capri 25, which happens to have the identical boom to the Capri 22 race...
But, Catalina direct has you covered.. Look at this 8:1 replacement. If you look at the picture like that is all INSIDE the boom... you get the idea. 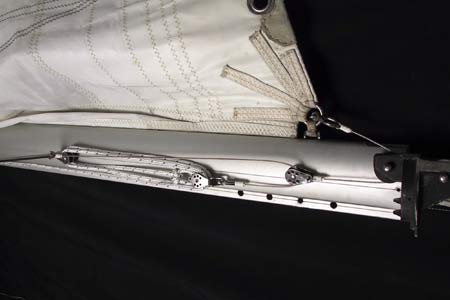 By the way what they DON'T show in their picture is a PIN that goes completely through the boom. They mention it in the notes. It holds the cable end of that whole mess... the other end of the line, passes all the way to the gooseneck fitting, goes around a sheave, and back up halfway along the boom... and out to a clam cleat. If you pull the line, it shortens that whole rig, which in turn slowly shortens that last block. It's pretty ingenius how they design that whole rig... it's JUST long enough if you follow the instructions in the notes to the letter.

"One early drawing indicates the pin in the boom is located only 18" forward of the aft end of the boom. This does not provide enough space for the outhaul. If your pin is only 18" forward, you will have to relocate it farther forward by drilling two new holes and moving the pin."

This was exactly the case on my boom, so I moved the pin to 25" and viola, works great. Now if you are planning on doing this exact part? or even rebuilding your existing 4:1 or 6:1... lemme tell you it's a freaking BEAR to put back into the boom! here's how I did it... I took a 1x2 about 24" long, and hammered a nail in the end, then bent the nail forward... I hooked the cable/ring on the nail, and slid the whole thing into the boom. Lining up the hole in the boom to the cable/ring, I put the pin through, then slowly pulled the 1x2 out. This might make NO sense to you NOW, but when you tear apart the boom it'll all make perfect sense!

By the way, the gooseneck end of the boom was a real bear to put back in after I got it apart. The sheet metal screws holding all the parts on were worn out, and obviously had been replaced at least once.

By the way, the new 8:1 outhaul, provides a nice 6-8 inch amount of travel in the outhaul.
N

1258
Here is some outhaul info from 2004 from a portion of the old site that was lost. I did this to my CP 22, and so far, I really like it. Although the original poster calls it a 8:1 set up, it is actually only a 4:1 setup - it lacks the extra block that the 8:1 Catalina Direct package has. The only "non-stadard" piece of hardware is the Harken block that has the loop turned 90 degrees from the pulley shaft. This offset makes the whole thing work - it eliminates any line interference between the running part of the rigging.

The schematic the OP talks about and a picture of the 90-degree block are in the attachment.

‪Outhaul Upgrade‬
by ‪Reverand » Thu Sep 02, 2004 1:00 pm
Last winter, three of us replaced our original outhauls with new blocks and lines. We modeled the upgrade on a successful conversion pioneered by Madcap, hull #5. The attached diagram by Jamie depicts the new schematic.

For hardware, we used the following:

The part numbers are those out of the APS catalog (‪http://www.apsltd.com) You can substitute 3/16” line for the 1/8”. This will make the splicing easier. When finished with the assembly, don’t worry about the extra line, easier to flub a couple splices, cut off and try again, than run short.

The hardest part is replacing the Boom Pin. For this little operation, I took two ¼” dowels, wrapping a rubber band about 12” from the end. Using the dowels like chopsticks, I was able firmly hold the Harken 29mm 90 degree block (with splice). We then placed the boom on its side between two sawhorses. Shining a light from below, you can then gently slide the chopsticks into the boom, line up the hole with the block, and drop in the Boom Pin. The chopsticks will then easily slide off the Harken block.

Including disassembly, splice time, and re-assembly, we averaged about an hour per boom for the upgrade at our little Boom Party.

shnool said:
Hey cool, I just did this on my Capri 25, which happens to have the identical boom to the Capri 22 race...
But, Catalina direct has you covered.. Look at this 8:1 replacement. If you look at the picture like that is all INSIDE the boom... you get the idea.

Note the description on this page:
http://catalinadirect.com/index.cfm/pro ... -cp-22.cfm
.
Click to expand

I just did the exchange to a 8:1 today. @shnool thx for the install guide. Proofs my point to use this forum vs Facebook to exchange technical info and help....

Here’s how I did it:

Step 1: Set up new 8:1 outhaul correctly based on CD picture on their website...

Step 2: Unscrew back part of boom. The CD kit comes with a replacement sheave for the outhaul. You need to route the end part of the outhaul while replacing the sheave or if you do not need to replace you have to take out the sheave anyway....

Step 3: Sew an extension line to the end of the old outhaul line exiting forward at the boom. This enables you to later pull the line out to the back of boom so your can sew on the new line end and pull thru the sheave at the gooseneck out forwards of the boom....

Step 4: Based on @shnool recommendation I used a HomeDepot wooden measuring stick and a wooden pin installed at one end with a slip fit (diameter not larger than hole in boom for the pin). Put the forward end of the new outhaul over the pin. First slide the loop end of the metal wire over and than the block. The wooden pin should stick out on the opposite side a bit. Leave the polyester line that will be routed later thru the boom hanging out at the open end of the boom. Make sure the old line stays on top of the pin when you pull the pin. The new line will need to go over the pin after install... I used both ends of the old line and pulled bothe end and used a clamp hold tight.

Step 6: Sew new outhaul line to old line. Pull on the old line to start pulling in new line thru the boom.

Step 8: pull new outhaul line thru all the way and reinstall end of boom fitting.

Notes: the travel of the new system is slightly less than the old because of all the blocks involved with a 8:1 setup.. 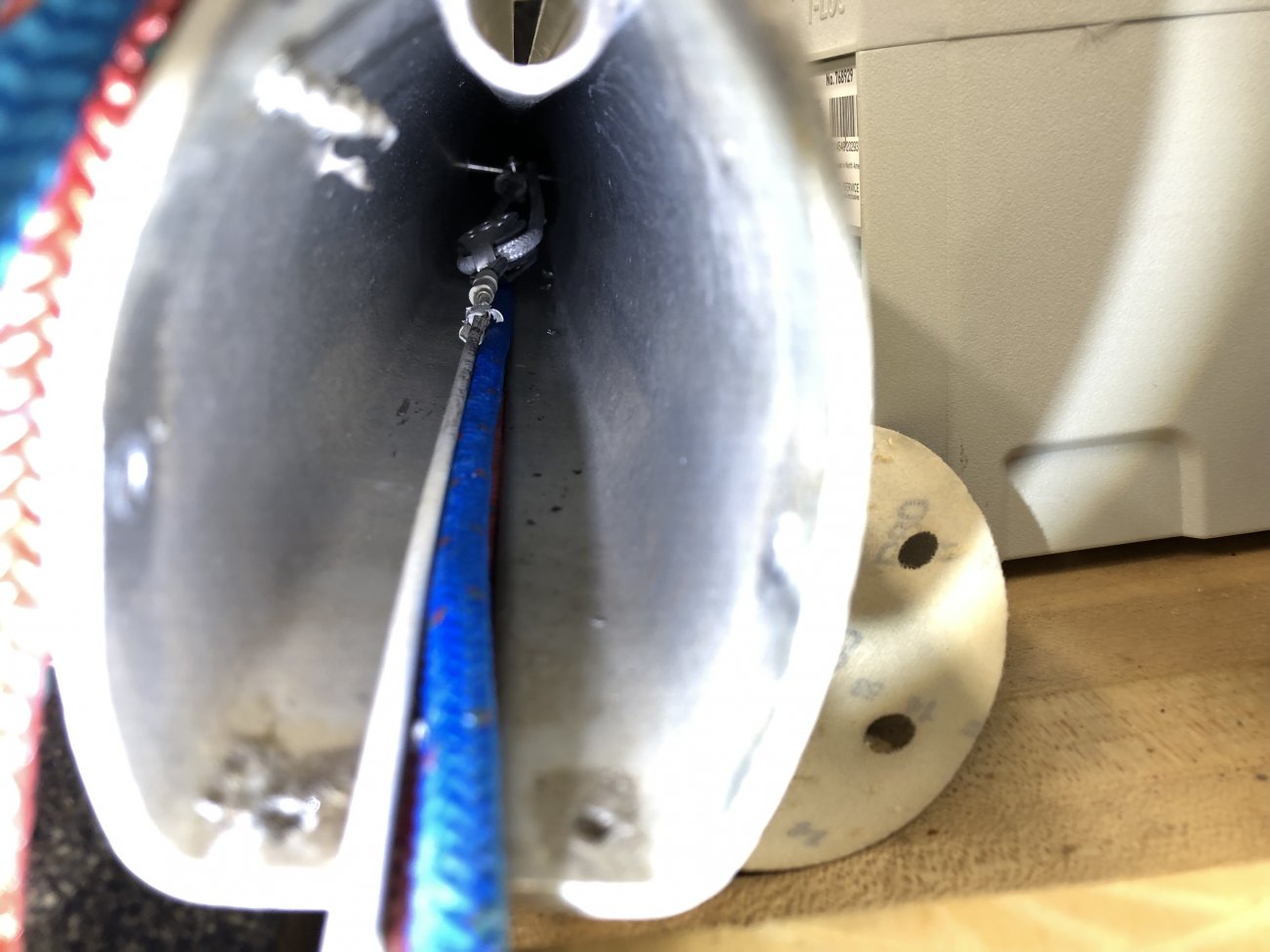 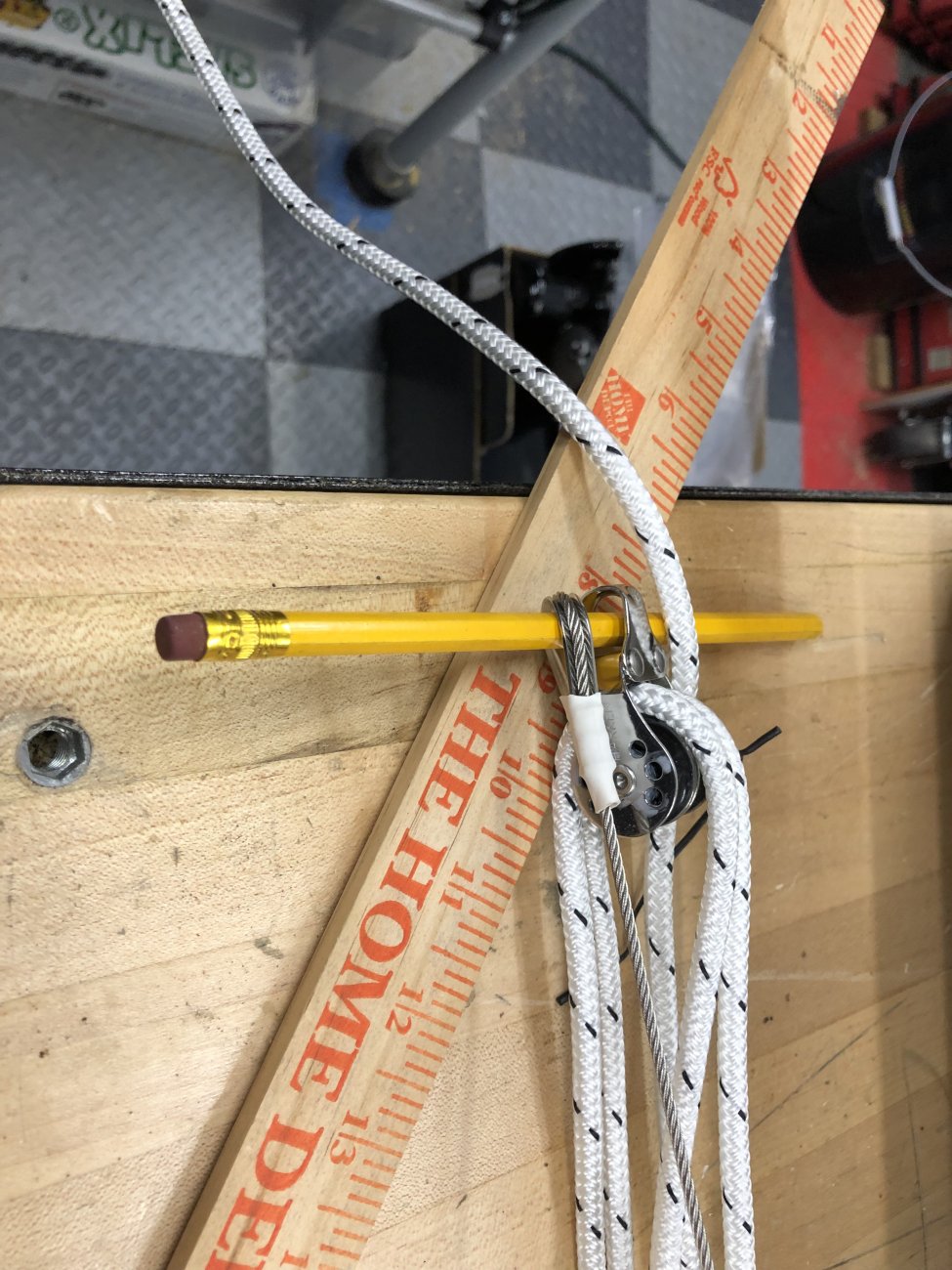 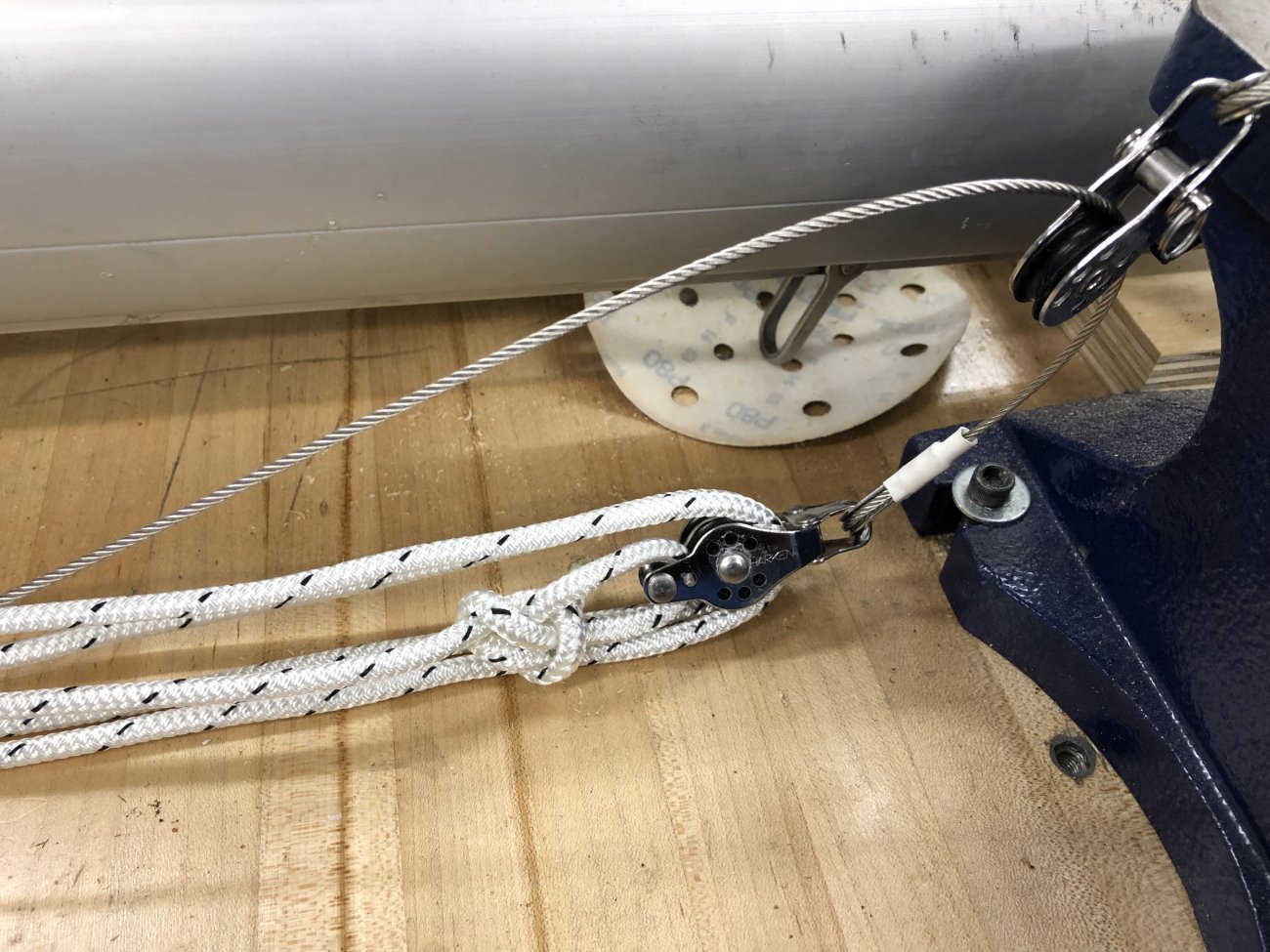 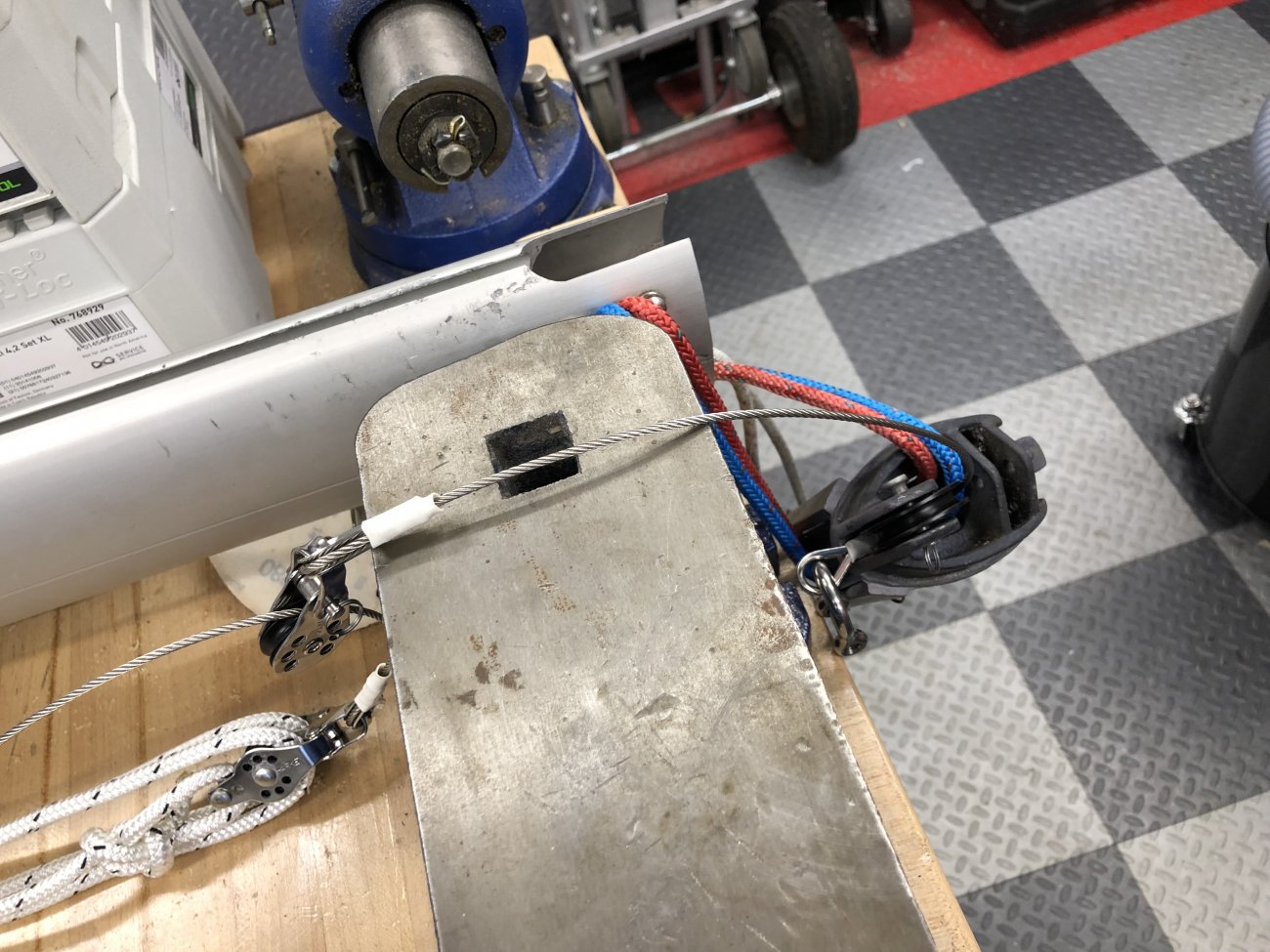 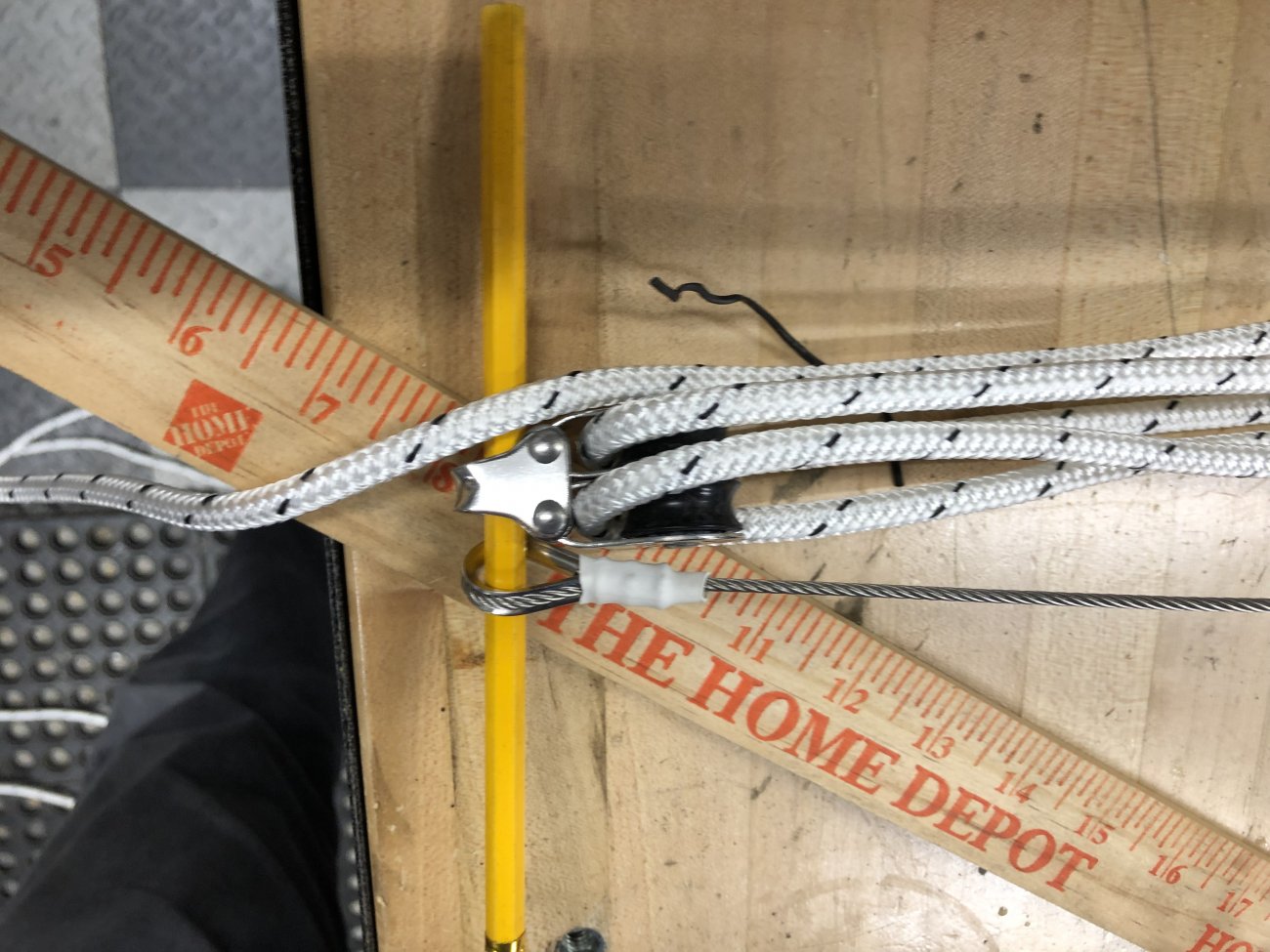 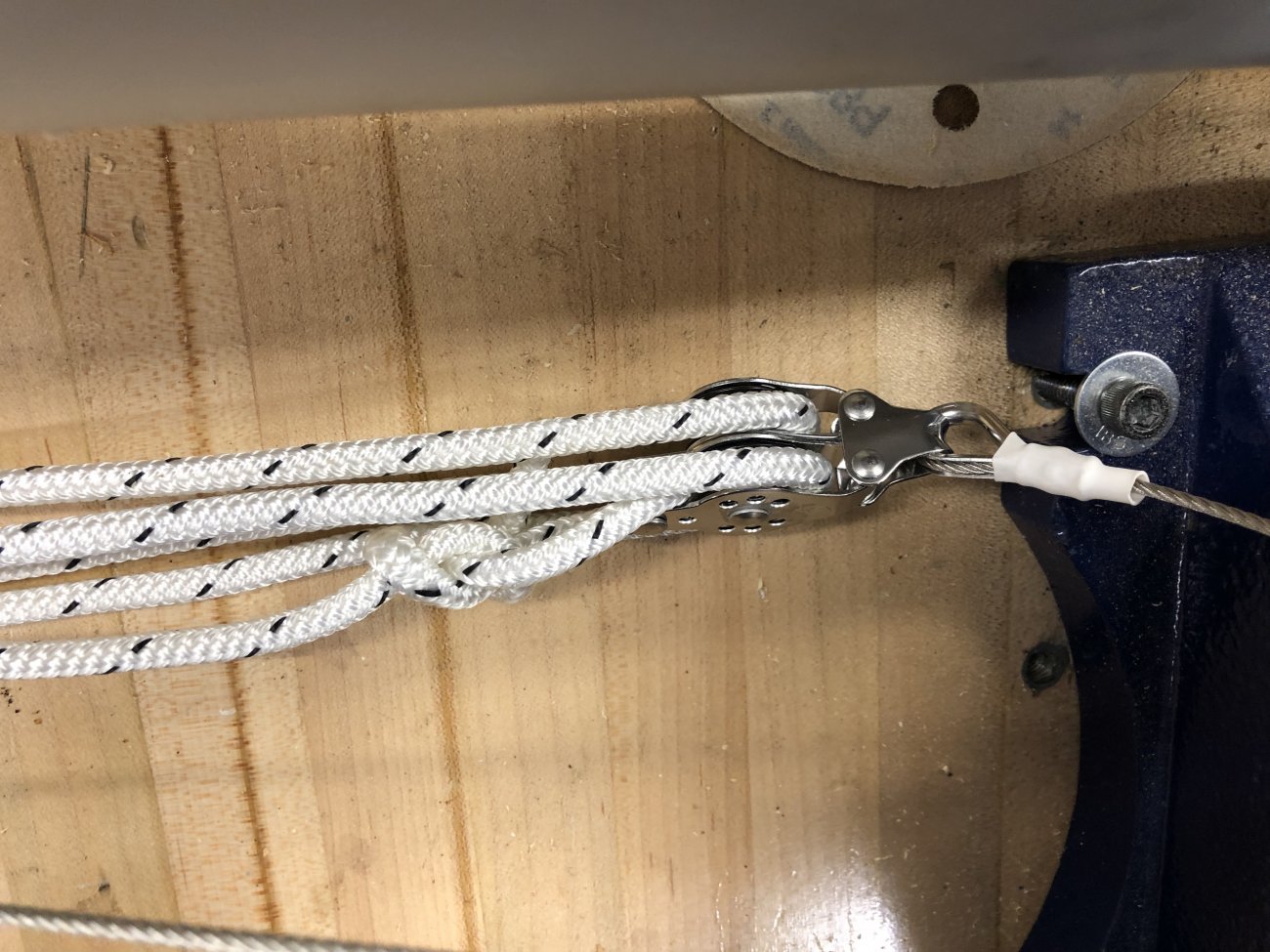 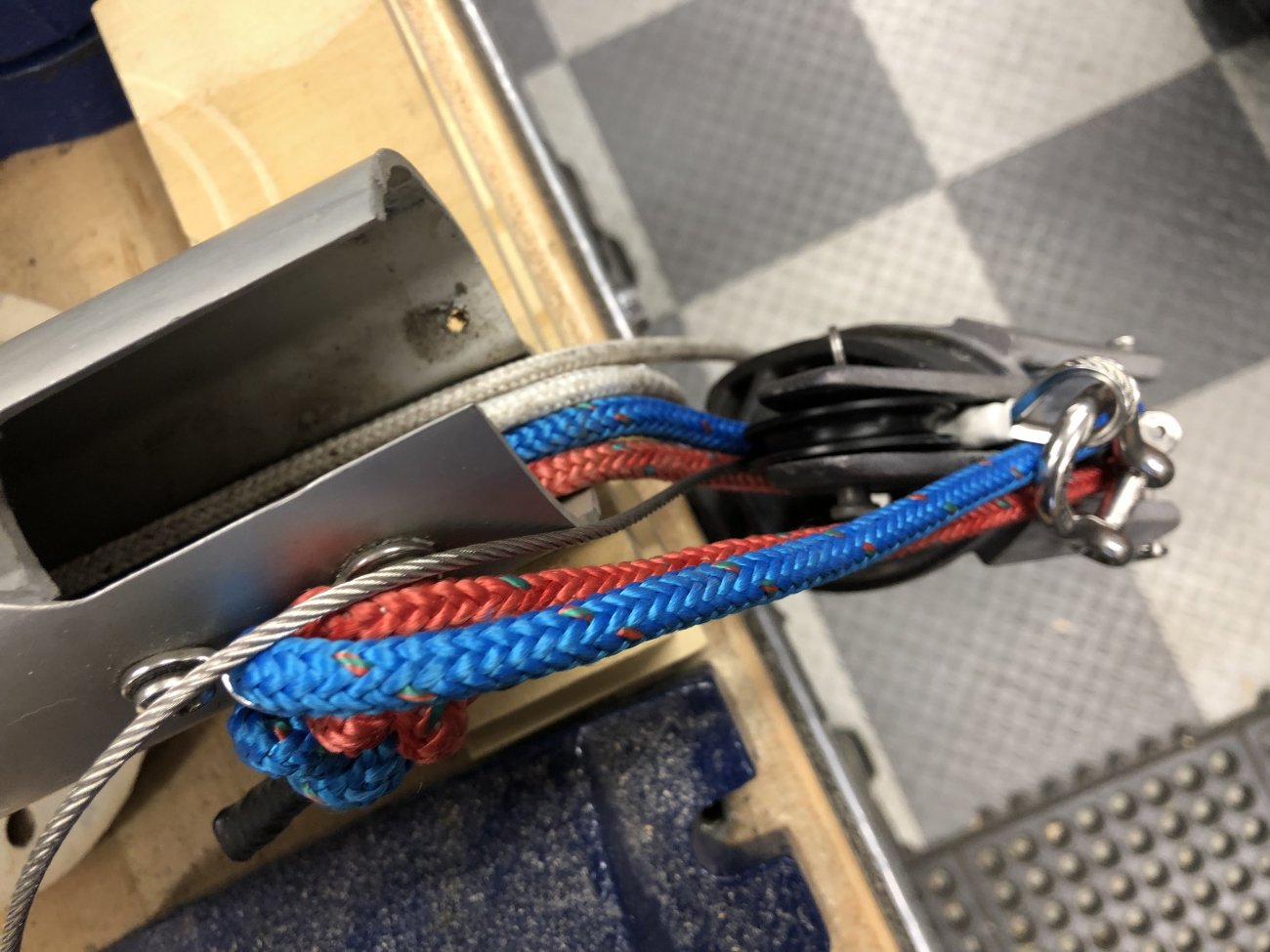 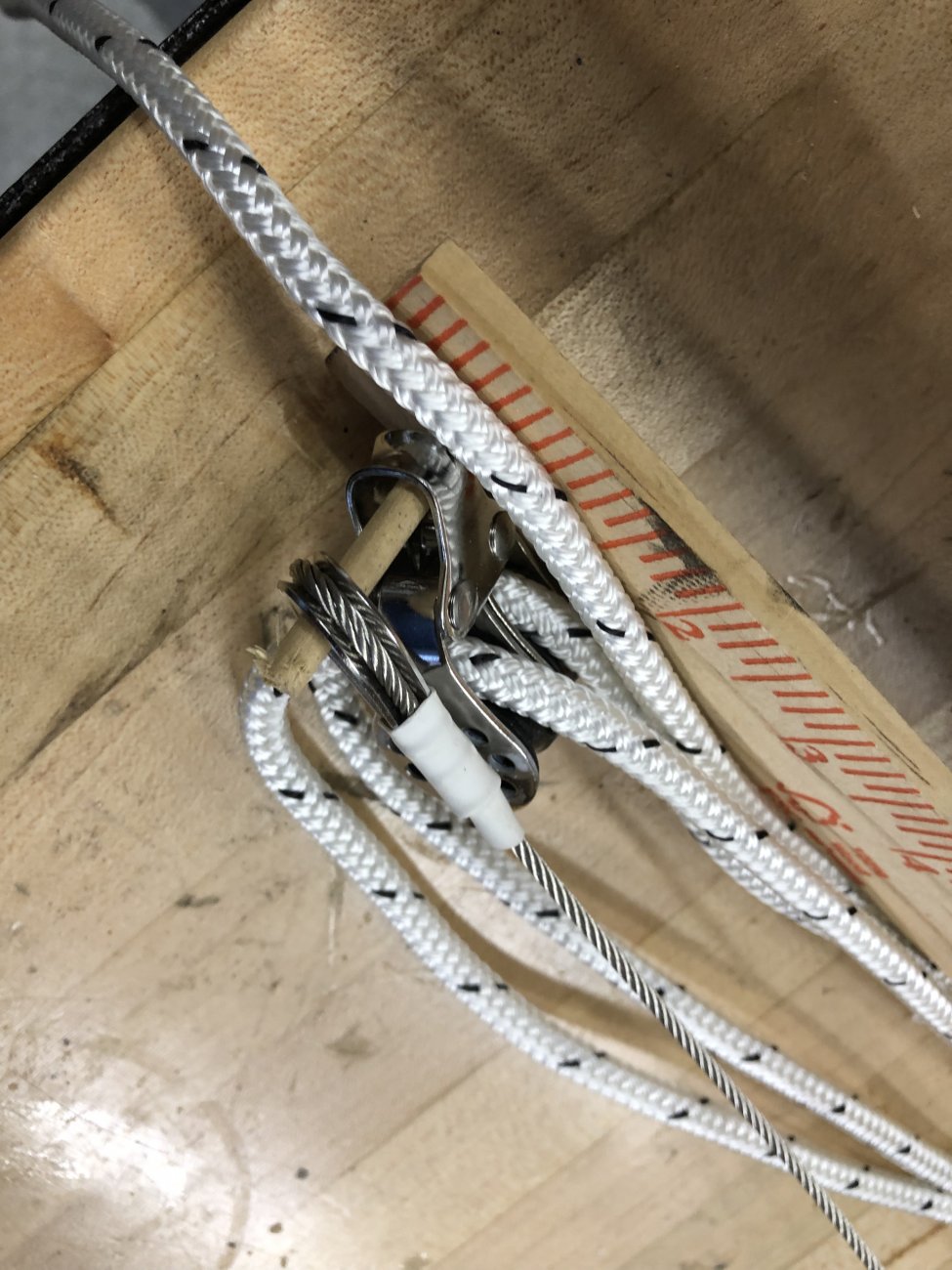 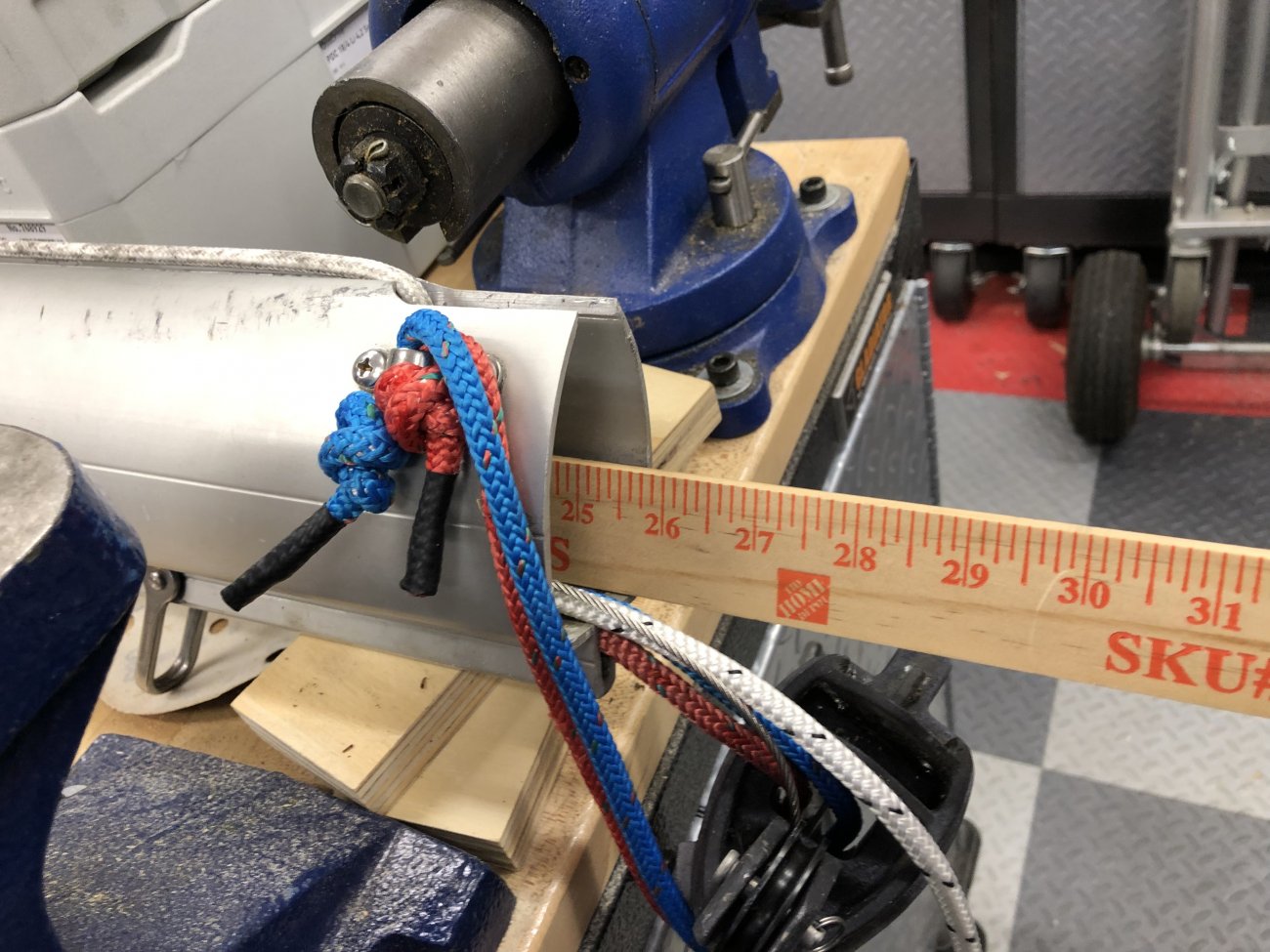 Catalina Capri 22 1139 Mamaroneck, NY
Here is a better picture that CD sent to me...