Between Boats near Vancouver, BC
I've been tracking Hunter 260 prices for a couple of years now and I thought some people might be interested in my latest data. The chart below shows asking prices (in USD) for H260s that have been listed since February, 2021. The dashed blue line is an exponential fit through the data (y = 53307e^-0.048x) and the black dashed lines are standard deviations from the blue line. 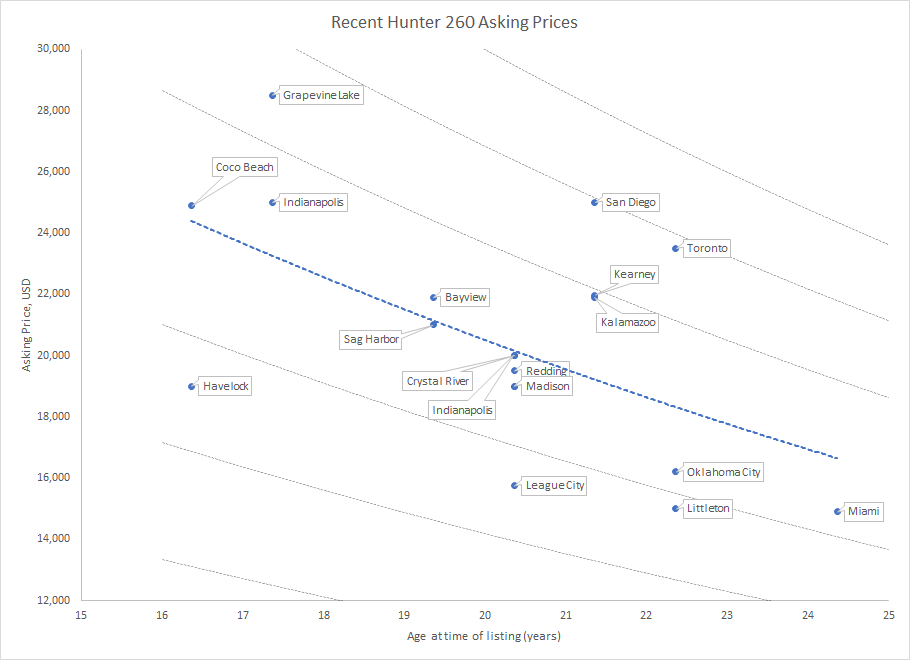 To the best of my knowledge, this data includes only swing keel, non-inboard H260s.
Likes: SkookumZac, rgranger and Phil Herring

Hunter 46 Point Richmond, CA
Do the selling price data factor in trailers since they are relatively expensive and necessary, if required?

sail sfbay said:
Do the selling price data factor in trailers since they are relatively expensive and necessary, if required?
Click to expand

Yes, all of the boats in this data set include a trailer. I've only seen one H260 so far this year that didn't include a trailer. When I looked into it, I found that the price of a new trailer (same model of Magic Tilt as the original) is CAD 8,526 (USD ~6,840), plus applicable taxes. So, not negligible!

The boats in this data set are pretty similarly equipped, with the only major differences being wheel verses tiller and type of head. I've been following H260 prices for a couple of years now (~50 boats in total) and have seen no evidence of any difference in asking price between tiller boats and wheel boats. I haven't investigated whether head type makes a difference.

BTW, these are asking prices, not selling prices. I do have some generic (i.e., non H60) data on selling prices that suggests that selling prices are typically about 5 percent below asking price for boats of this type. Equipment differences (such as tiller versus wheel) might result in some difference in selling price, but I don't have that level of detail in my data.
You must log in or register to reply here.
Share:
Email Link
Top Bottom