How to tell when one needs new sails

Catalina Capri 22 San Francisco
Hi, I have a 1988 capri 22 and the sails are in working order, no tears or frays or anything, but they are probably fairly old - the sail numbers are cracked and peeling.

How do I tell if it's time for replacement? Can I measure the draft of the sail somehow to get an idea? My main seems really deep - upwind performance is pretty mediocre, but maybe I just don't have things adjusted properly? I've tried various traveler positions to get more down force on the boom and whatnot, but it seems impossible to flatten the sail out any.

Hunter 30t 9805 littlecreek
New sails are always nice. If your asking this question there probably done. Somethings you can do to get thru season because usually sails are cheaper to buy in winter is. Add a Cunningham if you don't have one. Pull mainsail up tight on winch then give it a ton Cunningham forward and down to flatten and set outhull up with more power add extra pulley or put on winch. Play with all luff lines to try flatten. On jib pull haylard tight real tight and get your cars back. Of course a back stay adjustment will help both sails. And down wind power u need let all that out
M

Hunter 34 Berkeley
Ask an experienced racer to look at them. There are telltale signs (no pun intended). First of all, are they ratty and worn? With the main, the telltale sign is a diagonal wrinkle across the sail when it's up and filled that won't go away. With the headsail it's a belly that won't go away. When the jib sheets are hauled in tight the sail should flatten out in a simple curve. If, when pulled tight the sail has an S shape along the bottom when it starts flat at the clew and then belly's out a bit the sail is done.

Whatfiero1 said:
New sails are always nice. If your asking this question there probably done.
Click to expand

Is asking "Do I need new sails?" analogous to "Is it time to reef?" (I.e. if you ask yourself the question, the answer is yes)
Likes: Whatfiero1 and DaveJ

Catalina Capri 22 San Francisco
Thanks guys - yeah, I figured it's probably just time for sails - what do we think of these replacement sails on catalina direct?

This is the original 1996 Mainsail. Is the shape still good or is it time to shop for a new mainsail?
forums.sailboatowners.com

I’m a sailmaker. I posted an analysis of what a sailmaker with a trained eye looks for in mainsail shape.

This is what a really nice mainsail looks like 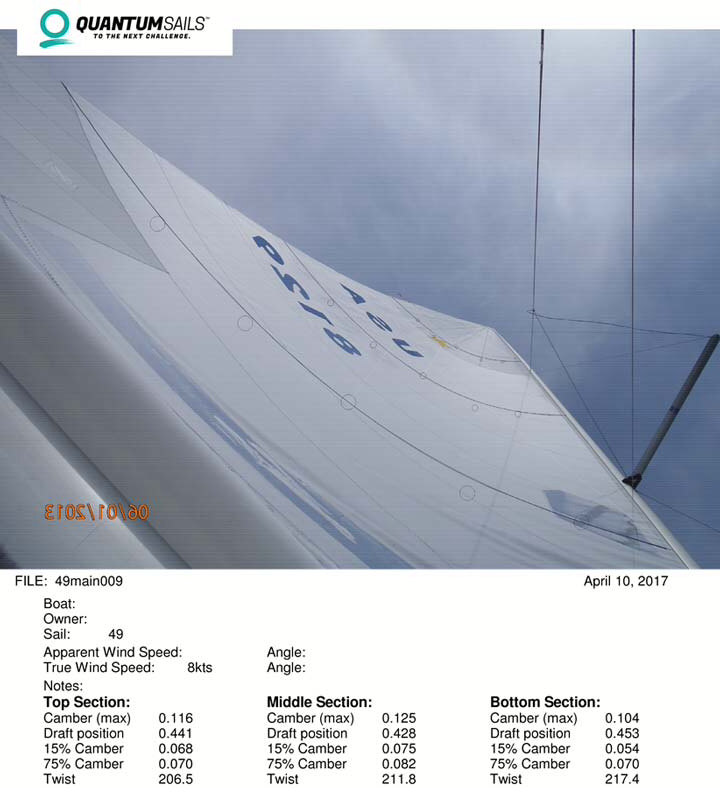 Catalina Capri 22 San Francisco
Yes @DrJudyB , that's a very nice thread - I can't get my main anywhere close to that flat, but I don't have any good pictures really. I might get out this weekend, I'll post a pic, might be educational.

And from my limited experience, I'd say the boat performs rather poorly - heels in gusts and/or heads up, and it doesn't like to point upwind. I'm a n00b in sail trim and whatnot as well, so that probably doesn't help, but it's hard to learn probably if your sails are crap.
Likes: DrJudyB

If you go out, take some pics! Here’s a link with instruction on how to do it properly so I can use software to analyze the draft.

Catalina 270 255 Wabamun. Welcome to the marina
Not to poop on an idea, but a cunningham or an adjustable backstay isn't going to do squat to resolve a sail that isn't going to play nice. 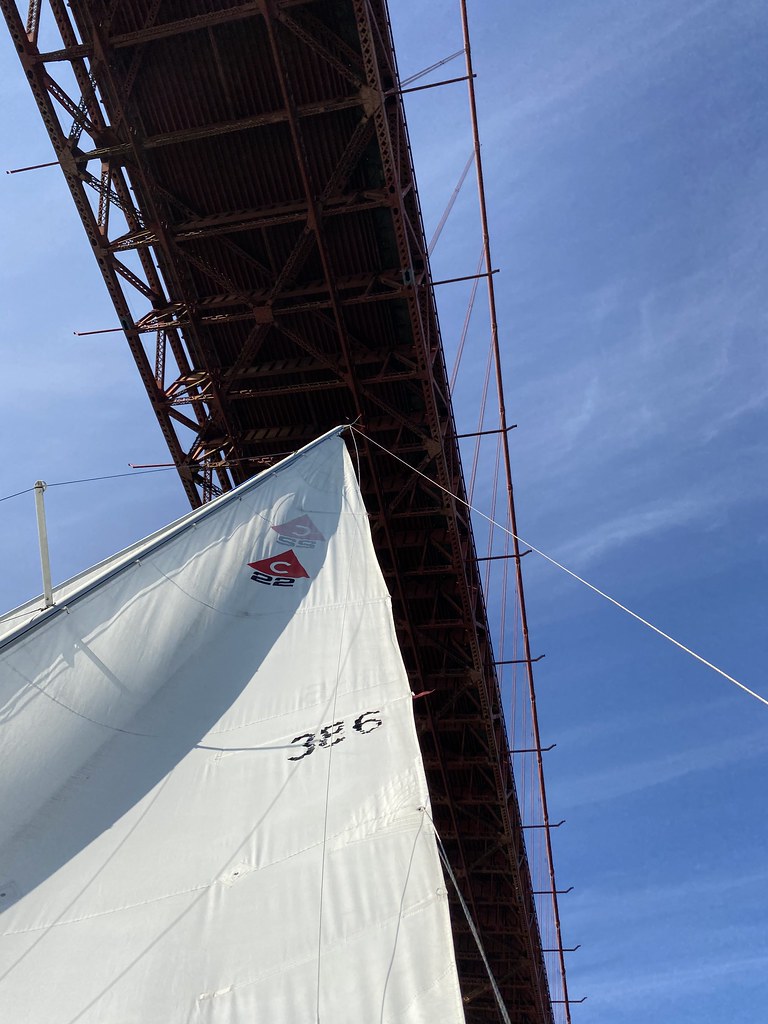 Explore this photo album by Matt Billenstein on Flickr!

The main is pretty spent - Judy had a good laugh looking at these photos Note, I had forgotten to ease the topping lift, so that probably doesn't help... 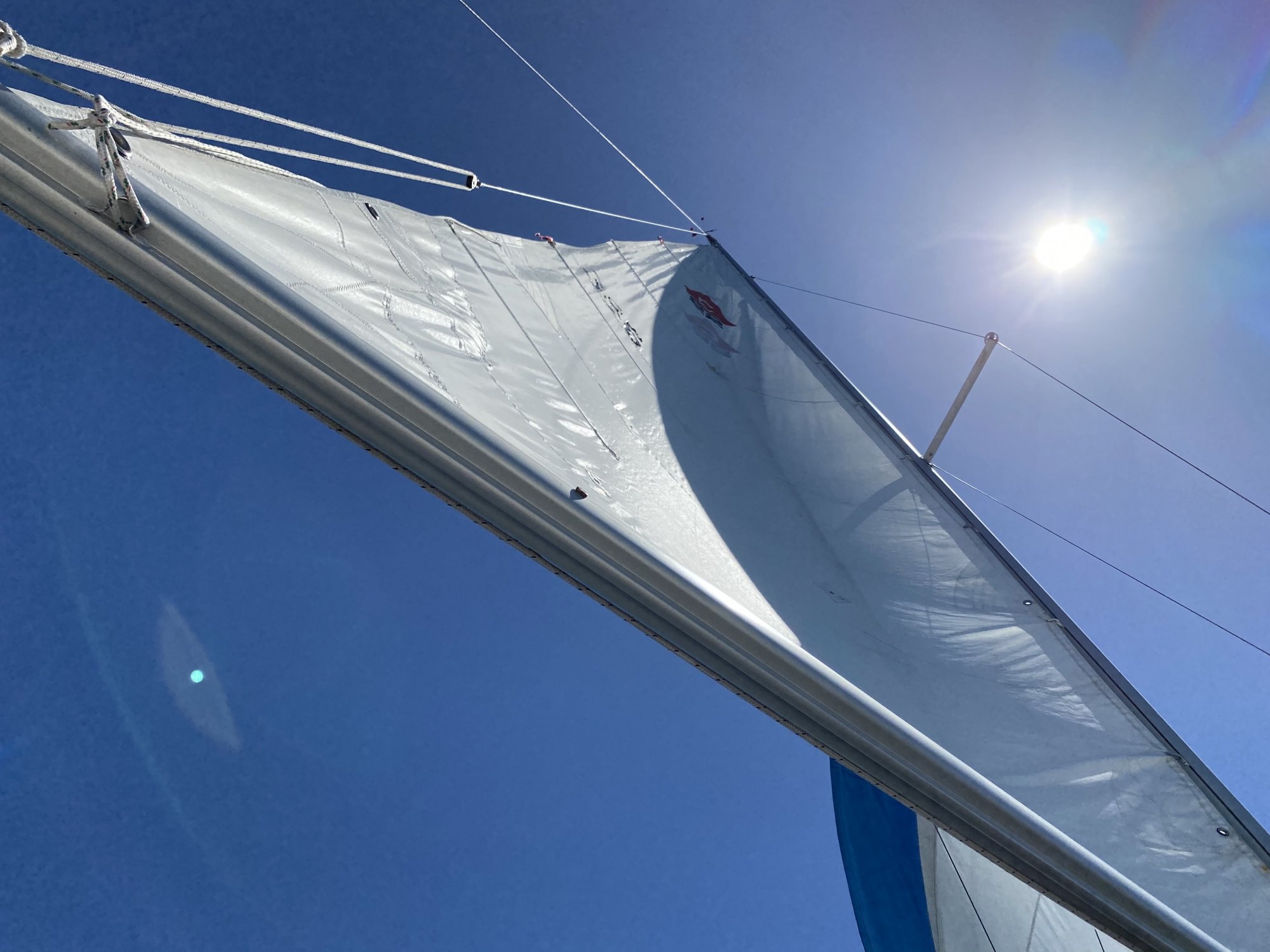 Corsair F24 Mk1 003 San Francisco Bay, CA
I fitted a curve to the reef points at about 25% up from the foot of the sail. It's better to fit the curve to a draft stripe, but the reef points give a reasonable guide to the depth of the draft.

The draft is jaw-droppingly deep at about 17%. 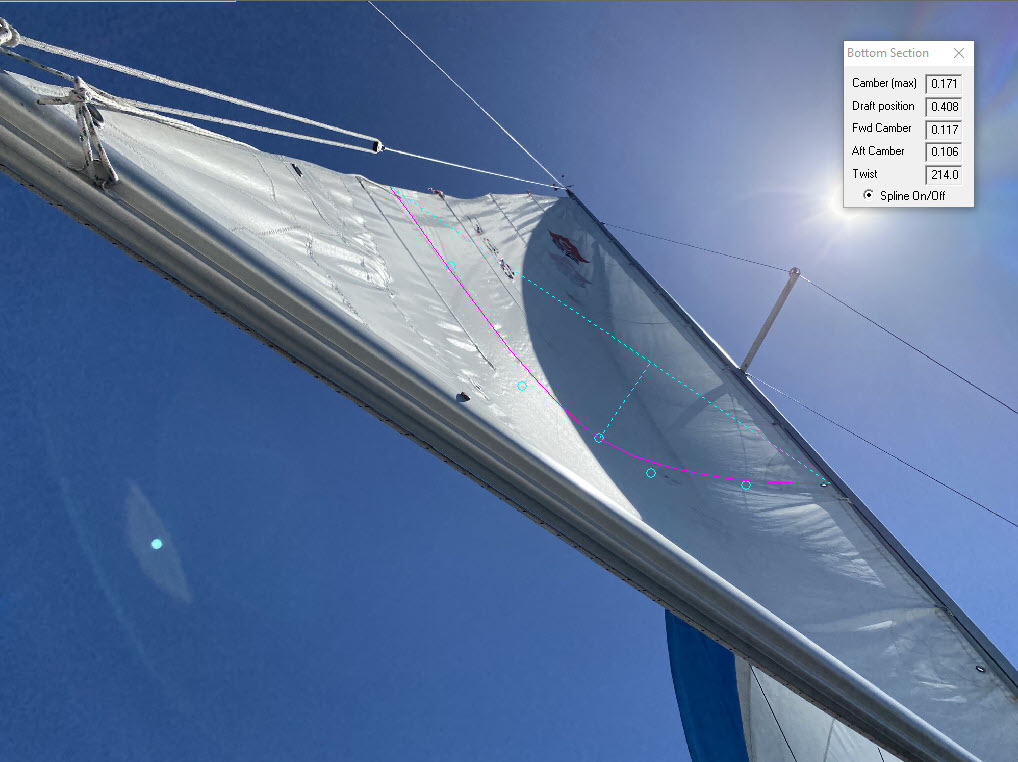 Merit 22- Oregon lakes
A quick and dirty way I've observed worn out sails is to look at the angle of the boom wile sailing. a blown out sail will hang the boom low.
[shrug] .02
Likes: DrJudyB

RussC said:
A quick and dirty way I've observed worn out sails is to look at the angle of the boom wile sailing. a blown out sail will hang the boom low.
[shrug] .02
Click to expand

when the boom hangs low at the aft end, it’s usually because the bolt rope in the luff has shrunken significantly. Since the leech hasn’t gotten shorter, the aft one of the boom hangs lower than the front end.

Russ’ comment is about the bagginess you get from a shrunken boltrope. With a shrunken bolt rope, the draft looks baggy because it’s like the gathering on a curtain. It’s a specific type of bagginess, very close to the front edge of the sail.

You can have a stretched out mainsail, without necessarily having a droopy boom. Matt’s sail has super deep draft due primarily to stretched out, super soft cloth, with most of the resin broken down.

Matt’s mainsail shows a very slight amount of shrinkage of the bolt rope. His boom is not noticeably droopy. The shrunken bolt rope contributes to the overall bad shape but it’s not the only cause.

Matt sailed over to visit me at my marina yesterday, and I took a look at his sails. They are worn out, both the stitching and the cloth. The Dacron is soft to the hand and the resin is completely broken down. The the Dacron cloth is stretched out every where on that sail. It’s soft enough to use as a bedsheet, LOL. It’s way past time for new sails for his boat.

Catalina 270 255 Wabamun. Welcome to the marina
How to tell? When you cross the start line first, do everything right and cross the finish line dead last.
Likes: mattbillenstein and jon hansen

Meriachee said:
How to tell? When you cross the start line first, do everything right and cross the finish line dead last.
Click to expand

I don't race, but I've been definitely getting passed by everyone out on the bay! haha
Likes: Meriachee
You must log in or register to reply here.
Share:
Email Link
Top Bottom