Hunter 22 Pelham Manor, NY (1981 H22)
Hello All, I have a 1981 Hunter 22 and the rudder got messed up the other day when I ran aground. The block inside is twisted and the downhaul broke. Before I try to take this thing apart and re-rig it can someone describe what I am supposed to see and have to make this work? Diagram, photo, video, verbal description appreciated. Maybe Crazy Dave Condon are you out there?? 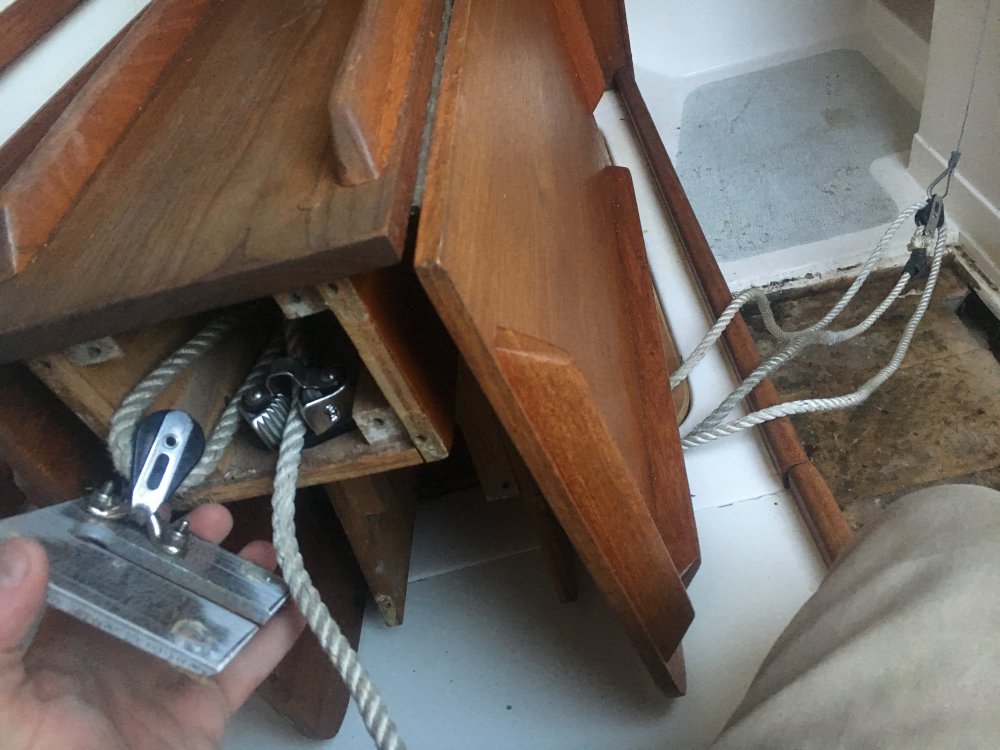 Hey there that's the swing keel. How do i rig the rudder?

Hunter 22 Groton
Howdy @newsailor130,
I DO own the same boat and year (1981 H22), BUT it did not have a rudder (and other things) when I bought her, as she was a salvage boat. What I CAN offer you is what I did to replace my missing rudder. Please see my thread in this forum for additional information at the following: Need Rudder and swing keel dimensions

If you don't want to replace the entire rudder due to cost, as it was a bit over $1K, don't give up, because there are PLENTY of other 1980s H22 owners listed at this site. See the attached listing updated in OCT 2020.

Let me know if I can help in any other way.

Hunter 22 Groton
Es ist später,
In the meantime, the best I can do is attach some pix sent to me by Brian Savulis a number of years ago.
They're not all that detailed, yet who knows, you may see something that helps...

Hunter 22 Groton
Wait, there is more...or less...
Attached is a file of misc hand-drawn modifications and replacements I did on my boat back in 2008. Some of the pages refer to the OEM rudder dimensions / configuration and have some notations that MAY help in your reconstruction.

Hunter 23 Lake Wallenpaupack
That looks very similar to the H23 rudder assembly. Can you take a pic of the rudder itself, that shows more of it's outline?

Assuming it is the same basic design, keep in mind the rudder, that obviously swings toward the rear, will want to float so it is horizontal with the bottom tip toward the rear. The line is used to hold it in the deployed (down) position. The rudder obviously is bolted inside the aluminum head using the bolt through the hole in the head and the rudder, so the bolt is sort of an axle letting the rudder swing up and down. The H23 rudder has a U shaped fitting attached to I think the rear upper edge (that is why a pic of the whole rudder would help). A line is tied to that, goes down inside the head, out through the sheave in the back side of the head, up and through the cam cleat above the sheave. You pull up on that line, through the jaws of the cleat, hauling the rear part of the floating rudder back and downwards so it swings into the deployed position, then lock it using the cam cleat. Maybe around a 3/8 line, I can't recall but look at the width of the sheave and cam to get an idea of what diameter. I used a line with a braided cover, not a 3 strand. If you hit an object the line gets shredded as it is pulled backward through the cam jaws as the rudder kicks up.

You may want to fix up the hole for the bolt through the rudder with some fiberglass. I found an aluminum tube with inside diameter just right for the bolt and glassed it into the hole, careful to keep it at right angles through the rudder, to reduce gouging of the glass. You may also want to have something welded to the head, or maybe enlarge the holes through the aluminum to fit some sort of insert, if the holes in it are reamed out.
Likes: SeaTR and newsailor130

Let me know how I can help...
Likes: newsailor130 and Crazy Dave Condon
N

Hunter 22 Pelham Manor, NY (1981 H22)
"I used a line with a braided cover, not a 3 strand. If you hit an object the line gets shredded as it is pulled backward through the cam jaws as the rudder kicks up."

Yes, that's the issue. Apparently, I have to use some sort of sacrificial element. I have a 3-strand in there that is simply too strong. I need A thin line that will break. also, I found this hinged cleat that will open and release. I might use that. But the system you describe is exactly what I have. I am just wondering how they came from the factory? ON other boats, Some poeple apparently use friction instead of leaving the downhaul in the cleat, using rubber washers and wing not on the axle bolt to keep the rudder down using friction, but allowing it to kick up on impact. I am not sure how well that works, but I am curious if people do it.
You must log in or register to reply here.
Share:
Email Link
Top Bottom