Hunter 30 Snug Harbor, Lake Champlain
That is such a beautiful part of the world!

That was fun. We have anchored in many of the same places, though with less rain then they had!

And we were fortunate to see Lacy Falls with a little more water.
Likes: Will Gilmore

Catalina 30 Mk II Barnegat, NJ
@jssailem , thanks for the lesson on the phone this morning.
[/QUOTE]
@Michael Davis, Thanks for warming @jssailem up Thursday morning. He then spent several hours teaching me the same thing Thursday afternoon. OpenCPN and inputting the trip's GPX files on my MacBook is pretty cool.
Likes: Michael Davis

I have spent some time identifying conditional cruising routes and timing of passages in discussion of this adventure. While the sheltered East side of Vancouver draws many boaters to explore the inside passage, I see our trip as really a trip of two sides. Requiring different sets of skills.

While all of the west side and especially the Northern end can qualify as rugged and wild, there are 2 exceptional areas of focus when being on your game is important. We have talked about the Cape Scott/Nahwitti Bar currents and entering the Pacific Ocean challenges.

The last couple of days I have been focusing on the Brooks Peninsula, Cape Cook and the rugged coast line. I recently read a book about a solo kayaker who cruised these waters. He shared the concerns of weather, fog, swell, waves and the wisdom of patience. Listening to the wind in the trees, climbing the bluffs to watch the storms whip up a Peaceful ocean into a frenzy, where crashing waves smash in to rocks throwing water, logs and surf a hundred feet in the air. How sitting in a tent while rain pours down is preferable to being out on the water.

One of the tips I gathered from the Speakers at the boat show about cruising down the West Side, was to listen to the weather. Get a sense of the conditions over several weeks. Look for patterns that develop.

I have been doing that and while still lacking confidence in predicting the weather I have been getting better at deciding when not going out to sea might be a preferable decision.

Here is the weather conditions for today the 23 of February off the coast of Cape Scott. Last night and this morning early would have been BRUTAL.

Beneteau First 38 Lyall Harbour Saturna Island
Not much fun beating into that! Lets wait for a W to NW O.K.?
Likes: jssailem and jon hansen

CAL 35 Cruiser Portland OR, moored EVERETT WA
I would strongly agree Michael. Besides we have your weather diviner on board (Bev). It sounds like it would be wise to listen to her suggestions.
Likes: Michael Davis

Now our adventure down the West side of Vancouver Isle begins. This part of the cruise will be a mix of exploring the 5 sounds that reach into Vancouver Island’s interior, then open onto the Pacific Ocean and Open Ocean passages around headlands that have challenged mariners since the 1700’s.

The area is remote yet has been explored since the 1700’s by Russian, Spanish, and English sailors. All have left their mark and their names on the land of the First Nation.

We will travel down Quatsino Sound back to Winter Harbour finding a safe anchorage near Matthews Island and shelter from the open ocean and its weather. Winter Harbour offers some amenities should we need to replenish our provisions.

Our anchorage near Winter Harbour gives us a great location to await a good weather window for the rounding of the Brooks Peninsula, our next major passage. 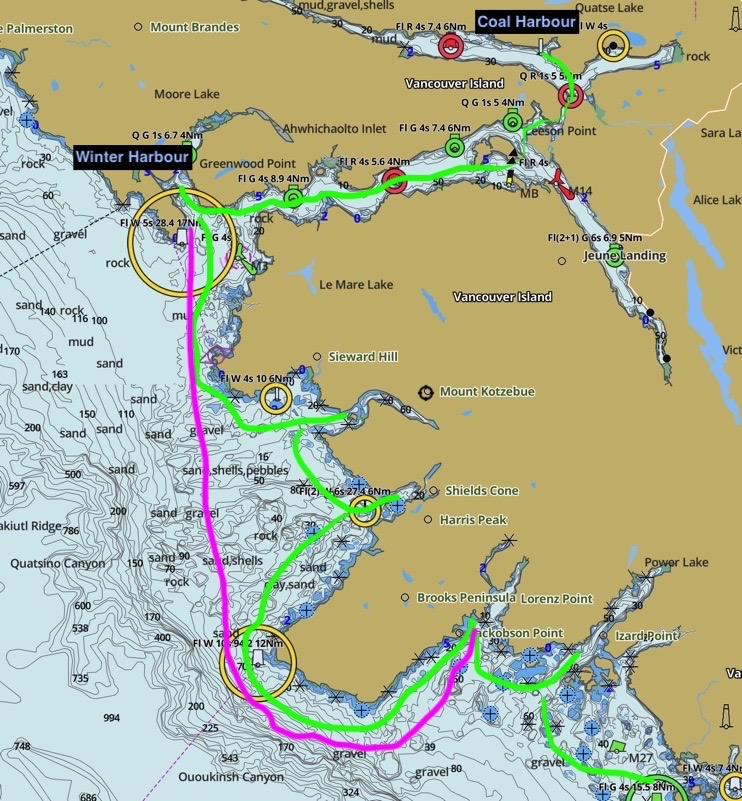 There are 2 options open to us for Brooks Peninsula.
Once around Clerke Point we can head East sheltering behind Brooks Peninsula into Nasparti Inlet and find Columbia Cove (sometimes called Peddlers Cove). It is a good place to shelter from a North West Gale.

Next on our list of places to explore are the Bunsby Islands of the Malksope Inlet. The Bunsby’s are said to be Rocky, rugged and beautiful. Checleset Bay is reported to have a large population of Sea Otters. Once hunted to near extinction for their pelts to trade, they are back due to the successful results in 1969 to reintroduce them. 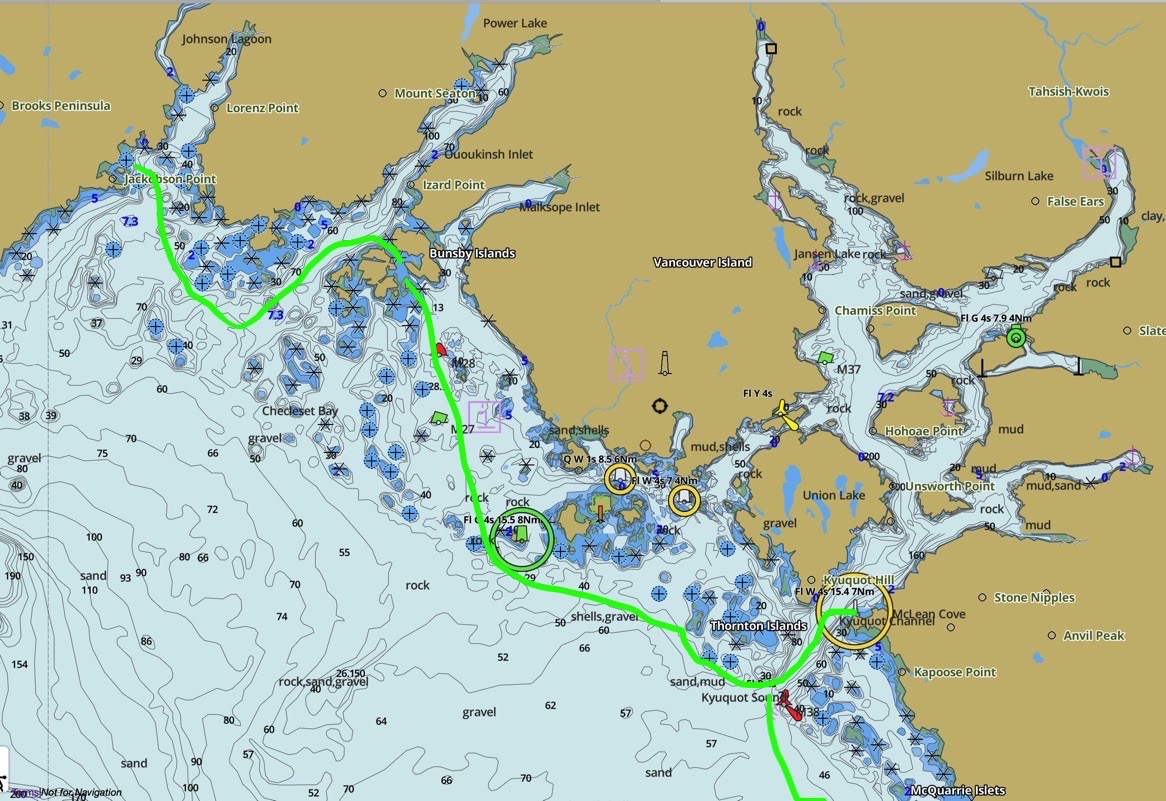 We leave the Bunsby’s for Kyuquot Sound and an anchorage behind Rugged Point and the Rugged Point Marine Park. Depending on our crews, Kyuquot offers several places to visit. Fair Harbour Marina, Dixie Cove, Petroglyph Cove (sometimes called Blue Lips Cove due to the water temps), Hankin Cove, and others. At this point in the trip our Sundowner gatherings will include discussions on our next stops, as we find our way.

From Kyuquot Sound we venture back into the Pacific and head to Esperanza Inlet on the northern side of Nootka Island. Nuchatlitz Provincial Park offers safe anchorage in the bay east of Rosa Island. This was once an Indian village and offers much to explore about the First Nation tribes that once occupied this area. 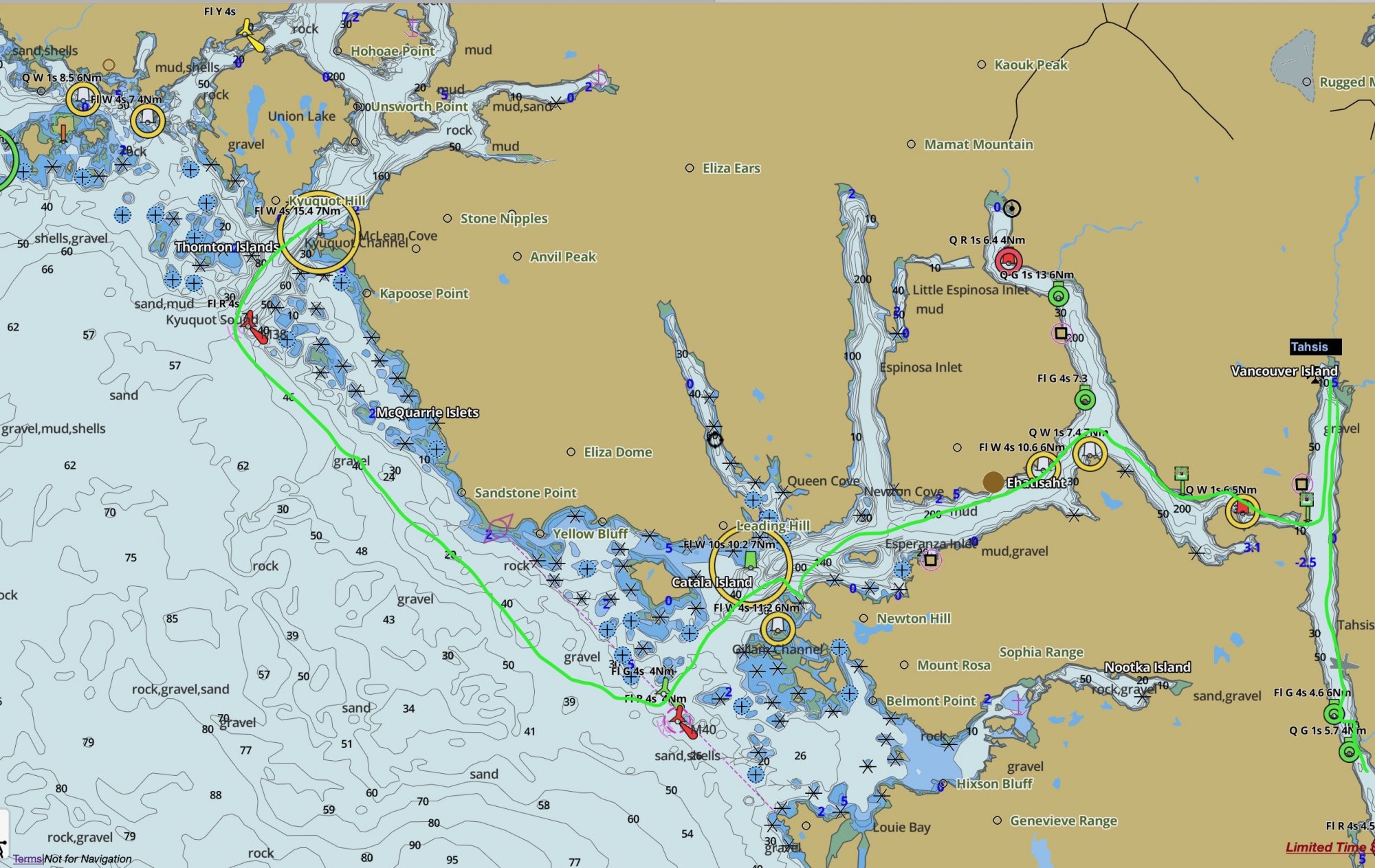 Our plan is to head up Esperanza Inlet thru Hecate Channel, Tahsis Narrows and to the town of Tahsis at eh head of Tahsis Inlet. Tahsis is a sawmill town that once thrived on the timber of the area. This site offers us an opportunity to replenish our provisions. The Waggoner’s Guide says the restaurant has live music and steak dinners. Perhaps it is a place to take a break?

Our route back to the ocean takes us down Tahsis Inlet to Friendly Cove Yuquot Point. A sheltered bay is the location where Captain Vancouver and Quadra met in 1792 where they attempted to negotiate the final details of the Nootka Convention where in Spain relinquished to England their claims to the Northwest Islands. 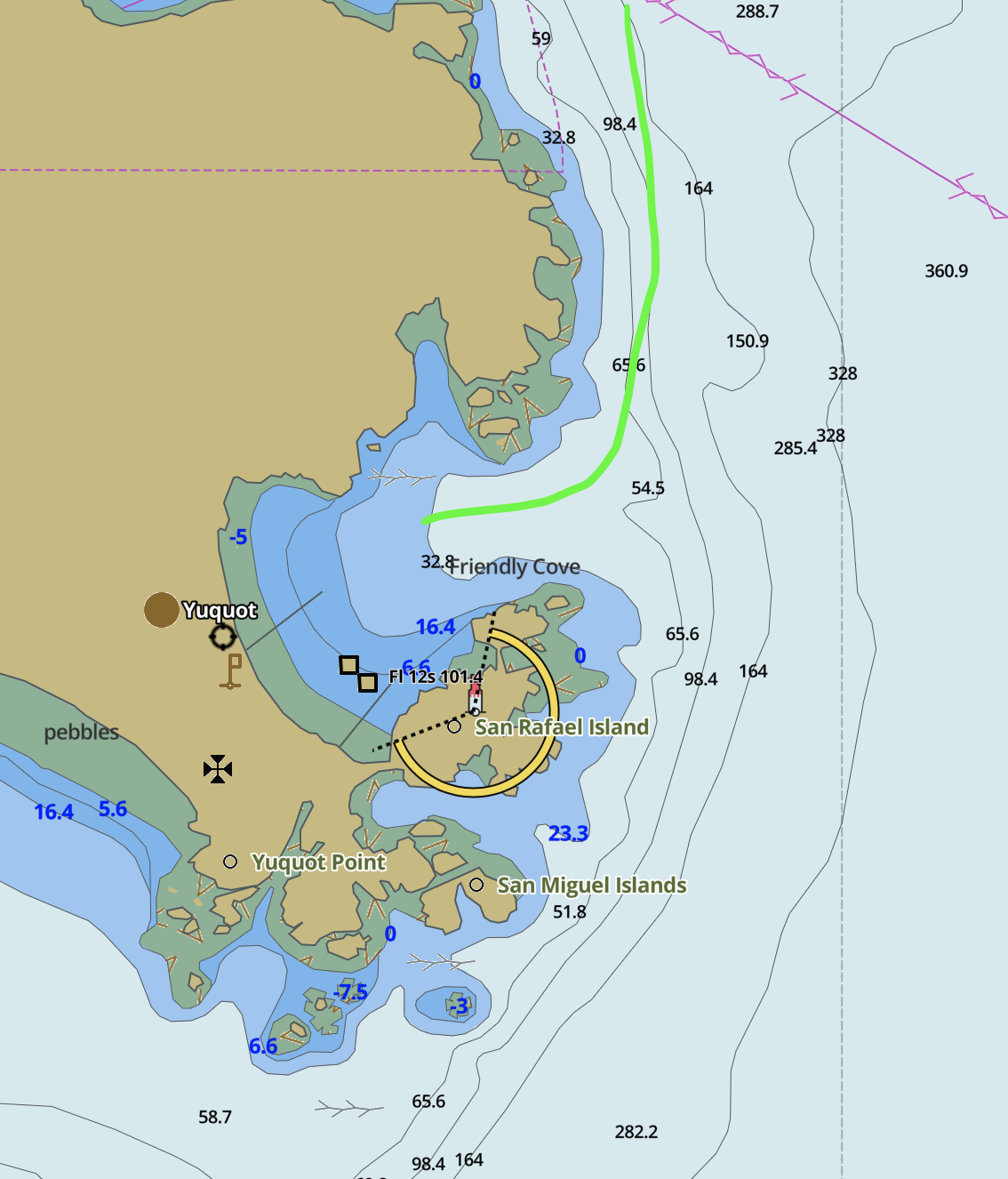 By this point we have completed about 24 days of travel around Vancouver Island, not counting layover days. We are about two thirds of our way through the cruise and are now beginning to see the more settled parts of the West Side.

Next up will be Hesquiat Peninsula and the rounding of Estevan Point.
Likes: Will Gilmore, Michael Davis and jon hansen

View from the church at Friendly Cove

The lighthouse at Friendly Cove
Likes: Ward H, Will Gilmore, jssailem and 1 other person

CAL 35 Cruiser Portland OR, moored EVERETT WA
We can renegotiate the English/Spanish Treaty...

jssailem said:
We can renegotiate the English/Spanish Treaty...
Click to expand

I don't believe the first nations would be dumb enough to give it away again! We may be in for a fight unless we negotiate to give it back.
Likes: jssailem

CAL 35 Cruiser Portland OR, moored EVERETT WA
I grew up in the generation who said... Make love not war...Since it is not mine it might as well be theirs.
Likes: jon hansen and Michael Davis

I would like to think I have some share in it but others may disagree......
Likes: jssailem

Well leaving Yuquot Point (Friendly Cove) we venture back into the Ocean to round Hesquiat Peninsula and Estevan Point.

The night before we will have decided to carry on to Hot Springs Cove,

or once clear of Chief Matlahaw Point on the South end of the peninsula steer our boats east and look to cross Hesquiat bar and explore Hesquiat Harbour. ​

​
At the east end of the Harbour is an anchorage called "Boat Basin". Located on the shore between the basin and Rae Lake is Cougar Annie's Garden. Waggoner's Guide ( Cougar Annie’s Garden in Hesquiat Harbour - A Special Place on West Coast Vancouver Island - Waggoner Cruising Guide ) provides an interesting description of this settlement. Started in 1915 by Ada Anne (Cougar Annie), her Husband and 3 children, Annie (over 70 years, bearing 8 more children and out living 3 more husbands ) cleared and cultivated a successful "Mail-Order" garden nursery. The Boat Basin Foundation is restoring the expansive gardens. ​
​

​
Just another of the many wonders that await the curious on the West Coast of Vancouver Island.
Likes: Will Gilmore and jon hansen

Catalina 30 Mk II Barnegat, NJ
As John develops and posts the route plans for this sure to be amazing trip, I'm thinking about changing my plans.
Originally I was going to join the group in Nanaimo, stay on for the trip around Cape Scott and depart for home in Coal Harbour.
Then about a week ago I decided to join John in Everett for the very start of the trip. After a conversation with John I decided I would arrive a few days before departure so I could help with provisioning and preparations.
Today I was re-reading the thread and thought "I have no obligations in July so why not keep going?"
So after a little more research and another conversation with John, I decided to go as far as I can.
My only other cruising experience was last winters Extreme Winter Cruise. Can I handle 3-4 weeks cruising? Sure. Can I handle 6-8 weeks cruising?
Only one way to find out.
Likes: Will Gilmore, Michael Davis, Hello Below and 2 others

The question isn't can YOU handle 6-8 weeks. It is Can JOHN handle you cruising 6-8 weeks.
Of course, if he can't, there is always the Plank!
Likes: Will Gilmore, jon hansen, jssailem and 2 others

Catalina 30 Mk II Barnegat, NJ
Awwww, I'd hate for him to have to walk the plank off his own boat.
Likes: Will Gilmore, Michael Davis and jon hansen

Catalina Catlina 310 Campbell River BC
Just remember if John fails to make the turn to Cap Scott the next stop is Singapore, that's where Ward comes into play.
Likes: Ward H
You must log in or register to reply here.
Share:
Facebook Twitter Email Link
Top Bottom