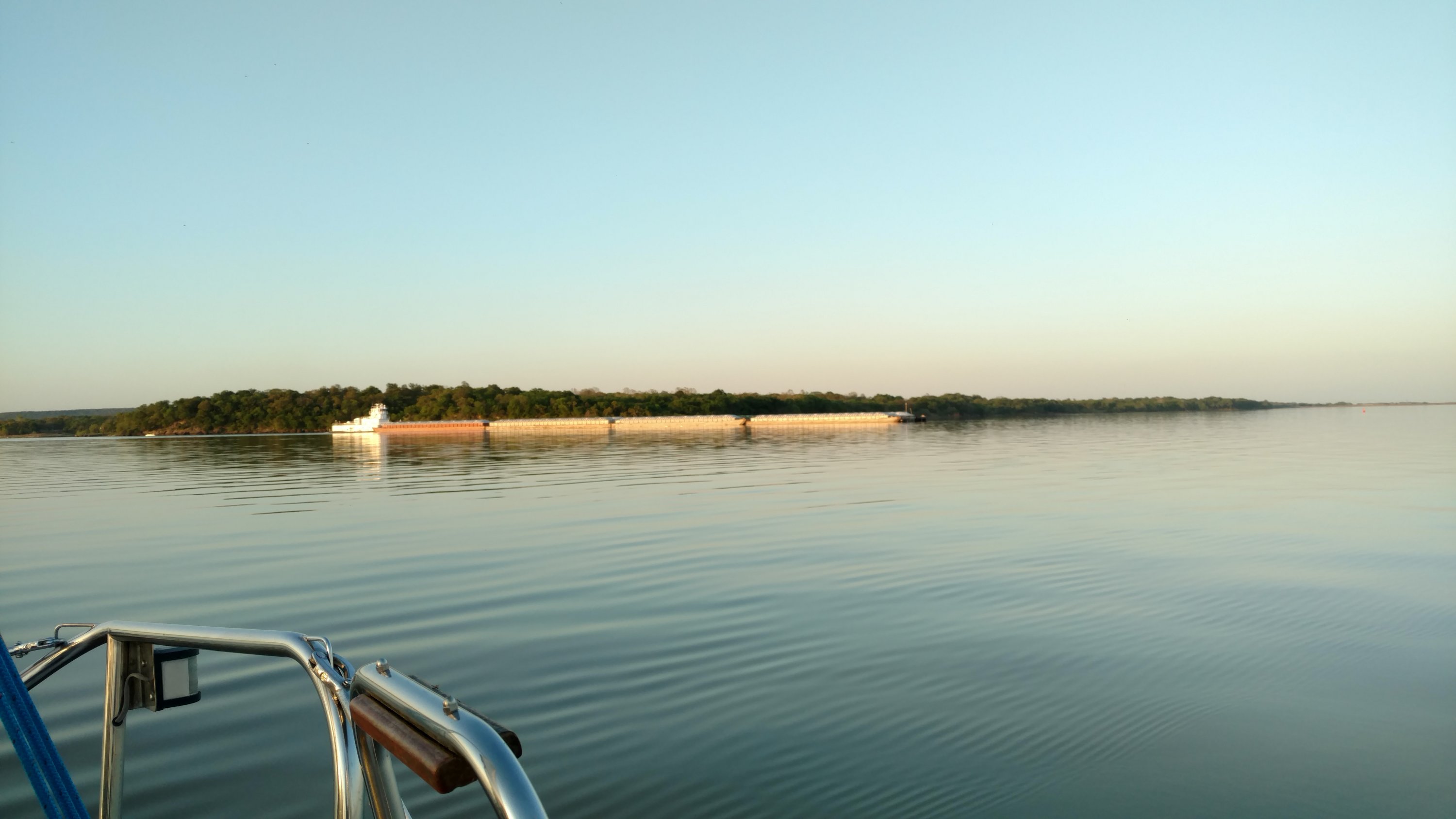 What is the proper etiquette while sailing in the vinicity of barge traffic?
Yesterday I went out for a late afternoon sail hoping to catch the evening breeze for a moonlight sail.
As you can see in the pic, the wind was very light although I was still making slightly greater than one knot while I was crossing the narrow channel.
As the barge rounded a corner about 500 yards from me, I could here his engines back off to idle speed. At first I attributed the quietness due to the tug turning directly away from me.
But after observing him for awhile, I noticed he was operating a greatly reduced speed. Later, it occurred to me that he might have been waiting for me to give him safe maneuvering room. Finally this was confirmed by his two blasts then I heard his engines rev up again.

Now I am conscience of the fact that the tug captain is out there making a living and I would no way intentionally cause any disruption to him performing his job. Had he hailed me on the VHF I would have made my intentions known. I even would have started my engine to clear the channel quicker if that would have increased his comfort level.

While it is hard to judge distance over water, how much separation should I have maintained between us? My thinking was that as long I am operating outside of the channel I wouldn’t be impeding his movement. He might have thought differently.

BTW, after the sun set, the wind did pick back up for a great moonlight sail. 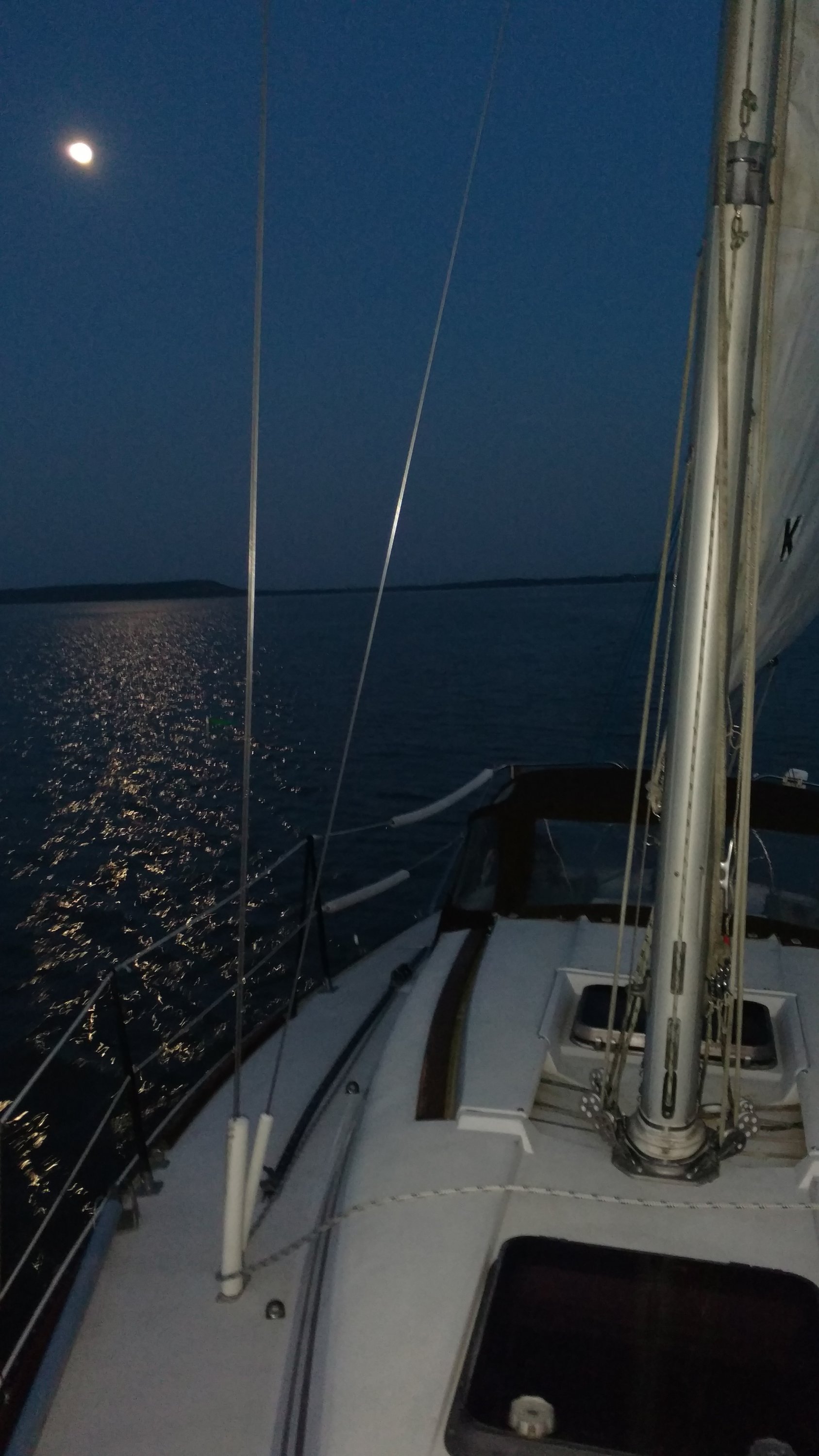 The barge captain may not expect smaller sailboats to have a VHF or to have it on, so he didn't hail you. Or he may have slowed down for some other reason. He likely has radar and has been tracking you.

1961 Rhodes Meridian 25 Texas coast
I always use the VHF and try to ask the tow what he'd like me to do to stay clear. The two blasts on the horn was to tell you to stay on his starboard side
And in our waters, we see MANY tows. Often very up close and personal.
But the skippers are almost always very helpful. I've run the Gulf ICW some 10 times, counting both ways, and recall ONE jerk 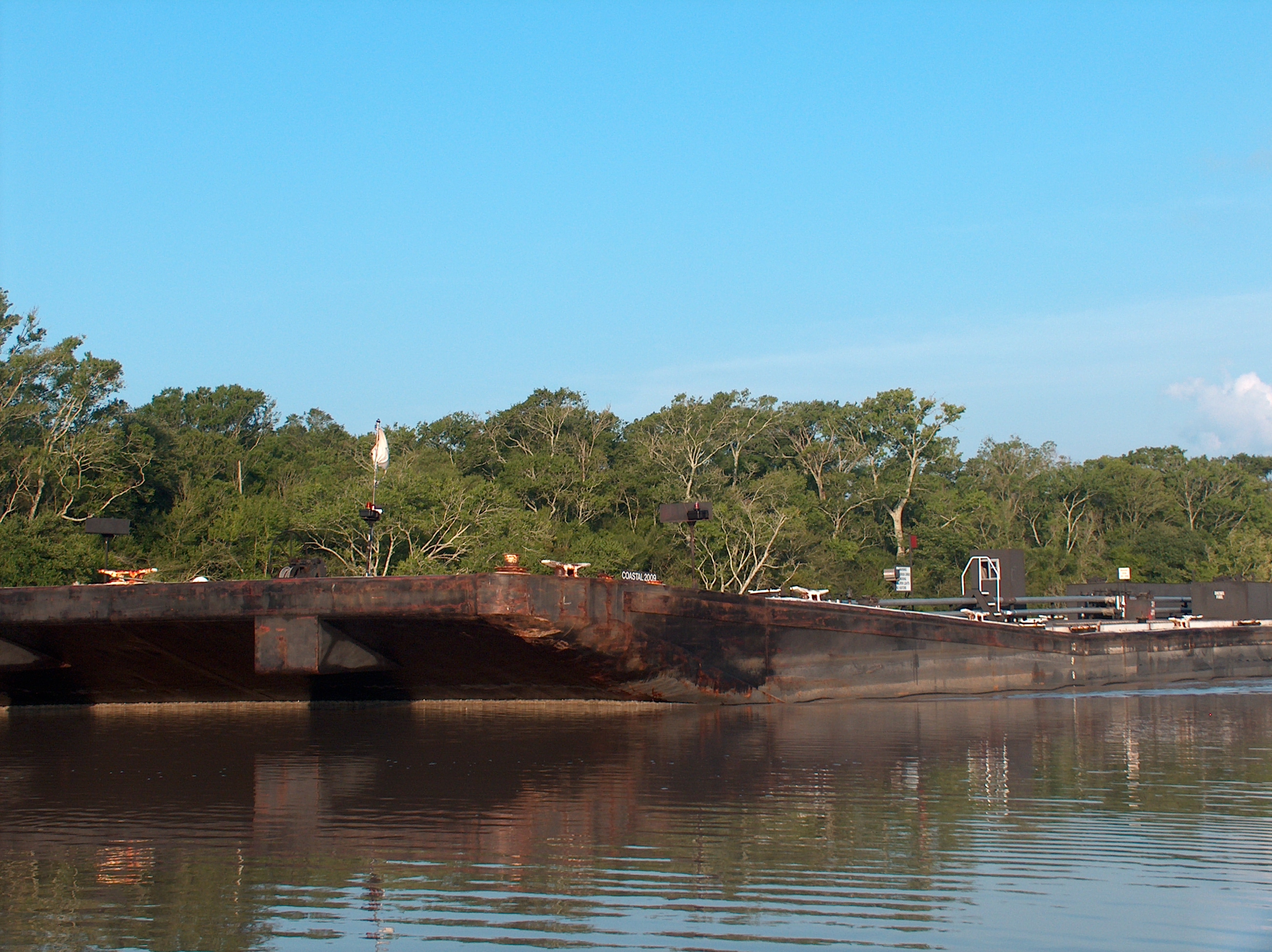 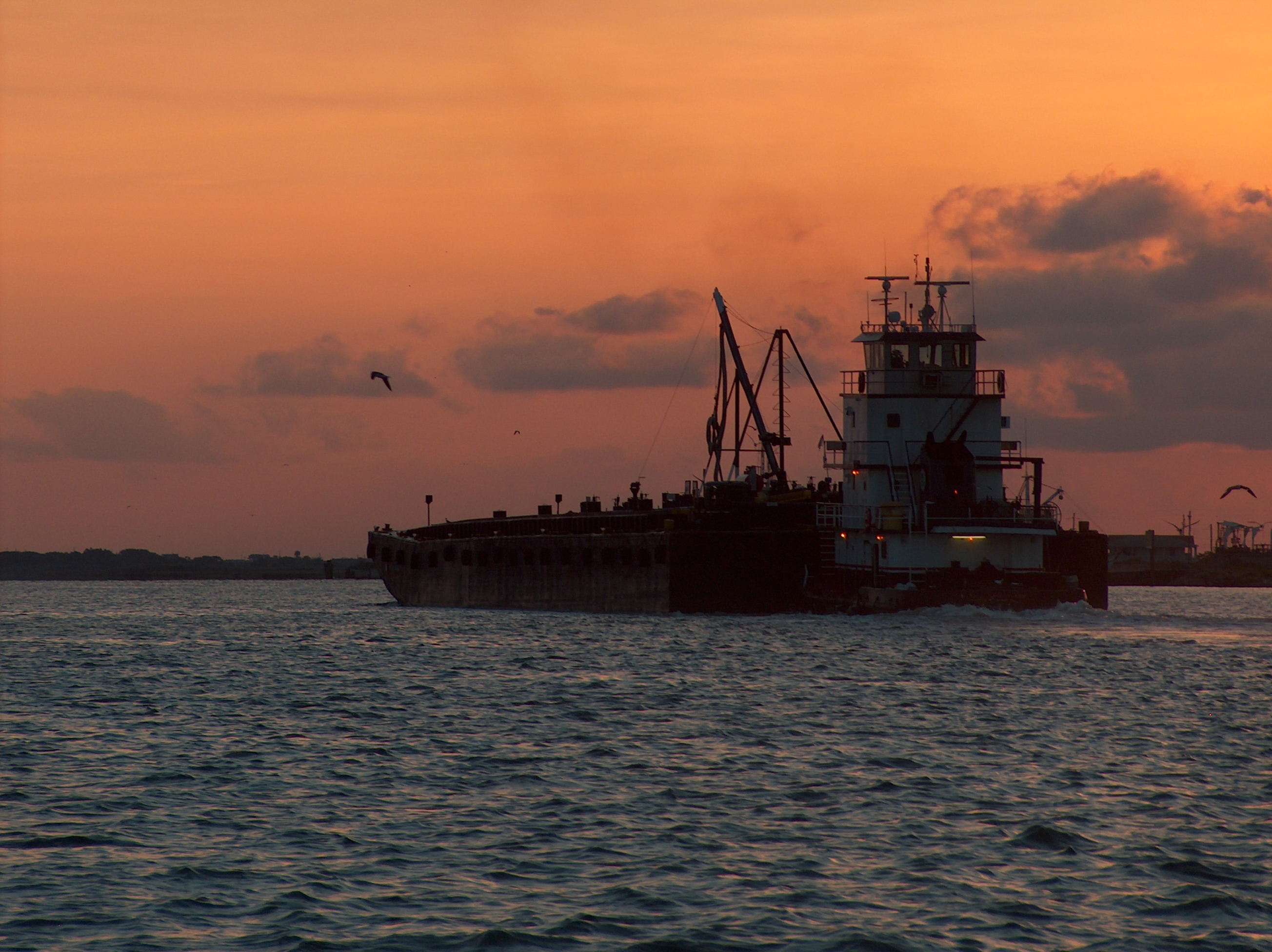 Pearson 530 Admiralty Bay, Bequia SVG
Quite often, especially in rivers or the ICW, tugs and barges are operating on the very edge of control. Rounding bends or setting up for a bridge when the current is running, they may not have the ability to avoid another craft. Therefor obviously, one should keep well clear of them and not expect them to be on the most obvious course.
If a tugmaster does not contact you, either by sound signal or radio, you can assume you are not of concern to him. These captains are not shy and have no compunction about letting other vessels know that they are standing into danger.
Perhaps this captain was being courteous or had slowed for other reasons, but when the time came he obviously let you know, in no uncertain terms, what his intentions were. Starting your engine and changing the circumstances may not always be the wisest course of action. Signalling your intentions, either by radio or sound signals, is usually the best course of action, if you are uncertain of the intentions of the other vessel, in these circumstances.
Last edited: Apr 29, 2018
Likes: jon hansen

Beneteau 411 Oceanis Annapolis
Don’t be shy. Learn VHF radio protocols and use your radio. Pilots and Commercials appreciate the comms and it is a mark of the prudent mariner. Start on Ch.13, move to Ch.16 if you get no answer. Most of them scan both.
Likes: jon hansen

Hunter 430 Waveland, MS
I would suggest the barge was using "Rules of the Road" per COREGS Rule 34.
2 Bells, 2 Whistles, or Two Horn Blasts [ short ones ] when rounding a corner or obstructed view.

It looks as if the barge was slowing to make his Port side turn.
Jim...

Hunter 430 Waveland, MS
I hear Ch 16 barge/ship traffic referring to passing another Vessel...
"I am passing on your TWO" [referring to Two Horn blasts].
Jim...

Cowpokee said:
While it is hard to judge distance over water
Click to expand

That's an astute observation. However, one can learn to overcome this lack of knowledge with experience and little book learnin'. If you have a chartplotter you can check distances to known objects. If you don't, you should have a paper chart which lets you do exactly the same thing. In this example the tug was "across the water from you" much closer to the far shore than you were. How far is that far shore from your boat? You CAN find out, at least now that you're home.
I always wondered "how far away" is the other guy or that shore that's getting closer. I used SDT calculations, charts, chartplotters and a bit of reading of any good navigation/coast piloting book. You NEED to learn this stuff for safety. There are a bunch of distance off tricks in Chapman's. Even my old log books had them in the front sections.

Before you go out next time, check how far across the riverbanks are where you normally sail. That's a good starting point.

Good news? After a while you can tell the distance. You can even tell how big another sailboat is when it's too far away to read the sail insignia. You learn these things. Why? Because by your question you are curious and interested in learning. Other folks don't know what they don't know but don't care. Those are the dangerous ones.

O'Day 34-At Last Rock Hall, Md
Ditto most of what was said above, however 13 is for bridge to bridge so I use that channel exclusively for communications to a ships bridge. Like me, I think they tend to tune out the inceastant chatter on 16. As Capta pointed out, if you were of concern to him, he would have let you known.
Two things to remember; one, barges are big but not always deep so they frequently sail outside of channels and two, they don't always pick you up on radar as a friend of mine discovered sailing in shallow waters on the Delaware bay one night with a reflector hoisted. He was ok but, later learned some more fiberglass repair techniques.

Hunter 28.5 Chesapeake Bay
Golden Rule #1: If it's bigger than you, and can hurt you, turn away right away.

Nor'Sea 27 "Kiwanda" Portland/ Anacortes
There are two sets of rules in the Colregs so be aware. The central point is that these rules are not the same.

Pearson 530 Admiralty Bay, Bequia SVG
If you understand that from 6 feet the horizon is only 2.6 nautical miles away, judging distances becomes much easier.
Likes: jon hansen

Warren Milberg said:
Golden Rule #1: If it's bigger than you, and can hurt you, turn away right away.
Click to expand

Actually, if you are the stand on vessel, it may confuse the other vessel's operator to do this. Your responsibility is to maintain course and speed until such time that you believe there is a valid reason not to continue on your course.
Likes: jon hansen

Charles Erwin said:
There are two sets of rules in the Colregs so be aware. The central point is that these rules are not the same.

capta said:
Actually, if you are the stand on vessel, it may confuse the other vessel's operator to do this. Your responsibility is to maintain course and speed until such time that you believe there is a valid reason not to continue on your course.
Click to expand

In this case, it was a barge in restricted waters vs. a 26 foot sail boat. The barge is the stand on vessel because it is constrained by size and maneuverability.

1961 Rhodes Meridian 25 Texas coast
An important point- between Galveston Texas, and New Orleans La, all traffic in the ICW runs on ch 13. You could be wasting your time on 16 in that stretch.

Secondly, since AIS has been required on all commercial vessels, the tows often won't answer unless you call them by name.

The general idea is that inland rules have more to do with actual bargain making between vessels whereas international rules have do to with announcing the signaling vessel's intentions.

Your quote as to international and inland labels got reversed but I take your point in a meeting/crossing case with the possible exception of the actual and binding right of way given to downstream bound vessels in certain inland cases. There is no right of way counterpart in international rules.

Charlie Jones s/v Tehani said:
ICW runs on ch 13. You could be wasting your time on 16 in that stretch.
Click to expand

Most modern FM Marine radios have a "Scanner" to scan preset channels fast.

FM Ch16 monitoring is required by all barges for hailing and emergency.

All craft must have a sound making device.

"A vessel of less than 39.4 feet (12 meters) must, at a a minimum, have some means of making an efficient sound signal i.e., handheld air horn, athletic whistle, installed horn, etc. A human voice/sound is not acceptable."

Hunter 30 Everett, WA
I've hailed commercial traffic a few times and they have always been grateful for the contact, even if it's just to say I'm keeping clear.

dlochner said:
In this case, it was a barge in restricted waters vs. a 26 foot sail boat. The barge is the stand on vessel because it is constrained by size and maneuverability.
Click to expand

My comment had nothing to do with this case. Just because another vessel is significantly larger, that doesn't relieve the smaller craft's operator of the responsibility of doing what is expected under the rules.
I hate it when people do this to me. I never know if it is a drift in concentration, or a serious move to avoid a situation, even though it is not their responsibility. The rules work pretty well, if everybody plays by them.
Likes: Hello Below and jon hansen
You must log in or register to reply here.
Share:
Email Link
Top Bottom