Hunter 306 Pasadena MD
This is a report on our just completed 6-day charter in the Apostle Islands of Lake Superior. We chartered a 44' Jeanneau out of Port Superior marina just south of Bayfield, with me and my wife plus 4 crew for the first 3 days, and swapping out for a different 4 crew the last 3 days. Basically: we had great weather: mostly 5-10 kts of wind from the East, shifting to the W and NW over the week. Plus, a couple of bouts of exciting and unexpected weather shifts which gave a hint of danger to the trip. We started with a short leg to Presque Isle Bay on Stockton, where we anchored for the night and went for a hike. That gave the new-to-boating crew a chance to get used to the dinghy in benign conditions before we did the sea caves. The next day, up to Devil's Island, where we did 2 shifts of dinghy visits to the sea caves all around the north tip of the island. As recommended by the check-out captain, we did not try to anchor at Devil's, but tooled around with the mother ship while the dinghy was exploring. Here's the last part of one dinghy trip:

More pictures to follow as I have time and internet.
Likes: cb32863
J 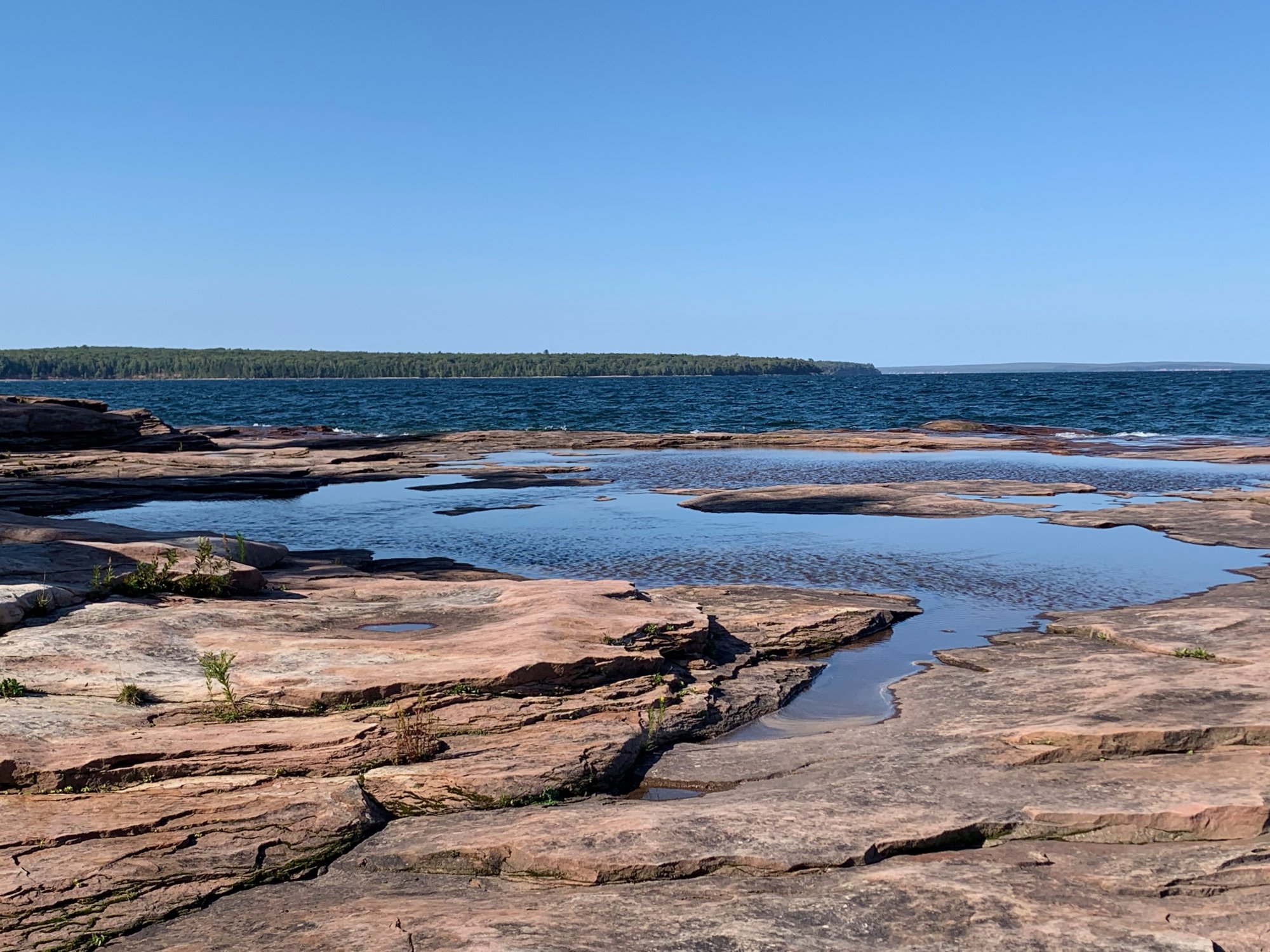 The tip of Presque Isle peninsula. 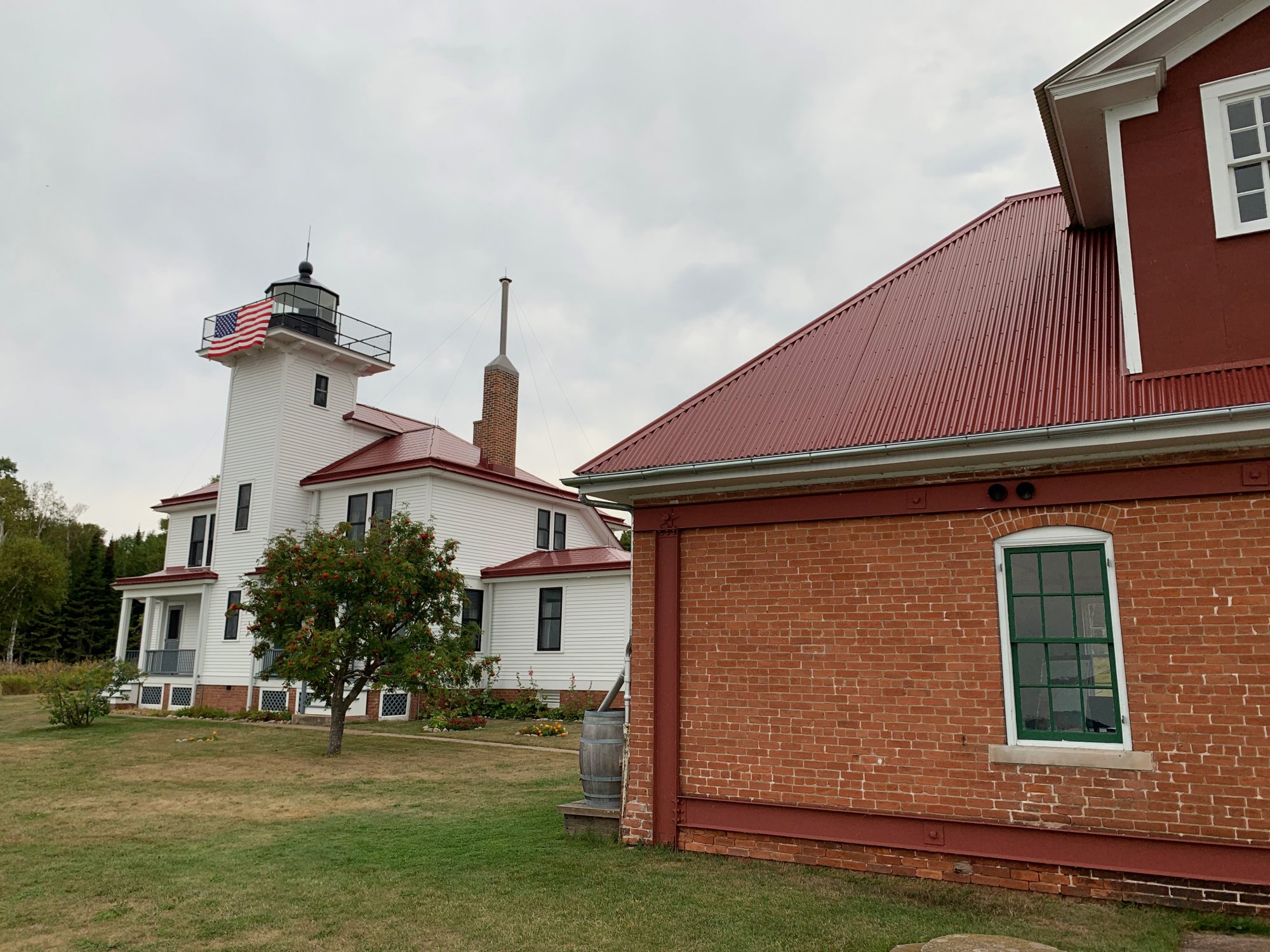 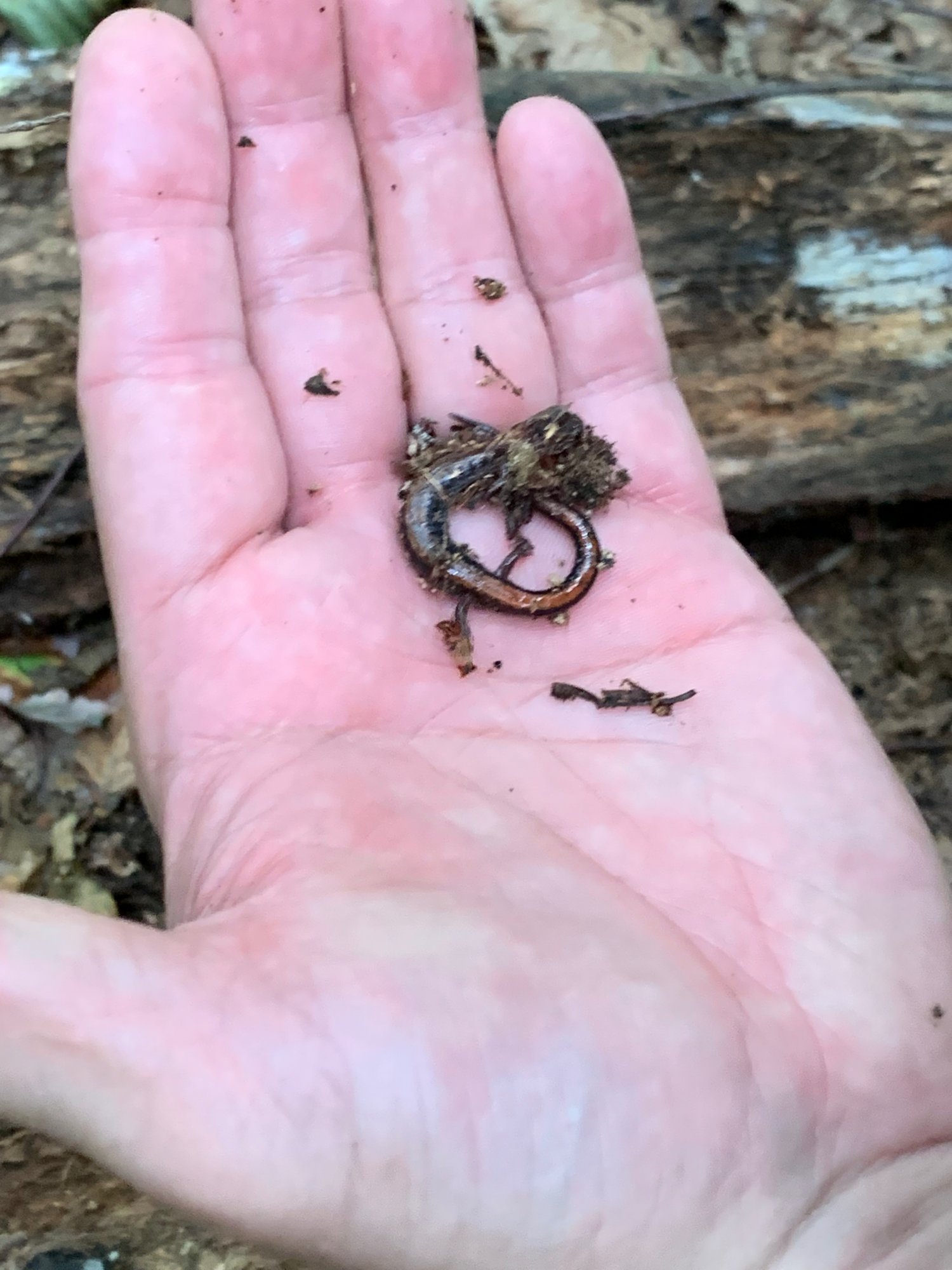 A salamander on Oak Island. 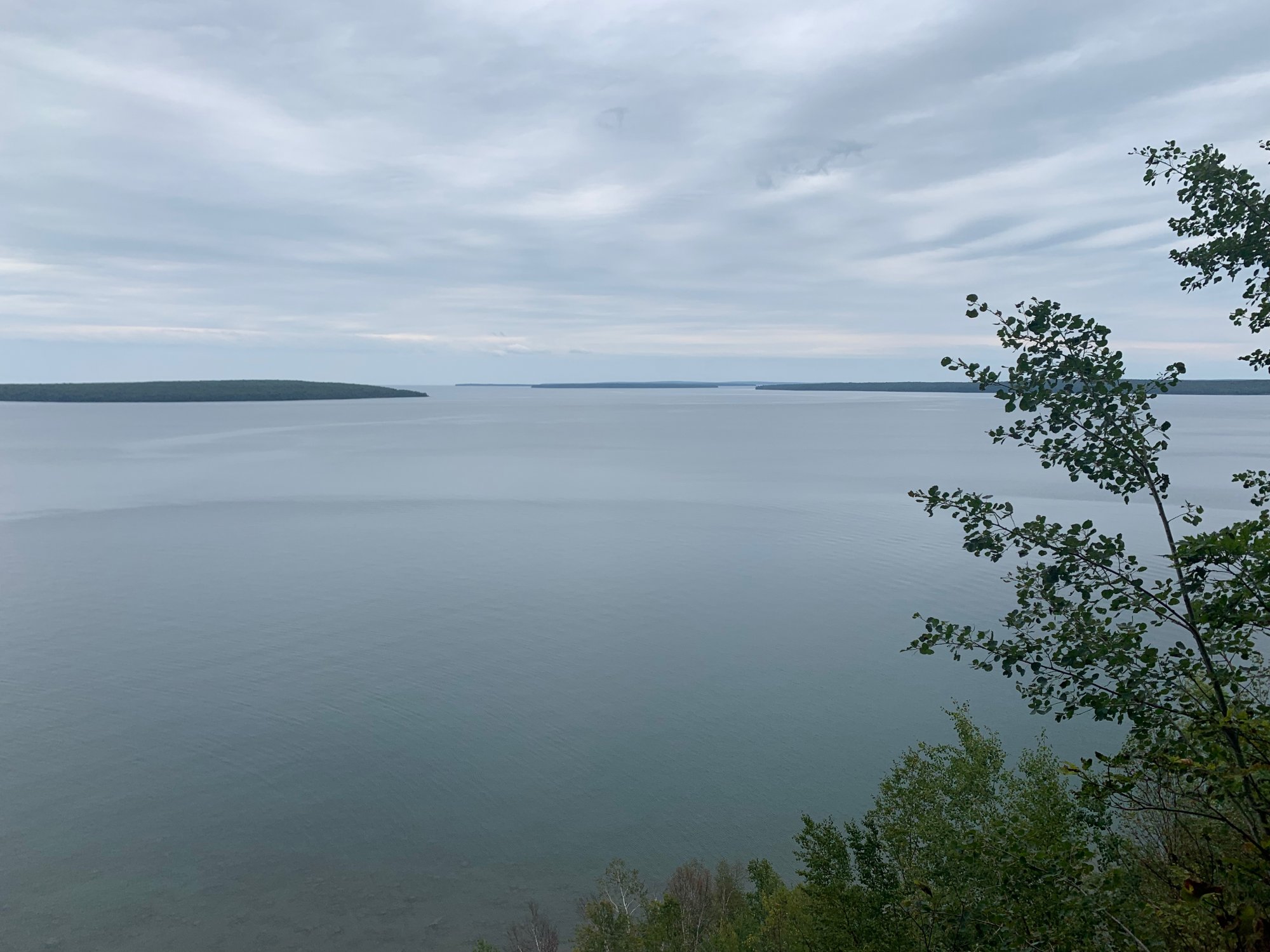 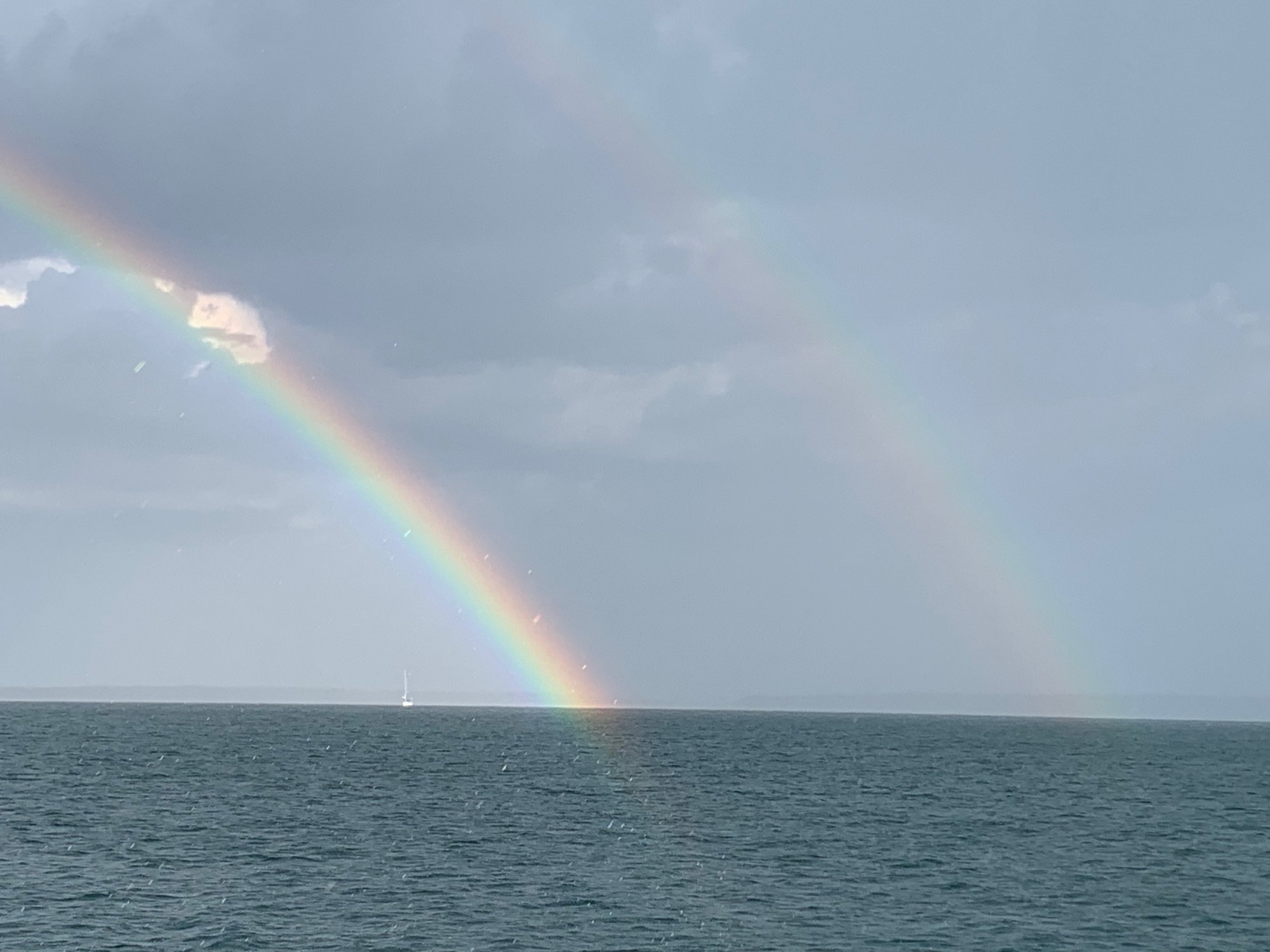 A double rainbow off of Rocky Island. We had just gotten out of the water from a (brief/cold) swim, when a squall came out of nowhere, with sudden wind and rain.

Our anchorage (from iSailor...). 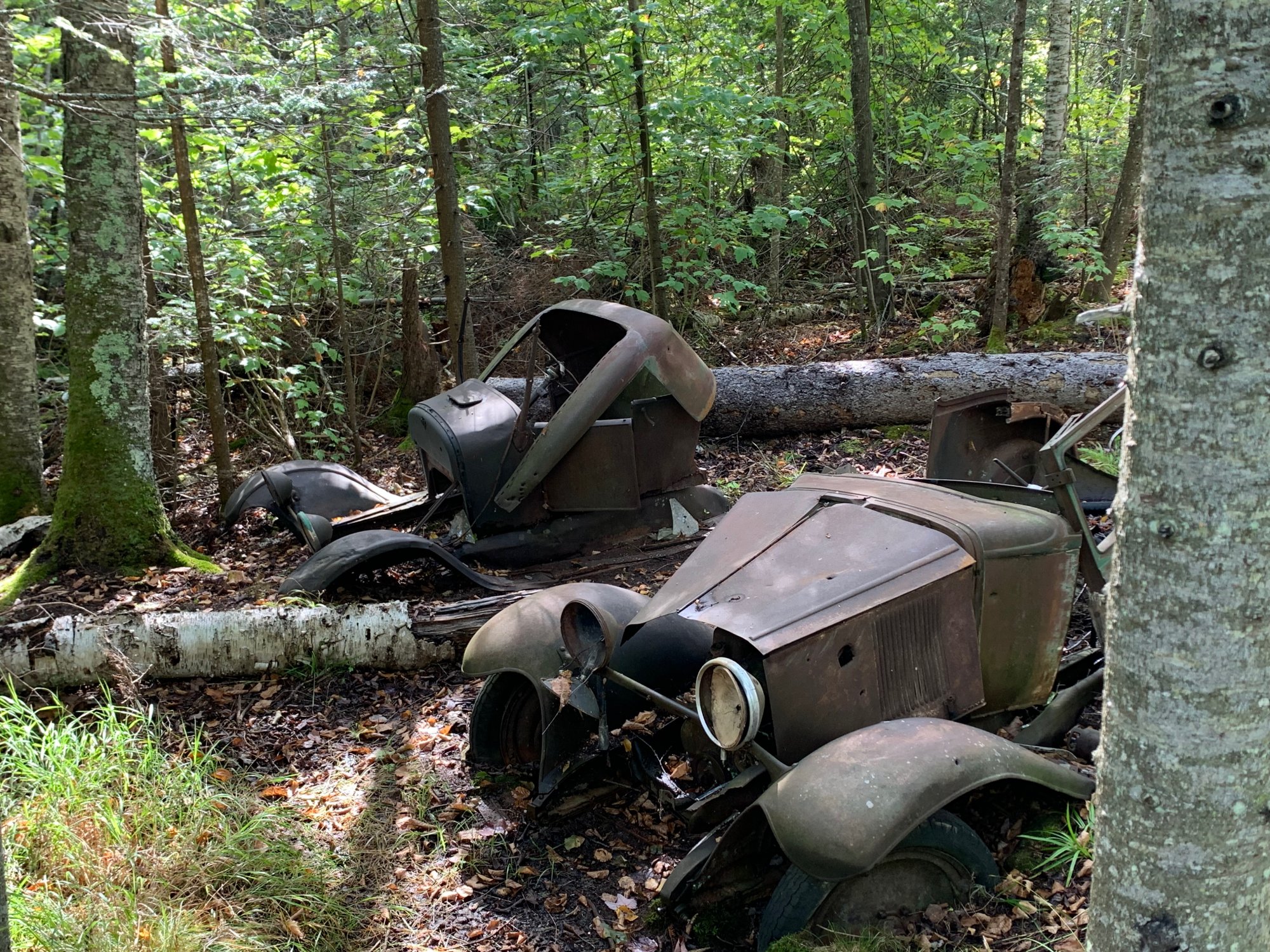 An old model-T and 1930 Chevy coupe on Sand Island. 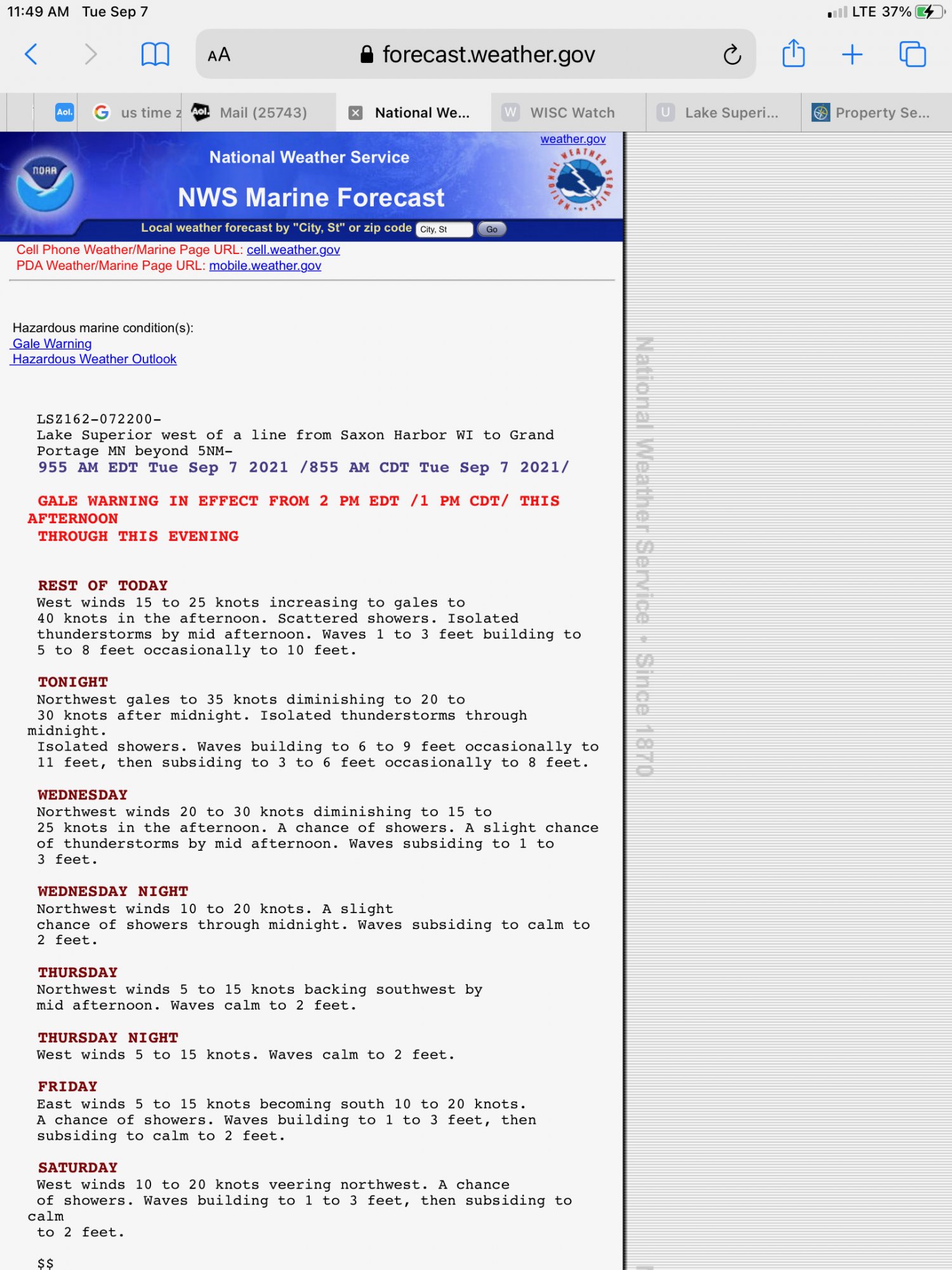 We were off the boat by Monday (Labor day). Here's the forecast for Tuesday. Dodged a bullet there...
Likes: swshogren, jssailem, DArcy and 4 others

jaysweet said:
That gave the new-to-boating crew
Click to expand

Love the Apostles! Did any of your crew have sailing experience, or were you and your wife the only ones?
J

FDL S2 said:
Love the Apostles! Did any of your crew have sailing experience, or were you and your wife the only ones?
Click to expand

For the first group of 6, one of the guys had taken small boat sailing lessons, and the other guy had crewed many years ago on a trip to the Bahamas and another trip or two. So some basic boating familiarity, but nothing significant. The second group of 6 included my daughter and son, who have been out with the family on our boat for 17 years. My daughter spent quite a bit of time with me last summer sailing and trying to come up to speed on handing our Hunter 306. There was a basic understanding, though, that I should try to avoid falling overboard and drowning.
Likes: FDL S2
J

Hunter 306 Pasadena MD
We just got back from the trip, so here's a review of (perhaps) the more interesting parts: the rough weather bits. The first 2.5 days, we anchored at Presque Isle Bay on Stockton, and then went up to tour the Devil's Island sea caves the next day. It wasn't exactly calm, but 5-10 knots from the east (forecast: our wind instrument died most days after 10 minutes or so) was fine for using the dinghy to explore the sea caves. When I went in the dinghy, I did give control of the mother ship to some only moderately experienced crew, but they did fine, basically just shadowing us in 30' or so of water off the island.

After 2 dinghy trips, we anchored on the W. side of Raspberry island and dinghied ashore for a tour of the lighthouse and a hike. The 3rd day, we anchored off of Oak island, and took 5 of the 6 of us ashore in 2 dinghy trips for a long hike. All this time, the forecast and (as far as I could tell with no wind instrument) the actual weather was 5-10 from the east. As we returned to the dock, I was surprised and somewhat concerned to see that the wind had changed to the SW and gotten quite strong. The dingy trip back was really wet and a bit exciting: I ferried both parties. We were then scheduled to return to the Port Superior marina to swap crews out. The wind instrument worked for a couple of hours, and showed that we were bashing straight into 25-29 knots apparent: rather a wet ride, with spray washing up onto the dodger. This wind shift was not in the forecast at all, but it definitely caught my attention.

With the new crew, and with winds forecast to pick up (eventually) to 15-20 from the west, we made a beeline for the Devil's Island sea caves, hoping to have the second crew get to see them the first morning before it got too rough. By the time we got up there (a nice sail on and off), it was looking a bit sketchy to have the dingy in the caves on the west (weather) side of the island. So I diverted around to the east side, and let them dingy over in the lee of the island. I told them to turn around when it got too rough, which happened at the north point, as I had expected. It went well for my (~30 y.o.) kids!

We anchored for the night in the protected cove on the east side of Rocky Island, with a forecast of 15-20 from the W and NW. South Twin Island gave some additional protection from the lake to the east of us, so it was pretty reasonable overnight. We did experience another completely unexpected sudden squall from the west just after we had climbed out after a swim off the stern. Really strong winds and rain for about 15-20 minutes. I guess the forecast weather is "just, like, your opinion, Man..." on the Big Lake, to quote the Dude.

We bashed though the waves the next day over to East bay on Sand Island for a rather rocky overnight anchorage the next day. Got in 2 trips to the sea caves over there (at least part of them), and had our first experience of the famous biting flies of the region, but just in the dinghy for some reason: no problem at anchor.

Anyway: it was a really nice charter, with just enough rough weather to get my attention, but not so much that we didn't have fun. (One person was mildly seasick, but no barfing, thankfully.) My wife wants to move to Bayfield now...
Likes: Scott T-Bird and FDL S2

Catalina 320 Barnegat, NJ
I think the SW winds at 20+ knots doesn't really need to be in the forecast ... it's just a normal summer afternoon on Gitche Gumee.

If you think you've got blood thick enough for the northern climes, you might check out Munising, Mich. Bayfield is quaint, but I think maybe a bit too quaint for long term. I was greatly impressed with Munising ... and Marquette isn't very far away. I was told that the marina in Munising is a bit too exposed, though, despite the islands outside the bay.
Likes: swshogren
J

Scott T-Bird said:
I think the SW winds at 20+ knots doesn't really need to be in the forecast ... it's just a normal summer afternoon on Gitche Gumee.

If you think you've got blood thick enough for the northern climes, you might check out Munising, Mich. Bayfield is quaint, but I think maybe a bit too quaint for long term. I was greatly impressed with Munising ... and Marquette isn't very far away. I was told that the marina in Munising is a bit too exposed, though, despite the islands outside the bay.
Click to expand

Well, reading about unexpected weather shifts and experiencing them in unfamiliar territory are two different things. No complaints here: it was good to have a little challenge come up now and then. Rough enough to teach, but not so bad that we had to flee back to the marina. 40 knots the day after we left would have absolutely sent me back to base, but that's part of the risk you take with a charter.

We actually stopped briefly in Munising, since we spent a couple of nights on Mackinac Island immediately before Bayfield. We just went to a coffee shop and an outdoors store, but we both liked what little we saw of the town. I would think there are more interesting (and safe) destinations within easy distance of Bayfield, though: the south shore of Superior looks like a long slog between safe harbors. Anyway, this is all far off and hypothetical at this point. My wife and I agreed that we would definitely rent for a month in a new place long before we decided to move there.
You must log in or register to reply here.
Share:
Email Link
Top Bottom